More Than a University: ITMO is a Research and Educational Corporation

Known as a science trailblazer and a leader in education in Russia, ITMO University has been making its name in other fields, too, by experimenting with new educational formats, establishing collaborative labs and centers with the country’s top companies, and stimulating its staff to found startups that go on to be accepted into renowned accelerators. Rapid growth and new challenges encourage the university to embark on a new development path – namely, to transform into a research and educational corporation. ITMO’s rebranding plans were unveiled during ITMO.conf, which was held today, on August 30, in Sevkabel Port. 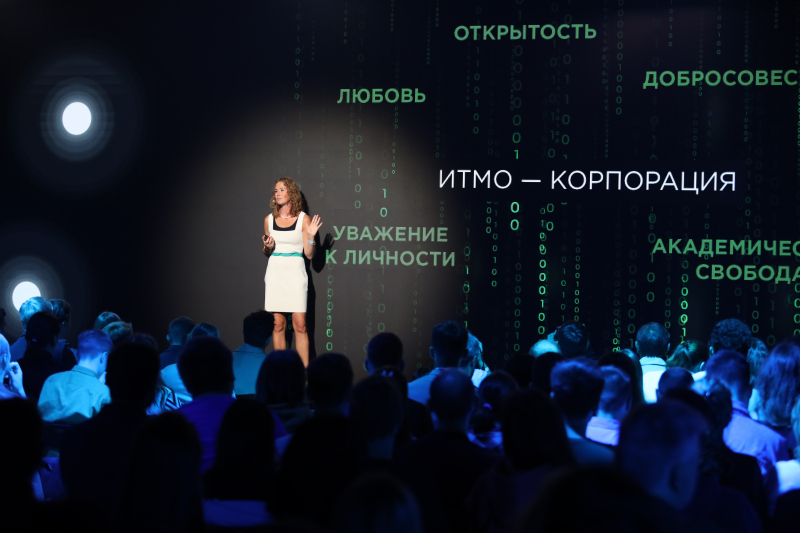 Fifteen years ago, Steve Jobs presented the first-ever iPhone making a revolution in the world of mobile phones. People were struck by the new product that combined the functions of three different devices: a mobile phone, an iPod with a touch-screen, and an internet communicator. With this device, Steve Jobs broke new ground in the mobile industry and once and for all turned Apple into a global icon.

What if such breakthroughs went beyond the IT sector? Could you imagine a university becoming a multifunctional system or some sort of a super-app that merges various wide-ranging services into one: an educational institution that trains new generations of specialists and an advanced research center that develops new educational formats, produces solutions and technologies for industrial partners and its own use, as well as creates an inspiring environment?

Eight years ago, ITMO University started evolving as “More Than a University”, thus building partnerships with tech giants and innovating education. This experience, together with new objectives brought by ITMO’s 2030 Development Strategy, inspired a total rebranding of the university’s style and development model, which was announced today at ITMO.conf.

Following the university’s spirit, the conference was held in a rather unconventional format. With its neon lights, cyberpunk-inspired music, and stylized projects, ITMO.conf was not anything like traditional meetings of university academic councils, but was reminiscent of major high-tech presentations.

System interface: inside a research and educational corporation

If a university can develop like a super-app, this begs a question: what should be the heart of such an innovative platform? What kind of interface and apps should it have?

Top-level education: students should be able to create their own individual learning tracks and form unique competency profiles.

“Six years ago, we gave a new direction to the 21st century education, which makes our students stand out in the market. We produce new educational products together with such tech giants as Napoleon IT and Netology. We value the time of our students and offer them additional ways to enrich their competencies, for instance, through a bonus track that lets students from any specialization receive a degree in IT. We’re confidently moving towards a highly personalized education where students have a voice and choice in their academic lives,” says Daria Kozlova, First Vice Rector and head of ITMO’s 2030 Development Strategy.

Collaborations: ITMO University closely works with Russian Railways, Gazprom Neft, Tatneft, BIOCAD, and other major companies, which results in the launch of new educational programs and even research centers, such as the world-class innovative industrial center with Gazprom Neft. Guided by successful entrepreneurs, students pick up new skills that go beyond the curriculum, such as product thinking, entrepreneurship, launching startups, and funding investments.

One-of-a-kind environment: when students and staff join ITMO, they find not only a place for their work and studies but also a family, ITMO.Family.

“ITMO is not only about working but also running, cycling, surfing, creating music, singing, and drawing! Sport is our driving force and art is our fuel for new ideas! Together, we’re a corporation of talents,” notes Daria Kozlova.

Openness: this is one of ITMO’s core values that helps build a like-minded community, attract new people, and exchange experience with other companies and universities. ITMO has already hosted two schools for future PIs and helped organize one at Almetyevsk State Oil Institute with the support from Tatneft.

“We’re aiming to reach a high technology readiness level (TRL 7-8) of ITMO’s products. That is something that few universities dare to do. We know that finding talents is a challenge, that’s why we’re constantly and consciously upgrading our educational products. We want to train specialists who are ready to start working right away, as well as cooperate with new target audiences: investors, entrepreneurs, and small and medium-sized businesses,” explains Daria Kozlova.

Apart from an interface, each super-app has a broad choice of functions. Speaking of ITMO, these are four large-scale projects that were presented at the conference: the Advanced Engineering School (AES), the National Center for Quantum Internet, the AI Research Center “Strong AI in Industry”, and a joint world-class innovative industrial center with Gazprom Neft. Moreover, the university’s experts also presented the first results reached within the Priority 2030 National Program.

The Advanced Engineering School is designed to train future principal engineers (PEs) or engineering leaders who can apply a data-driven approach to process data, build and manage teams, model business processes, and turn research into MVPs. In September, the university will launch four associated educational programs, which will train well-versed professionals with ready-made solutions who won’t have trouble integrating into a larger business or a startup once they graduate, says Alexander Vinogradov, the head of ITMO’s Advanced Engineering School and a senior researcher at the ChemBio Cluster. Starting this academic year, Master’s students will have the chance to try themselves as PEs by joining a contest for product teams.

The team of Alexander Boukhanovsky, a supervisor at ITMO’s AI Research Center “Strong AI in the Industry”, is working on an AI system that can perform the creative activities of designers, tech engineers, and managers. Such systems showed great demand on the market, with over 180,000 users of the already developed platforms, services, and libraries, including FEDOT (an open-source ML framework). By 2025, the team plans to switch to national full-cycle AI platforms and replace foreign AI solutions in the industry by 2027.

ITMO University and Gazprom Neft launched a joint innovative industrial center where more than 150 developers and 275 researchers will produce sensors, robots, drone control systems, computing systems, and other digital solutions for the oil and gas sector. As noted by Vladislav Bougrov, the head of the Institute of Advanced Data Transfer Systems, the center has already put the first six projects, including a functional diagram of an optoelectronic subsystem of the coherent Ising machine and an organochlorine analyzer, into action.

Supported by Russian Railways, the team of ITMO’s National Center for Quantum Internet conducted the first-ever video conferencing call using a quantum-encrypted communication line between Moscow and St. Petersburg. This type of communication allows specialists to transfer high-volume data without potential security threats. The center’s senior researcher Vladimir Egorov and his team are planning to use quantum platforms to cover a wide range of technologies, from highways and wearable devices to drones and satellites, and thus build a quantum internet system first in Russia and then in the world.

ITMO's strategic goal for 2030 is to train world-class specialists for the R&D sector and implement highly innovative projects that will have practical applications and benefit people. According to Daria Kozlova, the university does not step off the current development path but rather brings the marketing focus to a range of projects.

Thus, people may soon forget about wired charging thanks to the development proposed by Alena Shchelokova, a researcher at the Faculty of Physics, and her colleagues from the project Indoor Wireless Charging. With a safe and wireless power transfer (WPT) room, users will be able to charge their VR headsets, beauty gadgets, and other electronic devices anywhere: in a room, a car, an airport, or a train station. The team expects to present a full-fledged commercial product in 2023.

Other soon-to-be-launched projects are created by Elena Koshel, an associate professor at the ChemBio Cluster and the head of the project Development of a full-cycle platform for point-of-care diagnostics based on DNA nanosensors, and her team who developed an affordable and compact device for diagnosing brain inflammation (currently undergoing registration as a medical device) and are working on testing systems for STDs and pneumonia.

Aleksey Sergushichev, the head of ITMO’s Laboratory of Genomic Diversity and the frontier laboratory Computational Methods for Systems Biology, stands by one of ITMO’s core values, namely openness, when promoting his products. As a result, more than 15,000 researchers have already used his GATOM service to analyze biological processes at the cellular level.

The new ITMO is proud to be a high-tech system with its own interface, apps, and functions. Yet the heart of the university has always been and will always be people. That’s why the university does its best to create an inspiring environment for its students and staff and attract new talents. For five years now, ITMO University has been running the ITMO.STARS contest for talented applicants and welcomed a record number of competition winners in St. Petersburg this year.

Apart from that, ITMO also provides a number of research opportunities for scientists. The ITMO Fellowship and Professorship program has been successfully running at the university for eight years now and starting this year, the program welcomes not only individual researchers but also scientific groups and development teams within the PI + Team track. These programs are meant to create a PI community at ITMO, says Alexey Slobozhanyuk, the head of the Scientific Breakthrough project. The mission of the platform is to help researchers grow their professional network, find like-minded people, and launch international projects.

“We want to be a corporation made by people and for people. Let’s leave set work schedules, task trackers, and a strict uniform and take what is really ours: a high problem-solving speed, the entrepreneurial spark, an ability to attract new projects and work with different audiences, and flexibility! We’re about to create a new reality or shake up the existing one,” notes Daria Kozlova.