This year Tinkoff company launched the first scholarship program for promising students of Russian universities. Out of 14,000 applicants, only 80 became winners. Among them are two ITMO students – Konstantin Baltsat and Gleb Demin from the Faculty of Infocommunication Technologies. We talked to them and found out what helped them succeed. 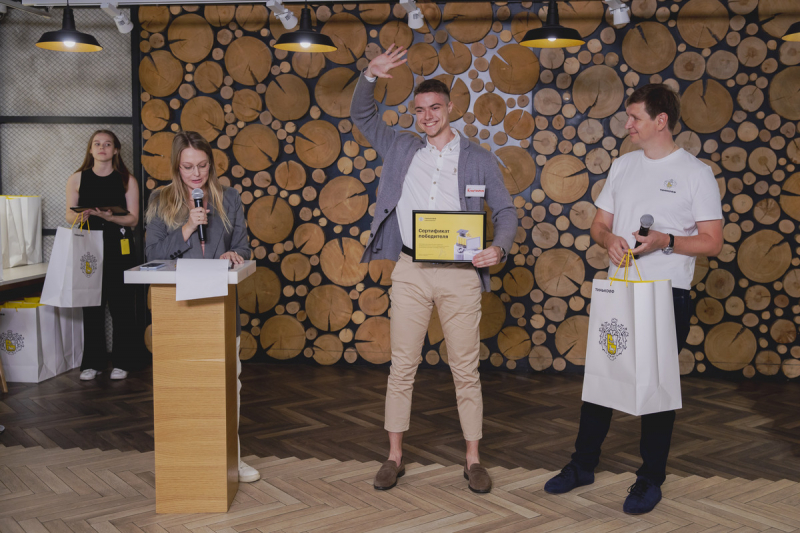 The scholarship program for promising students of Russian technological universities was launched by Tinkoff in April 2022 and will become an annual event. The competition is open for Bachelor’s, Specialist, and Master’s students (except for those in their last year of studies) over the age of 18. According to the company, the expert board that evaluates the applications consists of top managers of Tinkoff, famous entrepreneurs, and representatives of scientific, educational, and social organizations. The total budget of the program in the academic year 2022/23 is 20 million rubles (~$329,000).

Academic – for those who excel at studies and participate in national and international competitions;

Industrial – for those who showed great results at programming hackathons and championships.

Around 14,000 students from over a 100 universities and 27 cities applied and 80 became winners. They gained the highest scores during the tests and interviews with Tinkoff experts and will receive 25,000 rubles (~$400) per month for one academic year. Moreover, they will have access to the Tinkoff Education platform and its courses in mobile, web, and backend development, as well as data science, product management, and so on.

Gleb Demin, a second-year student at the Faculty of Infocommunication Technologies and one of the winners of the industrial track, emphasizes that access to educational resources is the best award for him. Now he participates in the School of Mobile Development by Yandex Academy and hopes to start an internship there.

“Receiving a scholarship is great, but I’m also really excited about the access to courses and study materials. Personally, I’m interested in Android development. I’ve heard reviews of my friends who took courses by Tinkoff and they were positive – the curricula and mentor support is great,” says Gleb.

Another winner of the Industrial track, a third-year student at the Faculty of Infocommunication Technologies Konstantin Baltsat, also notes that communication with the mentor and the community is very important to him. As of now he is participating in an Innovation Workshop at Skolkovo, where he studies as part of a joint program by ITMO and Skoltech. He’s developing a technology-driven startup based on machine learning and neurotechnologies:

“The scholarship gives you financial independence and the opportunity to freely study and do science but it also makes it possible to join the community of talented students from all over the country. The support of mentors is also great, as it’s often missing. I’d like an expert to consult me on do’s and don’ts,” says Konstantin.

Previously, both students have taken part in other educational events by Tinkoff. For example, Gleb Demin made it through the selection process for Tinkoff Generation and studied C++ algorithms for three years tuition-free. Konstantin Baltsat, as a student of the Kapitza Phystech Lyceum of Natural Sciences and Mathematics, participated in a joint program by the lyceum and Tinkoff that helps school students prepare for math and programming competitions, as well as completed a free course on the neurobiology of learning.

Both students are experienced participants of hackathons, competitions, and contests. That’s one of the main criteria that helped them get selected for the scholarship. Gleb Demin has been participating in programming competitions since the eighth grade – most of them were held by the Kruzhok movement. Meanwhile, Konstantin entered ITMO because of the SberCode hackathon: as part of a team, he developed a method for automated login into Sber ID using a fingerprint and received a special award for that. One of the team members who studied at ITMO suggested that he also apply here and move from Moscow to St. Petersburg.

In order to make it to the finals, the participants had to list all of their achievements (wins at competitions, hackathons, contests, and participation in intense courses) and write a letter of motivation on why they deserve the scholarship.

Then they had to undergo a one-hour-long interview with an HR specialist from Tinkoff. The questions were related to personal priorities, strategies of choice, and behavior in stressful situations. It was followed by an exam in either math or computer science.

According to Konstantin Baltsat, courses taken at ITMO helped him during the interview:

“Soft skills at ITMO made it possible to practice public speaking and team management, which is always useful and helps at the conferences and scientific schools I participate in. They also introduced me to the social exchange theory. I’ve read a lot about it and I’d say Captivate: The Science of Succeeding with People by Vanessa Van Edwards and Influence: Science and Practice by Robert B. Cialdini were really helpful,” says Konstantin.

During the second stage, the semifinalists were supposed to either demonstrate their programming skills and write a one-dimensional dynamics algorithm in real time, or solve complex math tasks during a limited time.

According to Gleb and Konstantin, the tasks weren’t that hard but some of them were peculiar:

“I keep in mind the task on weighing sand in three steps. Now I use it during other courses, for example, I proposed it to my colleagues in neural morphic research at Sirius. It leaves everyone thinking about it for several days but once they know the solution, everyone’s shocked how simple it is. I didn’t solve it straight away either, but figured out what my first steps should be,” says Konstantin.