ST. PETERSBURG, Russia (May 21, 2015) - Programmers of ITMO University, St. Petersburg, Russia, for the sixth time became the winners of the 2015 ACM – ICPC International Collegiate Programming Contest World Finals. With this victory, the University beat its own record of the highest number of wins in the history of the competition. 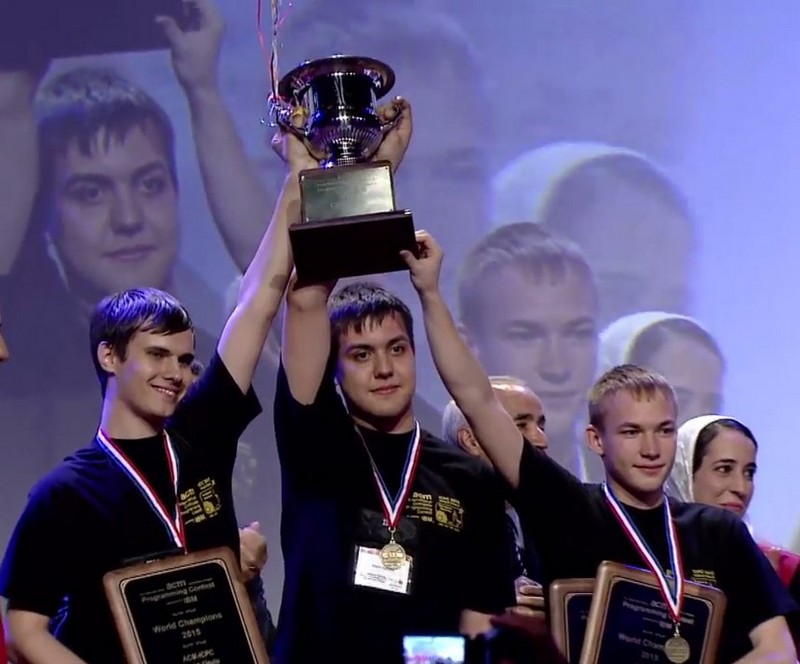 Some 128 teams from around the world, including 10 from Russia, participated in the Finals. St. Petersburg was represented by the “champion team” of ITMO University, which included Artem Vasilyev and Boris Minaev – bronze medalists of the last year’s championship, as well as Gennadii Korotkevich, world champion of 2013 as part of the ITMO University team and the first in history winner of all prestigious programming competitions, including Google Code Jam, Facebook Hacker Cup, Яндекс.Алгоритм, Russian Code Cup and Topcoder Open.

The participants had to solve 13 programs in five hours. The ITMO team solved all problems, setting another record in the history of the championship – up until now, not a single team had managed to solve every problem offered by the organizers.

ITMO University also set its own unique record – different student teams won six championships out of the past 39. No other participating college or university has managed to accomplish that. In the past, ITMO University became ACM – ICPC absolute champion in 2004, 2008, 2009, 2012, and 2013.

“Deep basic mathematics and algorithm knowledge, augmented by hard work, determination and discipline, that is the “recipe” for our guys’ victory,” said Lydia Perovskaya, ITMO University Computer Technologies Department tutor. “But then again, every winning team has its own journey to victory.”

International Collegiate Programming Contest is the largest student team competition in programming that was originally held among colleges and universities in the U.S. and Canada. Other countries joined in 1990. Russian programmers debuted in 1993 and since then, Russian students have not only regularly participated in the ACM ICPC Finals but also became its winners. To enter the Finals, teams need to get high scores throughout the multitier competition that brings together over 13,000 teams from over 3,000 colleges and universities from 90 countries.

ITMO University (St. Petersburg) is a National Research University, one of the leading universities in Russia in IT and Photonics. It’s also the alma mater of the winners of ACM ICP, Google Code Jam, Facebook Hacker Cup, Yandex Algorithm, Russian Code Cup, TopCoder Open and others. Priority directions include IT, Photonics, Urban Studies, Art & Science, Translational Medicine, Social Entrepreneurship, Science Communication. Since 2013, it’s a participant of the 5-100 Project.