Internships of the DIT4BEARs project aimed at the development of information technologies for the Barents Euro-Arctic region took place in early 2021. They were conducted with support from ITMO Technopark that helps organize various events. Among the participants were two teams from ITMO University that won the project’s hackathon. In the course of their work with colleagues from Sweden and Finland, they helped solve real challenges that stand before the development of the countries of Northern Europe. 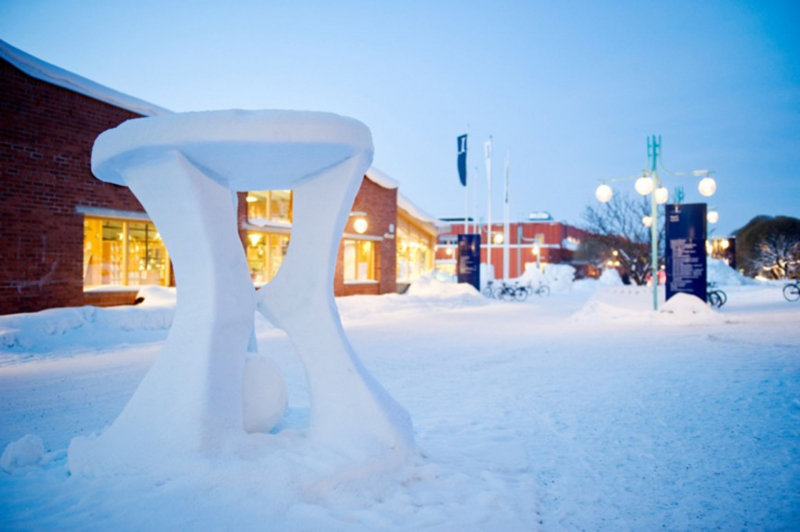 Specific difficulties are associated with living in the North: rapid weather change, low population, migrations of wild animals that block the roads. These challenges are common for all northerners, regardless of where they live: in Russia, Scandinavia, or North America. Some of them can be solved with the help of information technologies.

This is the goal of the DIT4BEARs project that brought together universities of Russia, Norway, Sweden, and Finland. It was launched last year and is designed to end in 2023. ITMO University has become one of the project’s partners.

“In 2020, we organized a series of events, including seminars and hackathons,” comments Olga Timokhina, the project’s coordinator from the side of ITMO University. “Following the results of the project, we selected two teams that took online internships at the Luleå University of Technology (Sweden) and the Lapland University of Applied Sciences (Finland). Among the hackathon’s participants were teams from China and Finland, but it was two ITMO teams that won. Their lineup was quite diverse: among the members were developers, marketing specialists, and so on. We are grateful to ITMO Technopark, who acted as the events’ co-organizer, for its support.”

Every team had its curator who communicated with the students and gave them recommendations on their projects, as well as how to present them.

The Lapland University of Applied Sciences proposed the hackathon’s participants to work on their ConnectedDeer project that has to do with the use of IoT (Internet of Things) technologies in reindeer herding, with a focus on road safety. The participants had to come up with an idea of a navigator app that would make it possible for drivers to see where deer are thanks to GPS trackers fixed to the animals as part of a special project on reducing the risks of traffic accidents.

It was a team of second-year students from ITMO’s Faculty of Technological Management and Innovations who won the hackathon in this category. “The volume of research that we did is colossal: on the whole, we worked for about 30 hours. By the night of the first day, we knew everything about tracking and GPS systems, learned to identify various species of deer by their fur type, knew how many McDonald’s there are in Finland and studied the specifics of the operation of Swedish railroads,” remembers Olga Kokorina, the team leader.

After winning the hackathon, the students participated in a three-week internship during which they continued working on their project. “We needed to conduct some deep research on economics, marketing and the associated technological and legal aspects in order to reshape our project and get a better idea of its further development,” says Danil Serkov, another team member.

“Our main problem had to with the lack of understanding of the local specifics by our European colleagues; for one, we even had to do a separate research on the specifics of reindeer herding in Russia in order to substantiate why organizing wide-scale tracking on the territory of Russia can be problematic,” adds Polina Guseva, also a member of the team.

According to Polina Kiseleva who also participated in the internship, in addition to economic and technological plans for the development of the project, the students also proposed a concert for organizing an international seminar with participation of reindeer herding organizations from various countries.

“We got interesting information about the scenarios of using our app in Russia,” comments Mika Saloheimo, the team’s curator from the side of the Lapland University of Applied Sciences. “It would’ve been difficult to get such data any other way. The teams proposed interesting ideas and plans for the project’s further development. Also, as the curator of the interns, I want to mark out their innovative thinking that played an important role in their work.”

Another team that won in the hackathon was to work with specialists from the Luleå University of Technology. “Our task was the following: to develop a website with the option to hold conferences (i.e. something similar to Zoom), face verification, and a filing system  based on the blockchain technology,” says Aleksander Ssorin, the team leader.

“This was our first web application, we had zero knowledge in this field, so we started with diligently studying the associated theory. In about a week, we had the body of a website with face verification, and in two weeks, we had everything ready save for blockchain. For our efforts – we did a lot even though we didn’t make the project in time – our mentors got us five more days,” remembers Vitaliy Dikovitskiy, another member of the team.

According to Alena Zaharenko, also a team member, the internship ended with one more hackathon, right after which they were to defend their project. “As a result, we greatly developed our skills in web development as well as teamwork, and were very happy with this experience!” adds team member Vladislav Larin.

“The online internship organized by DIT4BEARs is very important and relevant,” comments Raihan Ul Islam, a curator from the side of the Luleå University of Technology. “This gave students the opportunity to work with experts from different countries in the time of the pandemic. As part of this initiative, a group of students developed web applications for videoconferencing based on WebRTC. Face verification was used instead of passwords for user authorization, and the blockchain technology was used for storing the records of authorized users. The students were very motivated; as for me, the online internship was a huge experience. I hope this collaboration will go on.”

After the borders are opened

The DIT4BEARs project doesn’t end with this. This spring, a new hackathon is scheduled to take place at University of Tromso (the Arctic University of Norway); you can register for it here. Following its results, the winners will be offered internships.

Also, as soon as an opportunity presents itself, the ITMO students who took internships online will be invited to visit the Luleå University of Technology and the Lapland University of Applied Sciences in person.

“When the borders will be open and there will be an opportunity to travel, we plan to involve these students in our DIT4BEARs project to work on a case,” adds Olga Timokhina. “We think that they will travel to the universities they took online internships with, and take a look at the operation of the research centers they remotely worked with.”