For ten years, Nanograd, a summer school for school students from all over Russia, has been running various workshops with real-world cases from companies. This year, the school took place in St. Petersburg, and its participants could join a workshop by ITMO’s Center for Science Communication, as well as special lectures and lab tours. Read on for the school’s highlights. 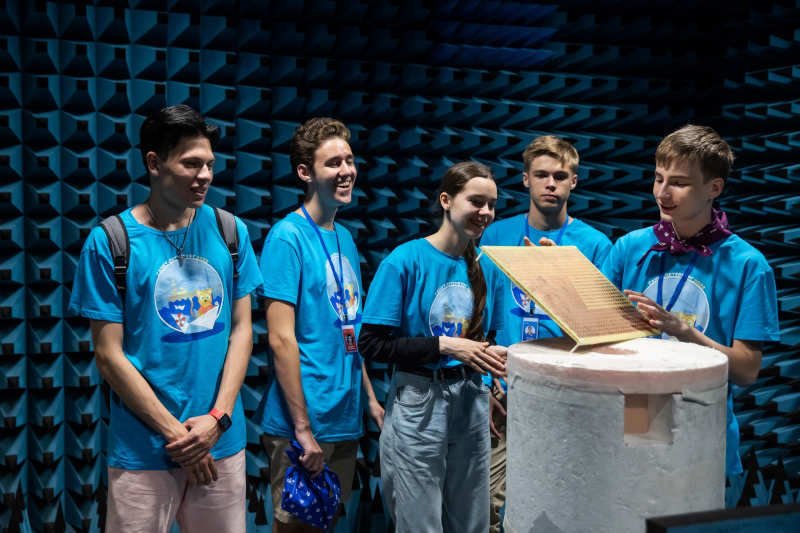 At Nanograd, school students aged 7-18 years from different Russian regions get to spend ten days as citizens of a science campus. Through participating in cultural events, trying their hand at different professions, and communicating with business and science experts, students learn to conduct their own research and high-tech projects in physics, chemistry, biology, and nanotechnologies.

Over the ten years of its existence, the school created by the Fund for Infrastructure and Educational Programs (Rusnano) was held in Kazan, Moscow, Penza, and other Russian cities. This year, for its anniversary, the project came to St. Petersburg.

In 2022, ITMO’s Center for Science Communication joined Nanograd for the first time. As shared by Marina Radchenko, one of the center’s analysts, Nanograd offers an interesting teaching format and the center’s researchers were curious to explore it from the inside. It became possible thanks to a recommendation from Grigory Tarasevich, the founder and head editor of the popular science magazine Kot Shryodingera (Schrödinger’s Cat).

At the university, the school’s participants were treated to an eventful program. For instance, they took a tour of the university’s many labs and peeked inside the anechoic chamber used for testing antennas. Ekaterina Skorb, the head of ITMO’s Infochemistry Scientific Center, introduced the students to the field of infochemistry and encouraged them to explore careers in academia. Later, at the STAGE exhibition, the participants had the chance to look at contemporary problems through art objects and installations created by graduates of ITMO’s Art & Science Master’s program.

After the university tour, Nikolay Pshenichnyi, head of ITMO’s Scouting and Career Guidance Office, shared his tips for applying to university. For instance, students who don’t have high USE scores but can boast unique achievements (research, startups, or wins at contests) can apply via the ITMO.Stars initiative. Current students and the first graduates who enrolled via the initiative also shared their experiences of studying at ITMO.

Nanograd also featured 14 workshops on such topics as urban farming, nutrition science, 3D modeling and prototyping, graphic design, public speaking, and more. Experts from ITMO’s Center for Science Communication hosted a series of classes on science communication and science art, discussing how researchers or organizations can share their research with a wider audience.

One solution is to teach researchers to turn complex and lengthy publications into short posts for social media or interesting public talks. At another class, the students learned to choose topics and characters to write compelling stories. They also practiced solving cases and establishing new communication formats using non-standard approaches.

All the insights gained at workshops could be immediately applied to solving cases suggested by seven companies, including SberEducation, Gazprom Transgaz Yugorsk, KRIST, and others. The students had to come up with solutions in teams and then present their ideas to a board of experts.

Applying to ITMO after Nanograd

This year, the summer school welcomed 148 students in total. Among them was a St. Petersburg local, Viktoria Benner. Earlier, Viktoria took part in another summer school, where her hard work, curiosity, and social skills were noticed by ITMO’s Galina Grenning from the Institute of International Development and Partnership. It was from her that Viktoria learned about Nanograd, and she is grateful for this valuable experience.

“At Nanograd, I got to work with KRIST Group that develops nutritional additives. Everyone on my team was so eager to work that I, too, couldn’t stop even at home. We were working on a project plan for a sodium alginate production plant in Ruza city. In the plan, we described every production stage, listed all the necessary equipment and its cost, as well as every chemical reaction happening at each stage. We also got to evaluate the Russian market for sodium alginate and calculated the product’s prime cost with some other metrics. All of this allowed me to learn a lot in the field of chemistry. I even got the chance to present our projects at the final defense, answering questions from experts. Our project was named one of the best and our plan could be implemented, even if with certain corrections,” says Viktoria.

At the science communication workshop, Viktoria learned to get people interested in research through social media and science art. Moreover, lectures from guest experts, including cosmonaut Yuri Usachov, advisor to CEO of Fund for Infrastructure and Educational Programs Ivan Bortnik, and RAS professor Artem Oganov gave Viktoria a lot of food for thought.

Viktoria shared that her participation in Nanograd convinced her that she has to get into ITMO.

“The experience I earned at the school is one of the most important ones in my life. I got closer to science and learned a lot from many fields, from the best ways to listen to lectures to the insides of the Large Hadron Collider. All of it inspired me to study and do more! And thanks to the science communication workshop I will now be able to talk about my achievements. I am really grateful to Nanograd and ITMO for helping me see who I want to be and how to get there,” shares Viktoria.