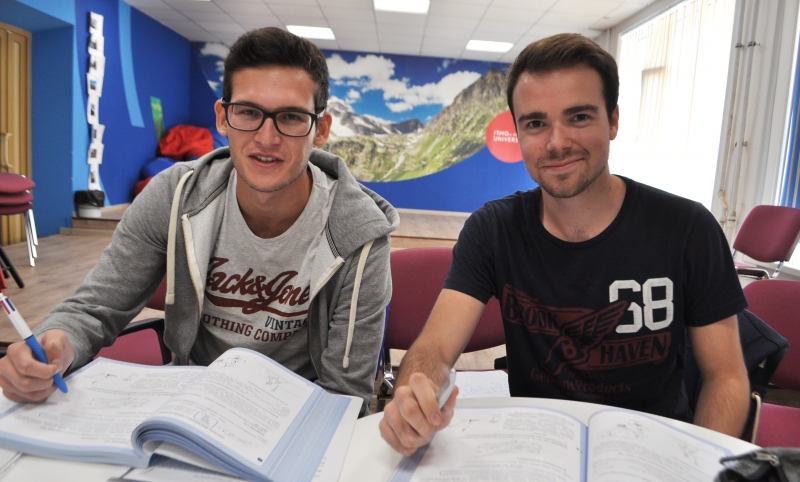 The summer school involves three hours of Russian language study each morning, in groups based on the students’ level followed by an optional cultural program. As the cultural capital of the country, St. Petersburg has much to offer in terms of beautiful architecture, Russian history and interesting visits to the homes of famous Russian writers and poets. If you’re interested in a taste of Russia, here are some first-hand accounts from participants of this year’s summer school. A large number of this year’s students came here from the University of Mons in Belgium. Having just completed their first year of studies at the Faculty of Translation and Interpretation, studying French, English and Russian, they now got the opportunity to experience Russia and polish their skills thanks to the Summer School. The Russian Center at their University told them about the trip, and arranged everything for them. “One of our university staff knows people from ITMO and she asked us if we wanted to go to St. Petersburg, and we discovered it was very affordable. She did all the paperwork and we just had to pay and get our visas.” explained Bastien Fadda.

Almost half of their class has come along for the trip and they’re finding the Russian language course extremely helpful as it differs from their usual program.

“We are learning things that we don’t learn in Belgium; at home our studies focus more on ecology, politics or economics, but here we are learning basic vocabulary that we didn’t know before like fruits, vegetables, colors and animals,” shared Matthias Docobu, another student from Mons. Besides those who have already studied Russian before, there’s also a group of beginners in Russian language study who came to Russia to study and gain new experiences. Boeun Park from South Korea said that she heard about the program while working part-time at the international office at her university. Since she will soon graduate and start working full-time with only a week of vacation per year, she decided to take full advantage of her last free summer and enrolled in the program. “Just before I applied for the summer school,” – shared Boeun, – “I heard about the explosion in the St. Petersburg subway so I was really scared and my parents were worried too, but after thinking about it for some time I decided it would be a great chance to go to an exotic country, and I’m glad I did.”

We asked our international students about their reasons for studying the Russian language and here’s what they said:

Sorenza Wilkin (Belgium): I saw a video of Putin and I fell in love with the language, which really surprised me. Later, I realized that I really like Russian history, I think that Russian people are going to construct the future; it’s an important language for the rest of the world.

Marlène Réné (France): I’m studying Eastern European Politics, and I really want to take part in an internship with the French ambassador in Georgia which requires a high level of Russian. Steffi Caroline (Indonesia): I was exposed to some Russian songs, and I read a book about Ukraine from Svetlana Alexievich, called “Voices from Chernobyl”, but also I adore Putin, he’s very masculine and sticks to what he says rather than just following the majority.

Luca Brusadin (Italy): My mother is from Russia, so for me and for her it’s important that I continue learning this language for the future.

Loïc Tonneau (Belgium): I chose to learn Russian because I like the culture and I find the language very beautiful. I also like to play chess, and that’s a big thing in Russian culture. I know of Karpov and Kasparov who won recent Chess championships.

Ruhi Abbaszadeh (Iran): I am planning to apply for a Master’s course at ITMO in September and I wanted to experience the place first and learn some basics in Russian to help me while I’m living here. Having the opportunity to develop their language skills now through participation in this summer school, the students have been particularly impressed by the level of teaching, although some are finding it easy while for others it’s a challenge. Marlène Réné (France) said that “the teacher speaks only in Russian with us which was difficult at first but it forces you to learn much quicker.” Loïc Tonneau (Belgium) shared “I was expecting the program to be more difficult, but the teachers explain very well, so even if we don’t have a great level of Russian it’s really easy to understand.” Ruhi Abbaszadeh from Iran was also really impressed with the language program, “these are the best language teachers I’ve ever had in my life. Everyone is so kind and patient,” he shared.

Experiencing St. Petersburg and Russia
As with anyone who enters St. Petersburg, including those who come from other parts of Russia, these students were pleasantly surprised and just simply amazed by the beauty of the place. The architecture, the grandiosity, the canals, the history, the parks, are all enough to make you fall in love. Of course there are some other standout features, “the white nights are very impressive, especially at 3am in the morning watching the bridges go up and all the ships going through at the same time, and so many people on the streets” shared Frederique Lambert (Belgium).

“I major in Urban Planning,” shared Boeun Park (South Korea), “So I’m always taking notice of the city and how it’s organized. In Korea there are many skyscrapers and Korean people like to build higher buildings for convenience but in St. Petersburg they prefer fancier buildings, it’s more about style rather than convenience.” The city is also excellent for those who are interested in history and culture and it’s affordable, “There’s so much to visit, the city is huge, and it’s cheap, only 2 euros to enter a museum compared to 10 euros back home, and there are museums everywhere including attics and cellars” explained Bastien Fadda (Belgium)

Often people who come to Russia know little about what to expect or are filled with quite inaccurate expectations and this was definitely the case with some of the participants this year too. “When you speak about Russia in Western countries, people are fearful, they don’t know what to expect, but it’s quite European in St. Petersburg, it’s like a big European city,” shared Bastien Fadda (Belgium).

For some students it was the first trip for such a long time away from home, and they also had concerns, and for others, it was their parents who were worried the most. “My mother was afraid about me coming, but now I call three times a week, and she is glad that I am here, and I feel good in this country, I have no problems here,” shared Sorenza Wilkin (Belgium).

As with any country, there are lots of rumours about Russia, some true, some false, and some just exaggerated. Here are some other interesting observations from our students:

“I had read some things about racism in Russia, and about skinheads, so I was concerned but I’ve never experienced any racism. Some people stare at me though, especially kids, they’re interested. In Korea, we also don’t have a lot of foreign people other than in common tourist spots, so when we see them on the street we also stare,” shared Boeun Park (South Korea).

“I always imagined that in Russia everyone was blond and blue eyed but I was surprised to see that it’s a very diverse country, there are people who look like Latino or Asian but they were born and raised here, they’re totally local,” shared Steffi Caroline (Indonesia).

Ruhi Abbaszadeh from Iran was even so bold as to say “I can confidently say that 90% of what I read in English about Russia is incorrect.” So if you’re thinking about coming to our summer school, don’t think, just come! If you’re already studying Russian it’s a perfect way to get to know the country and the culture, and if not, it’s a great chance to dive in a different culture and expand your horizons. Steffi Caroline (Indonesia) says “We learned a lot of new things, we compared Russian traditions and culture with those of our own countries and exchanged knowledge”.

“If you had told me 2 years ago that I’d go to St. Petersburg I wouldn’t have believed you. But now I want to go to Moscow as well, I want to see all the big cities in Russia, I also want to go to Siberia, just to see how they live, and experience the cold winter.” explained Frederique Lambert (Belgium).