I am a Professional: Gold Medal Winners Share Their Experience

Just recently, the award ceremony of the “I am a Professional” competition took place in Moscow. This year, 3,472 of over 500,000 students became prize winners. Over 100 participants received gold medals, including four ITMO students and one graduate. Apart from cash prizes, the winners got benefits for applying for Master’s and PhD programs as well as an opportunity to do internships at major companies. We spoke to the winners to learn why they participated in the competition, what helped them win, and how they plan to use their prizes. 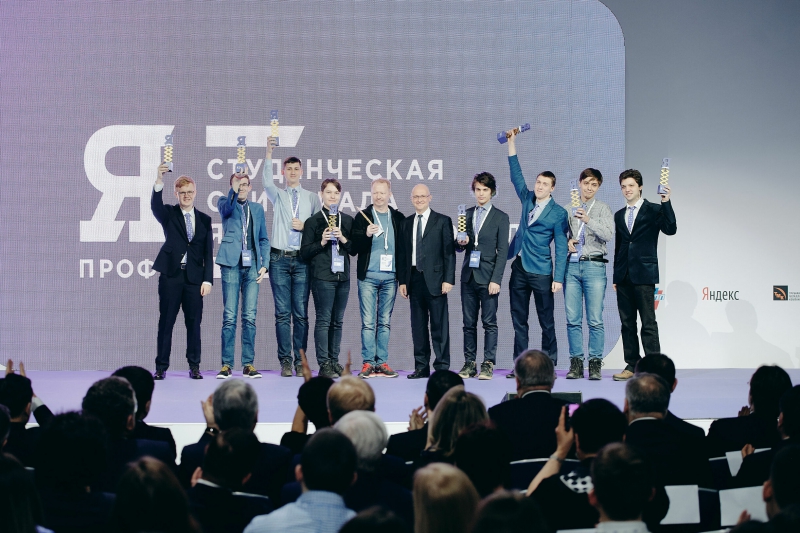 "I am a Professional" award ceremony. Credit: competition's press service

“I am a Professional” took place from November 2018 till March 2019. This year, 523,000 students applied for the competition, which is almost twice the amount that participated last year. 3,472 of them became award winners, among whom 106 received gold medals, 139 got silver and 190 got bronze. Some of the participants got medals in several categories (you can learn more about the competition’s results here).

The award ceremony for gold medal winners took place on April 2 at the World Trade Center Moscow. When opening the ceremony, First Deputy Chief of Staff of the Presidential Administration of Russia Sergey Kiriyenko noted that the leaders of the Russian market have already expressed their interest in attracting these young specialists.

Among the event’s other participants were the Minister of Science and Higher Education Mikhail Kotukov, CEO of the “Russia – the country of opportunities” independent nonprofit organization Alexey Komissarov, head of the “I am a Professional” competition Valeria Kasamara, ITMO’s First Vice Rector Daria Kozlova, as well as rectors of organizing universities and representatives of the competition’s partner companies.

Valeria Kasamara told the ceremony’s guests about the key qualities that distinguish the competition’s successful participants from other students and graduates.

“We conducted some research, and it turned out that you are very different from other young people. You are certain about what you’re going to do in the future, and that is something few can accomplish. You are willing to never stop learning, and believe that your success hinges on your performance and determination,” she said.

Mikhail Kotukov also congratulated the medal winners and noted that students from various cities got the opportunity to prove themselves at the competition.

“In just a year, the competition grew twice in number of participants. I am really glad that representatives of 75 subjects of the Russian Federation became its award winners. In order to obtain best knowledge and recognition, you don’t exactly have to go to Moscow: you can well achieve that in other regions. Our gold medal winners serve as a great example of that,” commented Mikhail Kotukov.

The “I am a Professional” competition is part of the “Russia – the country of opportunities” open platform which focuses on selecting, assessing and supporting projects aimed at promoting the operation of effective and just means of social mobility. This is the first event in modern Russia that has been jointly organized by representatives of business, industry and education: the Russian Union of Industrialists and Entrepreneurs, All-Russian Public Organization “Business Russia”, and ten leading Russian universities.

For the second year in a row, the company Yandex  acts as the event’s technical partner. This means that representatives of industry participated in the development of the competition’s tasks, to ensure they were all as practice-oriented as possible. All in all, over 300 Russian companies took part in organization and conduct of “I am a Professional”. Despite the event being aimed at senior Bachelor’s and Master’s students, anyone willing could participate.

Among the 106 gold medal winners, five represented ITMO University. They spoke to ITMO.NEWS about their experience and plans for the future.

This was my first time participating in this competition; I was motivated by my husband's experience. David Azaryan, Master’s student at ITMO’s Faculty of Control Systems and Robotics, became gold medal winner in the Mechanical Engineering track in the first season of “I am a Professional”.

I didn’t specifically train for the competition. When I came to the on-site round, I took a look at the tasks and understood that I remembered a lot from the basic training I got as a Bachelor’s student at Volgograd State University. I studied botany there, and I had a very good lecturer, but after coming to SCAMT, I decided to change my focus. I got interested in molecular biology, cellular biology, and nanomedicine. The knowledge I got in my Bachelor’s years helped me with many tasks, but it was the experience I obtained at SCAMT that allowed me to solve the last task, a case for which they gave the most points. SCAMT focuses on nanomedicine and nanoparticles, and the task had a lot to do with the former. In the half of a year that I spent at my Master’s program, I got lots of knowledge that I could use at the competition.

I plan to use the chance to do an internship at a major company, like BIOCAD or some other place. It is a great opportunity. As for the money, I plan to use it for education, in particular, I want to further improve my knowledge of English. My program is taught in English, so I need it; also, it will be of great use in regard to my future development. In the future, I want to continue doing research on drugs against severe illnesses. I am interested in studying antibodies that are used in immunotherapy.

I advise everyone to take part in this competition, as this can help you understand which skills and knowledge you need to develop, or make sure that you are really good at what you’re doing.

Daniil Abrashin, graduate of ITMO’s Faculty of Technological Management and Innovations, gold medal winner in the “Advertising and PR” track

I participated in “I am a Professional” for the second time. For me, this was an opportunity to test my knowledge, including knowledge that’s not associated with my professional field (innovation science). As a result, I became a gold medal winner in the “Advertising and PR” track and a runner-up in the “Management” track.

For me, the main shortcoming of the competition was that multiple tracks took place at the same time, so everyone who wanted to test themselves at several fields, for example “Business Informatics” and “Finances and Credit”, had to choose only one of them. I hope that the organizers will account for that in the future.

What was great was that the tasks for the competition were developed by not just lecturers but also practitioners from associated fields. The ability to combine theory and practice, apply mathematical analysis and statistics is often quite relevant. I’ve never had any professional experience in advertising and marketing, all I ever did was solve several cases as part of ITMO’s Marketorium international project. In 2017, I worked on developing an advertising company for the “Geometry” housing estate by the Investtorg company. In 2018, I participated in the development of a brand character for integration into media channels and the Ready for Sky mobile app of the REDMOND company.

I plan to make use of the opportunities I won: I want to do an internship at Rosatom and join a PhD program at ITMO University. The cash prize will go to developing a project that I work on in collaboration with the Foundation for Assistance to Small Innovative Enterprises. It focuses on designing cooling systems that are based on low-temperature Peltier elements for using computers’ exhaust heat, which is, in essence, a continuation of my work for the UMNIK program.

My choice to participate in the “Advertising and PR” track was not a random one: in the course of my work, I often saw how promising innovative projects failed as they weren’t presented to investors and the public in a proper way. I plan to study the issues of marketing and innovations more seriously, and I expect to get support from ITMO University in this matter.

For a long time already, I’ve been working as a programmer for the Wärtsilä Digital Technologies company, we develop algorithms for plotting courses at sea. Last year, I took part in the competition and got a silver medal. It was slightly disappointing, so I set myself a goal: to win a gold medal this year. Still, I didn’t train for the competition.

At the competition’s final round, there was an interesting situation. Three final tasks were tasks in programming, and they were checked automatically by special tests developed in advance by the jury. The statement for the last problem was defined incorrectly, and it wasn’t clear what the answer should be like. The mathematically correct answer was infinity, but there was no such answer in the output format. So, I had to try different numbers in order to learn which of them the jury’s program deemed a “true” infinity. Eventually, I guessed that it was 0. After the competition ended, these tests were cancelled, and everyone's’ solutions were tested once again. Still, I believe that the fact that one couldn’t hand in a correct answer during the competition had an effect on the results.

This year, I participated in the competition for the second time. Last year, I got a silver medal in the the “Programming and Information Technologies” track; this time, I got gold, and also a silver medal in the “Artificial Intelligence” track. I didn’t take any special training to achieve that: I just solved all of the sample tasks.

At the time that the competition took place, I also participated in a winter school on artificial intelligence at the Moscow Institute of Physics and Technology, where I also took the on-site round of the namesake track of “I am a Professional”. At the school, we focused on forecasting the insurance products that a bank client will purchase in the future, based on their transactions and activities associated with purchasing insurance products. By the way, our team became the winner of the winter school, as well.

Last year, I did an internship at the VTB bank, but I won’t be doing any internships this year, as I found myself a job. Still, I’m considering joining a Master’s program at ITMO University.