Between August 30 and September 3, ITMO University held the on-site version of ITMO_ENTER, a series of events for first year Bachelor’s and Master’s students with thematic stations where they could learn about the university and meet their fellow students and lecturers. 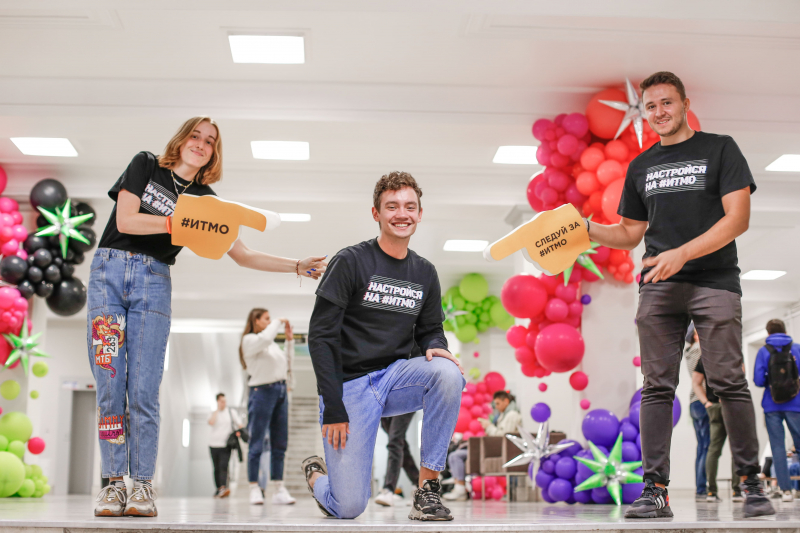 ITMO_ENTER is a week when students get to dive into ITMO’s culture and atmosphere and learn all about the opportunities available at the university.

On August 30, first-years received their student IDs and met the deans of their university faculties, as well as their adapters, who will guide each student group and help them with any issues in their first six months at ITMO.

Then, on August 31, students got to watch a live broadcast of a special ITMO’s Academic Council meeting held at Sevkabel Port in the form of a journey into the future: from 2021 to 2030.

“This year’s students enter the university together with the launch of the Priority 2030 program. This means they will be able to witness the university’s development and contribute to it. Students got really involved in thinking about what they personally can do for the university within the outlined strategic projects. Sometimes it’s hard for them to believe that they can take part in projects of such a scale. Those who grew interested filled in our feedback forms and left their email addresses – they are hoping to get involved in our projects and initiatives. So we definitely need to organize such events and do it regularly!” commented Maria Didkovskaia, head of the university’s Internationalization Department.

Moreover, between August 31 and September 3 ITMO’s new students got to attend eight stations: #itmo_native, #itmo_edu, #itmo_science, #itmostudents, #kronbars, #itmo_global, #itmo_accelerate, and #itmo_advice. Each station was meant to help students get to know the university’s infrastructure and educational services, as well as give first-years the chance to meet each other and talk to lecturers in an informal setting.

“I learned about ITMO in eighth grade and I knew then that it was cool. My sister who studied here also recommended me to enter the university. It’s awesome… Everyone is so kind and ready to help! I like that ITMO treats each student with respect and values individuality. I’ve been to all stations but one so far and it was great! We had a whole week of getting to know the university in an interactive format – with workshops or games at every station,” says Katerina Khripunova, a first-year student at the Bioengineering Bachelor’s program.

The events took place at ITMO’s buildings on Kronverksky Prospect and Lomonosova Street and students could create their own schedules for visiting the stations – the main requirement was to cover all eight of them.

“Before applying to university, I compared many institutions and programs and decided on ITMO. I entered the Bioengineering program without entrance exams because I won a contest. Today I managed to get to four stations – I already have some fellow students here, but it would’ve been harder if I was alone. In general, I expect a lot from my studies. So far, I like everything, we’ll see what happens next,” shares Ekaterina Abzhandadze, a first-year student of the Bioengineering Bachelor’s program.

At the #itmo_native and #itmo_edu stations, first-years learned the ITMO Student Code and rules to abide by on campus, got to know the structure of the educational process, and the procedure for transferring from one program to another.

At #itmostudents and #itmo_advice, the fledgling students learned about volunteering opportunities, student clubs, events and grants, the Student Services Office, and other opportunities.

This year, first-years also talked about alumni, since they will already be alumni in a few years and already have the chance to interact with current alumni. At those stations, students discuss how they’d like to interact with alumni, be it through mentorship, internships, or experience exchange, and also offered their own ideas.

“I love physics and I entered ITMO knowingly, because I didn’t want to leave St. Petersburg and I don’t know any other universities with this level of training. So far, I like everything, my groupmates are very nice – I’ve already met them all,” says Polina Steshenko, first-year student at the Faculty of Photonics and Optoinformatics.

First-years also learned about the key principles of time management and were equipped with useful pieces of advice on maintaining a work-life balance and refilling their emotional resources.

“We talk to students about time management and get into the way our brains work – we explain that we should take care of it so that we stay productive and happy. We also offer recommendations on how to practice self-care, how to get better sleep, and how to plan quality resting time,” says Yulia Romanenko, a soft skills lecturer at ITMO.

Apart from that, students got to work on specific cases – for instance, identified the problems that might arise in the course of their studies and tried to come up with solutions.

At #itmo_global, students learned about the academic mobility and double degree programs available at ITMO, while at #itmo_science they heard about opportunities for building a career in science.

Moreover, there was a whole block on career opportunities and project activities that students can take part in during their time at university.

“We tell students about the ways they can grow as researchers at ITMO. They learn about the projects they can take part in and the ways they can earn money at the university, without the need to look for another job. Our PhD students and staff of scientific labs share their experiences and talk about the scholarships, contests, and grants available, as well as entrepreneurship, internships, and the Congress of Young Scientists,” explains Marina Kazantseva, a soft skills lecturer at ITMO.

Then, first-years had to apply what they’d learned in practice and create an image of the perfect graduate who was able to build a scientific career – they had to envision what such students feel and what they do as they graduate from the university.

Career and research: you can do both

Experts at ITMO’s Career Services Center are certain that students have to think about their career already at the start of their Bachelor’s studies.

“Students should start looking for a job not after getting their diplomas, but right when they enter university. We present all the opportunities available at ITMO: where to find an internship and where to get practical training. We also talk about the opportunities open at our Career Center and what awaits students in the future – practical training, career events and consultations. We ensure students that they shouldn’t be scared, and even if they aren’t on the lookout for a job now, they can at least choose the field they want to develop in. Our career paths can change – we can settle on research or business or go freelance. All of those things can be combined at ITMO: students can already combine a job at the university and that at a company. Or they can create a project and take part in the Accelerator,” says Katerina Bashkatova, a staff member of ITMO’s Career Services Center.

According to Maksim Makarov, a mentor at ITMO Accelerator, students can bring their ideas and get help with their implementation at the Accelerator.

“Here, students can test their projects, they can bring their ideas, technologies, or prototypes and see how they could do on the market,” says Maksim Makarov.

Marina Prokofieva, a manager at ITMO Accelerator, adds that taking part in the Accelerator is a great networking opportunity for young researchers.

“Those who don’t know anything about startups but would like to learn can come to us and see how it all works from the inside. There is also the chance to join an already existing team – there is a constant exchange of experience and ideas. We support projects at any stage, so we are happy to welcome everyone,” she says.

Representatives of LIIS Engineering Solutions, a company of Vadim Zayats, an ITMO University graduate, also took part in ITMO_Enter. They spoke about career opportunities and also held an ideas contest – the company has promised to support the most interesting one.