Is it all right to cut some slack to a student who doesn't know the Maxwell's equation, but can construct a motor commutator? What is the right way to assess practical skills and knowledge? During the VIII Gaidar forum, Russian and foreign experts, rectors, politicians, economists and representatives of business have revised the higher education's paradigm and separated the "innovator" and "inventor" concepts. ITMO's Rector Vladimir Vasilyev and Nina Yanikina, Head of the Project Management and Innovation Department, represented ITMO University at the event. 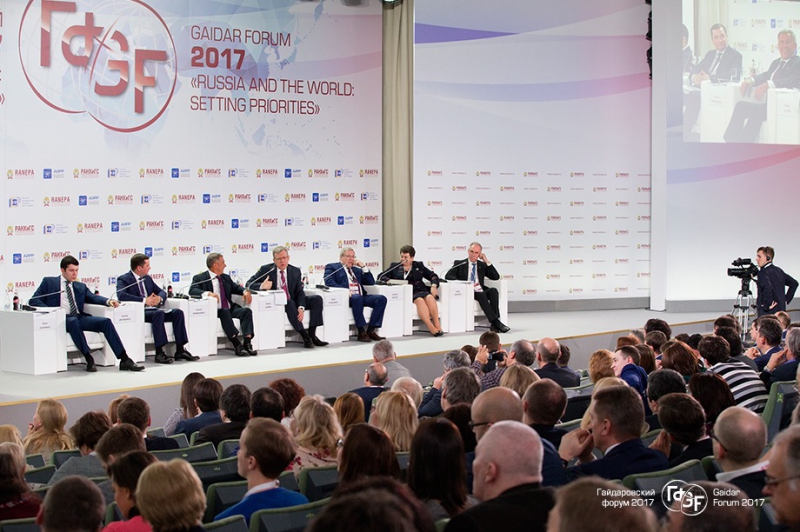 As of now, when a potential student enrolls to a university, it is his knowledge, not the skills that is assessed. Vladimir Vasilyev noted that every university aims to get talented students. So, if they want to focus on entrepreneurship and inventions, they are to make use of schools that promote further education — andit is best if they engage potential employers in the process, as well.

"One has to understand that there is no point in creating technologies for the sake of technologies or making products for the sake of products — a clear understanding of why anything is done is what's really important. We have to elaborate a system comprised of three "players": further education establishments, universities and innovative enterprises. Elaboration of such systems will help eliminate the barriers that exist in modern schools and universities", believes Vladimir Vasilyev. As for entrance exams, ITMO's Rector noted that universities give extra credit for different accomplishments. Yet, this may lead to children getting certificates for the sake of getting certificates, which would be harmful to their creativity. According to ITMO's rector, potential students are to be evaluated based not only on their exam results, but on their completed projects, as well — if the projects are significant and were presented at some public platform.

Ivan Bortnik, Advisor to the CEO of the Innovations Promotion Foundation has defined two different concepts — the concept of "innovator" and the concept of "inventor". "Innovators" are entrepreneurs who can turn any invention into a product. Inventors, on the other hand, are those who will invent even if there is no demand for their work.

"I disagree with the idea that school destroys potential talents. Teaching children to invent is normal for formal education. Yet, trying to turn a researcher into an innovator is useless. I believe that the ability to conduct innovative activities is something we have to identify in a student as early as possible", shares Mr. Bortnik.

Vladimir Mau, Rector of The Russian Presidential Academy of National Economy and Public Administration, defined the tendencies of modern education, including customization and the continuous nature of education, universal language, knowledge and specialists, advanced non-technical program and global competition. As for the relevance of continuous education, according to research by the Higher School of Economics, in Russia, only 10% of people aged 40 and older continue to study. In Germany that would be 40%, in Sweden — 60%. Mr. Mau also believes that entrepreneurship is important for a 3.0 university, but not as its main field of activity; yet, universities are to provide businesses with opportunities for outsourcing.

"We can forecast a new wave of commercialization of higher education, an increase in business projects of all levels: from single educational courses to elaboration of major online platforms and even large educational offline centers", notes YaroslavKuzminov, Rector of the Higher School of Economics.

Oleg Harhordin, Head of the European University, believes that the idea of the 3.0 Universities is quite narrow and does not have to solve global issues like climate change or introduction of biotechnologies. According to him, a university of the future should not be a model startup incubator, but a treasurer of culture. Professions of the future

During the discussion at the "Transforming educational programs for training new personnel (leaders) of the digital world: prospects and challenges" forum, the experts also brought up the topic of the fast change in professions. Konstantin Fokin, President of the national Business Angels' Association, believes that though the government often requests training of specialists with particular competencies, it has no idea which skills will be in demand in several years' time.

"The students have to get rid of the illusion that they will be able to "just work" after graduation — they will have to study for as long as they live. Educational establishments have to experiment, introduce new types of programs, combine online and offline modes and employ different experts", ­shares Mr. Fokin.

In his report, Roman Sorokin, vice-head of the Department for Support of the National Technology Initiative, noted that it's hard to predict which professions will be in demand in some ten years, but we can definitely name the key directions we have to develop. For instance, he named Data Science as one of the most promising directions, as this technology involves a vast number of activities. According to Alexei Gusev, Head of the Development Department of the Russian Venture Company, we are also to expect a wave of "uberization" in what has to do with education. Any country or company that will devise at least a prototype of a global educational marketplace will make a huge breakthrough; yet, such thing is possible only in an unregulated market. Also, the educational system as a whole can't be aimed at training leaders — this has to be the task of its particular section.

"The goal of modern education is to give the fundamentals, and teach the student to learn, to search for new information. This is what "soft skills" is — social skills, the ability to change the one's scope of activity", concludes Nina Yanikina, Head of ITMO's Project Management and Innovation Department.