This past weekend, the Grand Chess Fest, a grandiose chess celebration bringing together professionals and amateurs alike, was held in St. Petersburg. The busy festival program included a high-profile chess tournament which saw ITMO University chess team taking first prize among business teams. ITMO.NEWS met the team members to find out what sparked their interest in chess and why this ancient game still maintains its appeal. 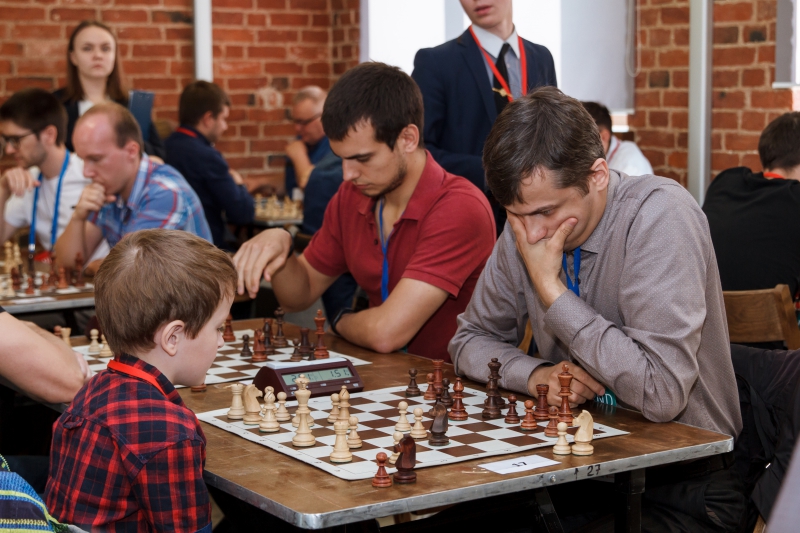 ITMO was represented by four university’s chess team members: Maksim Larin and Murad Huseinov played at the professional level, whilst Bairam Turapov and Ruslan Pescherov competed as amateurs. Thanks to their ace chess skills and expertise, ITMO University team came first in the Grand Chess Tournament’s business-team event. ITMO.NEWS met the bemedalled winners to talk about the noble game and how their chess skills help them in their everyday life.

My main interest is checkers, actually; I’m a professional checkers player and have been in the game since I was five. But I’ve always liked chess, too. My grandfather introduced me to it, and now I play at the amateurs level; I also manage and coach ITMO University chess and checkers student clubs. We regularly organize various contests and tournaments; although most of them are for checkers players, chess rests high on our agenda and there are many blitzes and tournaments for this game as well.

The Grand Chess Tournament is a new addition to the otherwise very well-established Grand Chess Fest. Aimed at promoting chess, it also includes other sports, thus connecting the game to the wider sports culture: for example, there are events for table tennis and different board games like Go. I’ve been to this kind of events before; there was a board games festival in the Czech Republic where participants tried to assemble the Rubik’s Cube using their toes with their eyes closed. Such festivals are not only very interesting, but very useful, too, as they allow you to discover new sports and meet new people. In that sense they are very different from professional tournaments, which are more serious in tone and put the results first, whereas at events like the Grand Chess Tournament it’s all about participation and fun.

Being at the Grand Chess Fest, I was very pleased to see how many young people there were playing checkers and chess. These games develop your brain, helping you unwind at the same time. That explains their wide appeal; I know many people of different professions and walks of life, programmers, for example, who enjoy playing chess in their free time. Playing chess is a very important skill that can come in handy in your daily life. For one, it makes you more maths-savvy, so students with tech majors may find it especially useful. What’s more, chess helps you answer life’s challenges in a more informed and efficient way; it makes you a better planner, boosting your logic, intuition, and strategic thinking, whilst also improving your concentration and quickening your reactions.

Murad Huseinov, first-year Master’s student at the Faculty of Technological Management and Innovations

I started playing board games when I was a child; I began with checkers first as it seemed like a simpler way to start. At the age of seven, though, I switched to chess, and a year after that I started training with a chess coach and playing chess professionally. I participated in many national competitions and won many prizes, including first-place ones. When I started working, playing chess became less of a priority for me and turned into a hobby. However, even when studying at college, I still devoted much time to chess. I started playing chess professionally again after I joined ITMO University. Now my brother Bairam and I play for the ITMO’s chess team and represent the university in competitions. Bairam has been playing chess since he was a kid, too. I told him about ITMO University, and here we are, studying and playing chess for our university together.

For me, this festival is a great opportunity to broaden my horizons. Among the players who came to St. Petersburg to take part in this competition are such world champions as Peter Svidler and Ernesto Inarkiev, the people you can really learn from. I do my best to take part in as many chess championships as possible but it’s not always easy because of my studies. On average, I participate in about three or four major competitions a year, but in the future, I want to dedicate more time to it and join more tournaments. As Wilhelm Steinitz, the first undisputed World Chess Champion (1886-1894), used to say, chess is an excellent exercise for your brain and it’s definitely not for weak people.

Over the years, I noticed that you play as you live. A chessboard has 64 squares, and the way you move your pieces is similar to the way you live your life: you either attack, defend or do nothing. Some people believe that chess is for old people, but it’s completely wrong. Originally, chess was a game played by kings, and only after a while ordinary people were allowed to play it, too. If you start playing chess when you’re young, this skill can come in handy when you grow up. Renowned Russian businessman Sergey Galitskiy has many times talked about how playing chess helps him in his business. Many scientists, doctors, and entrepreneurs played and play chess. There is a book called “They played chess” about all famous chess lovers among whom was the celebrated Russian scientist Dmitri Mendeleev. Nowadays, many young people start playing chess professionally and even win over some older players, as now there are many technologies that allow players to practice regularly.

I have been playing chess since I was five. My father has a chess title and he started teaching me when I was a kid. I play for ITMO University’s select team, but don’t practice with my teammates. Because of my studies I don’t have time for that and only practice online. Of course, I take part in tournaments, but I would really like to do it more often. Playing chess really trains your brain and teaches you to see things from different perspectives. Apart from chess, I enjoy playing tennis and chesspong, a combination of chess and ping pong. It’s a very interesting sport, and it’s loved by senior and younger players alike. Chess is a game for all ages, and it’s not old school at all.