The BIOROBOTY 019 team consists of four students of ITMO’s Master’s program in Art & Science: Alyona Korolyova, Marta Mikhailova, Viktoria Romanova and Svetlana Sidorova. In their work, they combine bioart, robotics, neural networks and artificial intelligence in various unexpected scenarios. Their project Physarum the Fortuneteller, first exhibited at The International Media Art Festival CYFEST-12, was chosen to become part of a major collaborative exhibition to take place in France. ITMO.NEWS talked to Viktoria Romanova, a member of the team, and asked her where the idea to combine bioart with robotics came from and where it has led the artists. 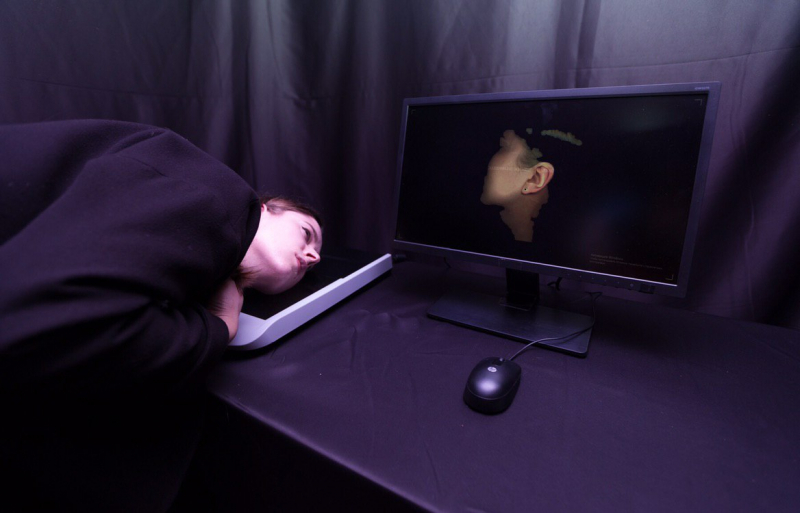 Tell us about your team, how did you all meet and start working together?

We all study Art & Science. There was a moment in our program when we were supposed to work on our projects. All four of us were not really sure what we were doing next, so we decided to join forces and try to create something together.

That’s how we completed our first project, Kitty, which is not very technological or scientific. It’s a collage of pictures of dissident scientists, photos of Soviet computer laboratories, socialist realist paintings, speeches, and bits and pieces of modern political agenda.

After that, we realized that we rather enjoy collaborating, and started thinking of more serious projects.

What is the main concept or narrative that you are working on?

We were greatly influenced by philosophical posthumanism – one of the subjects taught on our program. That’s why in our main projects we tackle anthropocentric ideas about our place in the world, or what we do, how we define ourselves.

Even though these are quite serious topics, we always add irony and humour to our projects. Our tiny motto is idiocy and profanity. We poke fun at ourselves, our public and the whole world.

Tell us more about your projects.

The first one, PHYSARUM//PERFORMER, was inspired by our Master’s program. Natalia Fedorova, a curator, told us about physarums or slime molds. It’s a single-celled organism that can be seen with the naked eye, and is not an animal, a plant or a fungus. As a physarum searches for food, it creates something of a traffic system, solves problems, transfers information and learns, despite the fact that it has no brain. This peculiarity is studied by biologists, and used by mathematicians and programmers.

Physarum can solve basic puzzles, such as escaping a maze. That is why its ability to navigate is used to create various algorithms. In Japan, for instance, it was used to construct the subway system. In other words, it’s quite an impressive creature.

We decided to use physarum in our work by combining it with posthumanism, which resulted in PHYSARUM//PERFORMER. The performance was the following: using light signals, the physarum controls movements of a dancer standing in a circle of light, not unlike a Petri dish. The project argues against the central role of humans in the world, and raises the issue of freedom of choice. We show that humans are not always at the top of the food chain by letting them be temporarily controlled by a single-celled organism.

Our second project is Hungry Hungry Humanity, an interactive installation. We used Hasbro’s Hungry Hippos game as a base and updated it with some light robotics. Normally, the winner is the hippo who managed to eat the greatest amount of balls, but in our version it’s impossible to track, because all the balls fall in the same basin. Thus, there’s no winner, there are only losers in this game, and the only way to win is not to play at all.

It’s an interactive demonstration of the resource cycle in the world. And it can be any resource, anything that we use or consume, or it can even be we ourselves, as a resource for institutions that use us to solve their problems. It’s a reflection on society and the individual.

And the last project is Physarum the Fortuneteller, which we presented on CYFEST last year. We hope it will be part of an exhibition to be held in France. It’s an interactive installation with a physarum at its center, we’ve grown rather fond of it.

In this project, we pondered on how easy we humans seem to believe in the supernatural: in astrology, or fortune telling. This tendency exists even now, at the time of phenomenal scientific advances. It is also the time of pseudoscience, that does its best to mimic the real, evidence-based one, and thus, a layman can start to believe in its cunning tales.

We thought that a physarum, together with the great and mighty AI, can become the modern fortune teller. The installation itself is a program with a physarum “living” inside it. The mold scans the hand of our visitor and transmits the information to the AI, which analyses it and produces a prediction. In all actuality, there is no scanning and no prediction. It’s all a simulation, where the final text is generated by an algorithm.

It’s all really just a speculation, but our visitors were readily scanning their hands 14 times in a row, reasoning that it makes their prediction more precise.

We also had a number of smaller projects we didn’t exhibit. For instance, Object #16 is a collaborative text project based on the exhibition AI and Cultural Dialog – it’s an algorithm generating critical reviews on the exhibits.

No Growth is a collaboration with Ippolit Markelov, a photo project. The pictures were obtained by bioprinting with Escherichia coli bacteria instead of ink. This project tackles the problem of geopolitical locality, the restrictions and challenges that culture has to face. Just like bacteria in the limited space of a Petri dish, any culture has to develop inside artificial borders – political or economic ones. Opening these borders may lead to pathogenic intrusions, which on the one hand, cause a decline in the existing culture, but on the other, become a life-forming hub.

Your projects require quite a broad knowledge set: microbiology, robotics, AI. Do you design all of them yourselves, or do you get assistance? How do you divide the work inside your team?

We do all we can. We are not professionals, so when we need to do something that we cannot do, we come to specialists in the respective field and ask for help. For example, programmers Svyatoslav Ponomaryov and Alexey Zubakov, are the ones behind the program we used in Physarum the Fortuneteller, and Anton Schegolev created the music.

Hungry Hungry Humanity was made at ITMO’s Fablab.

We come up with ideas together. We are very different, so everyone has her own unique ideas that lead to entirely different projects. Sometimes we create a concept to fit into a particular topic of the exhibition, sometimes it is inspired by an event or a book. Hungry Hungry Humanity has, perhaps, the funniest backstory. Sveta Sidorova just happened to find this broken game in the street and brought it to our meeting saying that we had to do something with it, it looked too good. So we developed our project around the game.

How did you get into science and into this Master’s program?

Each of us has her own story. For example, I am an optical engineer, and I got my Bachelor’s degree at ITMO. But at the end of my studies, I understood that I am missing something, so I decided to try something new and enter a completely new field. I started looking for a Master’s program and learned about Art & Science. Even though I didn’t have a clear idea what I was getting into, I sent in my application and got in.

The deeper I dive into the world of art, the more attractive it becomes. I am glad to see that my engineering competences are finding their application in concept art.