ITMO University’s New AIR Art Space: An Object of Unknown Purpose, Miracle Meadow and the Heart of a Goddess

On September 18, an exhibition of projects by the graduates of the first-ever Art & Science educational program in Russia marked the opening of new urban art space at ITMO University. 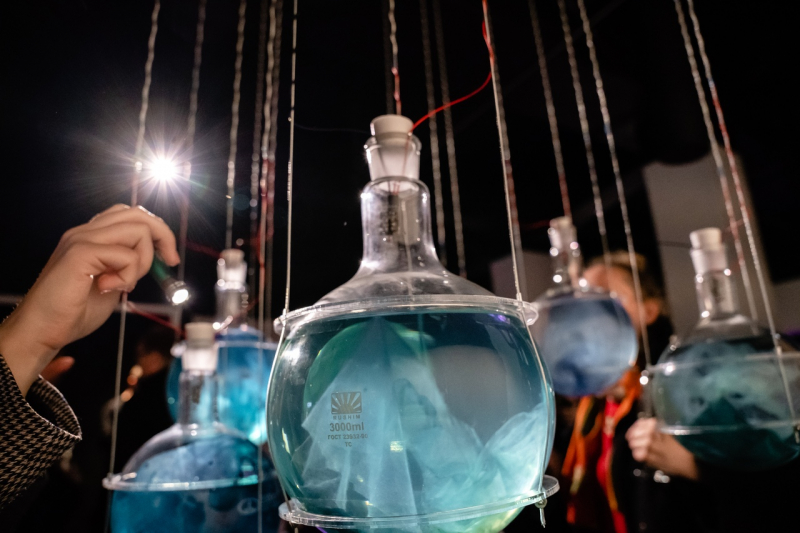 The new art space is designed to not be a mere exhibition hall for the works of artists but also a workshop for science-art collaborations and a communication platform for everyone engaged in and interested in Art & Science in St. Petersburg but also Russia, and the entire world.

Vladimir Vasilyev, the Rector of ITMO University, Daria Kozlova, its First Vice Rector, and Dimitri Ozerkov, head of the Hermitage Museum’s Contemporary Art Department and head of the Art & Science educational program, officially opened the new venue. They stressed the importance of this occasion not only for the university but for the entire city. They also congratulated the first graduates of an Art & Science Master’s program in Russia.

“Now, our university has another unusual place – with creative and intellectual content, with works created by our graduates. When we launched this educational program, we could only dream about its future. But it seems to me that the work undertaken yielded great results. This residency is not just a space for our Master’s and PhD students and young researchers but also, in my opinion, a communication platform for everyone interested in Art & Science. I am confident that the Art.ITMO.Residency (AIR) will gain popularity both in Russia and abroad,” says Vladimir Vasilyev, Rector of ITMO University.

“This is not only a new platform but also a new stage in the development of ITMO University. We are quite confidently entering transdisciplinarity, and it is through transdisciplinarity that we can predict and shape the future. I am sure that this place will become a site for generating new projects and new ideas and will become a space for self-expression,” says Daria Kozlova, First Vice Rector of ITMO University.

As Dimitri Ozerkov explains, AIR – short for Art.ITMO.Residency – was originally conceived as a hybrid, multifunctional space that could serve as a gallery, workshop, coworking space, conference hall, and even a club. But its main purpose is to become a meeting place for science and art and their discussion.

“AIR should become a new spot on the map of St. Petersburg, the most central – geographically – gallery of the city. A gallery which is not just an exhibition space, but also an attraction point for people of different specialties, professions, and goals. Art & Science is a meeting of art and science, translation from one language to another, a place of communication between different people and philosophies. AIR should become an attraction point for a wide variety of people and a platform for fulfilling the task that we have set for ourselves – research, creation, and display of Art & Science.”

The new art space managed to make itself known even before the official opening: from September 9 to 13, the Pangardenia exhibition was held here as part of the legendary international art festival Ars Electronica that covered over 120 cities around the world (ITMO University was the official partner of the festival in St. Petersburg).

On September 18, an exhibition of thesis projects by the first graduates of the Art & Science Master's program was opened in the new space. A part of the event was devoted to the graduation ceremony – the head of the program, Rector, and First Vice Rector personally awarded diplomas to this year’s graduates.

The title of the exhibition – Access Modes – refers to a term used by philosopher Timothy Morton to describe the ways we interact with objects and phenomena. As Artur Konstantinov, the curator of the exhibition, explains, the approach used by scientists and artists to study objects is in many ways similar: in their research, both groups seem to rise above ordinary perception, overcoming the human desire to simplify and “tame” things as much as possible, to make them neutral and invisible:

“Each artist got through to their object by using their own unique set of access modes, creating actual connections between themselves and the object of study. Art, science, and the artist's personal experience form a new object, which also has a relationship with the gallery and the other objects in this space (including the visitors of this exhibition). It is this experience of artistic inclusion (attunement) that opens the most relevant access mode to things today, allowing one to live scientific data and incorporate technology into personal experience, to bridge the gap between people and non-people.”

An ITMO.NEWS journalist took part in an art mediation and found out what the authors themselves say about their projects and what meanings they put into their work.

The object is a black box containing a palm scanner and a screen on which the predictions are displayed. Inside, there is a complex symbiosis of computer intelligence and the “intelligent” slime mold Physarum polycephalum. The shape of the black box by no means chosen randomly – it refers to the philosophy of Bruno Latour. In his opinion, science is a very complex system that is inaccessible to an average person and works in a way hidden from us – but at the same time, it produces a specific result.

The author of the project, Svetlana Sidorova, describes it as an ironic object. It reinterprets the speculative moments specific to artists who tackle complex scientific topics because their research is often rather simplistic and superficial.

“I started working on this project as part of the BIOROBOTY 019 group last year. But 2020 brought up a lot of new issues for humanity. We faced serious challenges, both scientific and humanitarian. But what answers do we need? Are we ready to believe in not-too-positive scientific forecasts or do we need some kind of faith in a bright future? I suggest that we no longer choose between rational knowledge and belief in miracles. This is a unique unit, a result of the joint work of biologists, nature, and programmers. At the heart of this project is Physarum polycephalum – the largest eukaryote that possesses basic intelligence while being unicellular,” explains the artist.

These are five platforms with plants transferred to the exhibition space straight from Gatchina, from the so-called Wonder Meadow (Chudo-Polyana 2.0 – Ed.) – a unique natural area that’s home to relict and endangered plants. The installation also includes postcards with information about each of the plants and a soundtrack recorded directly at the original location.

Artists Alena Koroleva and Marta Mikhailova – also members of BIOROBOTY 019 – note that all the plants were dug up under the supervision of botanical expert Galina Konechnaya. Her husband Ado Haare and she have been exploring the meadow for the past 50 years. The goal of the project is to enable visitors to interact and communicate with plants in an intimate environment and get to know them better.

“Wonder Meadow is a natural formation in Gatchina, where more than 16 species of endangered rare and relict plants grow. They are scattered around the city but people don’t know they are rare species; they pass by them every day and also regularly step on them. We all know what endangered species are, but we do not associate them with something that is literally under our feet. Therefore, we decided that we want to create a space for interaction with endangered plants, but free from the context of nature, shifting the focus of people's attention to the fact that they are here and now and that they can interact with them and read about them,” say the authors of the work.

The project of the artist Victoria Romanova is a found object – a mirror-based optical system of unknown purpose, produced about 50 years ago and kept all this time within the walls of ITMO University. The only clue is the factory sticker “Krasnoyarsk” on its iron frame. Searching for information on the object and its research purpose – the artist is also an optical engineer – resulted in a very personal project about finding a purpose and a place in life.

“My thesis supervisor, Sergei Stafeev, found this device in one of ITMO's rooms. I was hooked not so much because it is beautiful and mysterious, but precisely because of the fate of this thing – the loss of its purpose. While I was studying and trying to solve it, I became emotionally imbued with this object, drew parallels with my inner experiences, the search for myself. Therefore, the project also includes my personal video, partially filmed in self-isolation, as well as a recording of my voice, in which I read out fragments from my thesis devoted to the study of this object,” says Victoria.

The installation by Mexican artist Laura Rodriguez is part of an as-yet-unfinished project on the creation of artificial leather from bacterial cellulose – a material created from kombucha and titanium dioxide nanoparticles. The exhibition features a system of flasks in which bacterial cellulose is grown, photo-sensors that react to the light of a flashlight, and a platform that vibrates slightly under the influence of an electrical signal from the bacteria.

Two people standing on the platform at a safe distance from each other and transmitting signals to each other through a system of flasks and light are able to interact with the installation. According to the author of the work, the project is the result of experiencing the impossibility of any physical contact, which tormented the artist during the period of self-isolation.

“Normally, we do not notice how photons interact with our skin, how it reacts to light – at best, we feel a little warmth. But in reality, there are many particles that interact with our body – and we can use this energy of light to create new ways of communication. One such alternative would be a second skin, made with bacterial cellulose, that vibrates slightly from light hitting it,” she says.

Athena and Reflections on History

Ethan Avila specializes in animation and digital art. At the exhibition, he presented two related projects. The first, Athena, is a projection of an animated bust of the goddess and her mechanical heart, triggered through interaction with the viewer. To “revive” it, you need to make an “offering” to the goddess – follow her Instagram and like her photos. Thus, as the artist says, there is a direct contact between the divine and the human, the real and the virtual.

“We are used to thinking that the gods create people, as, for example, described in the books of the Old Testament. But I tried to invert this idea: to give a person the power that will give life to the goddess. I chose Athena because she is the goddess of arts and sciences. The mechanical heart in this work becomes a link between the tangible and the intangible, a mediator between the divine and the human,” he notes.

He sees his second project as a tribute to all the historical figures and figures of the past who inspired him to pursue art. Specially trained neural networks make “living people” out of statues, converting photographs of stone statues into realistic photographs – sometimes even more believable than professional reconstructions. The list of “animated” statues has been carefully selected by the artist – these are precisely those historical figures who directly inspired the author on his creative path, for example, Dante Alighieri and Fyodor Dostoevsky.