Ancient Art & Science, or What Killed the Medusa

ITMO professor Sergei Stafeev recently delivered a lecture in which he spoke about how Greek philosophers succeeded in discovering many of the laws of optics, how these discoveries were reflected in art, and what’s similar about the story of Medusa and one of the Harry Potter books. ITMO.NEWS put down the main ideas. 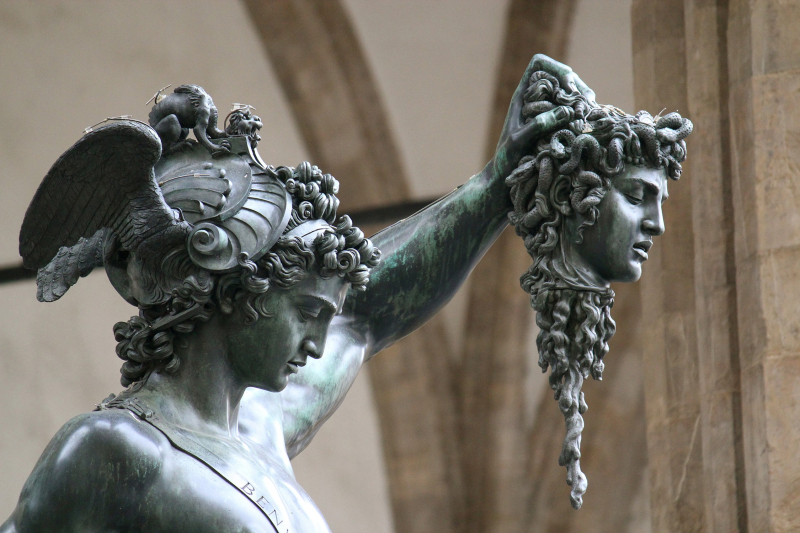 When speaking about the history of optics, physicists recall the names of ancient philosophers such as Archimedes and Euclides. The word “optics” stems from Greek “optikos” and means “the science of visual perception”. Even today, scientists still use the laws discovered by the ancient Greeks more than two thousand years ago.

It’s less often mentioned that the ancient Greeks described the very nature of light and vision quite differently from how it’s done in modern science. The first part of a recent popsci lecture by Sergei Stafeev, a professor at ITMO University and curator of ITMO’s Optical Museum, was dedicated to these differences.

“First of all, they [the ancient Greeks] only had geometrical optics; they had no wave optics and, naturally, no quantum optics,” explains Sergei Stafeev. “But even the geometrical optics of the ancient Greeks was, so to say, inverted. It wasn’t about light that gets into the eyes but about visual rays that come out of the eyes and “feel” objects, then return to the eye and create visual images.”

According to their ideas, these rays formed a cone – not a solid one, but consisting of many individual rays. The ancient Greeks thought this to be the reason why we can’t see small objects from afar.

“Euclides calculated the distance between visual rays as a half of a minute of angle,” adds Sergei Stafeev. “Actually, that almost corresponds with the vision acuity of a human eye, which is defined by not some visual rays but the shape of the lens and the positioning of rods and cones. It’s easy to figure out that, indeed, you can’t see more than is allowed by the structure of the eye unless you use a looking glass.”

The same explanation also provided a curious explanation for longsightedness at old age: at the old age, eyes weaken, and the cones of rays become narrower and intersect at a further point.

Mirror and the Medusa

This way, all ancient Greek optics was “eye-centric”. This means the issues associated with vision, light and color were solved with systems that focused on the eye and its “visual rays.” They also relied on these concepts when studying mirrors.

“The Greeks did not focus on the mirror as an instrument,” comments Sergei Stafeev. “The question was how and why we see ourselves in a mirror: why we see smaller images in a concave mirror, similar images in a flat mirror, and in the convex mirror, the images can even flip. This is what they spoke about, even though they never introduced such terms as a mirror’s focus, optical power, and so on.”

According to ancient scientists, visual rays could change their essence when contacting mirrors or the surface of water. Actually, this is somewhat reflected in the myth of the Medusa Gorgon, who could turn whatever she looked at into stone. Medusa was killed by the greek hero Perseus.

“What did Perseus do? He didn’t look at Medusa directly, but through his mirror-like shield, and saw her there and cut her head off,” explains Sergei Stafeev. “But the point is that Medusa could also look at him through this mirror. In this sense, it seems off that her visual rays (in the existence of which Greeks believed) didn’t kill Perseus. Well, they didn’t because, according to how ancient Greeks perceived this matter, mirrors, glass, and the water’s surface modify the visual rays and they lose their power.”

As many might remember, an echo of this idea can be found in the second Harry Potter book, in which he confronts a basilisk, a creature that also kills the living with its gaze. In the book, those who looked into its eyes through a reflection or a camera lens didn’t die, but becamet petrified.

The ancient Greeks’ idea of visual rays has been reflected in not just myths but also architecture. The idea that people “feel” the space with their visual rays might seem naive from the standpoint of modern physics, but it helped ancient Greeks understand an important thing about the nature of vision. The perceived size of objects and their visual proportions are not identical to their real dimensions and depend on the angle under which we perceive it. Hence the renowned tricks of ancient architects.

“Take the famous entases atop their columns,” says Sergei Stafeev. “No Greek column was a cylinder or a cone. They had the form of a part of a parabola that got larger up to the eye level and then thinned towards the column cap so that the temple would seem taller.”

In the famous Parthenon in Athens, all proportions and distances between the columns, all shapes of the elements were calculated in such a way that an approaching viewer would see the building as ideally proportional despite all the optical illusions that stem from the fact that we see different parts of a building under different angles.

The Greek architects’ keen sense of perspective is proved by more than just modern measurements.

“In 1979, they discovered blueprints of one of the ancient temples in Anatolia. In these blueprints, the building was first drawn with orthogonal structures [the general layout], and then adjustments were made that had to be made to the stones,” says Sergei Stafeev.

The idea of visual rays also had an effect on the architecture of ancient theaters. “The thought was that as visual rays have energy, then the gazes of those who gather at a theater add energy to the performance that takes place on stage. This is why they strived for better visibility,” explains the professor.

It might seem that you can’t exactly call any of the ancient scientists’ ideas “scientific”. So how come their basic geometry laws, perception of perspective, and the fundamentals of linear optics are still relevant?

“In optics, there are principles of reversibility, although they work with light rays, not “visual” rays,” explains Sergei Stafeev. “It means that if you have an object S, a lens, and the image S1 behind it and you reverse the value of time in this equation, i.e. make the light “go backwards”, the system won’t change. Therefore, while mistaking the direction, the ancient Greeks arrived at the right ideas in regard to the law of reflection, systems of mirrors, and the reflective power.”

The professor also thinks that there’s more to what a modern person can learn from the ancient Greeks than just the fundamentals of geometry. These ancient people also gave us one of the first examples of combining art and science in order to create items that artists aspired to imitate over thousands of years, and that are still magnificent.

“Those are examples of the synthesis between science and art, which I believe to be a concept capable of creating masterpieces in both fields. In science, there are such terms as “a beautiful formula”, “an elegant theory” and so on. Same works for art: when we don’t contrapose the rational and the emotional, we achieve the best results,” concludes the professor.