Art historians Olga Kolganova and Anna Spiridonova joined forces with ITMO graduate Sofia Petrash to recreate the monument originally designed by Grigory Guidoni. Read on to learn more about the process behind the project – from the initial idea to its presentation at a conference. 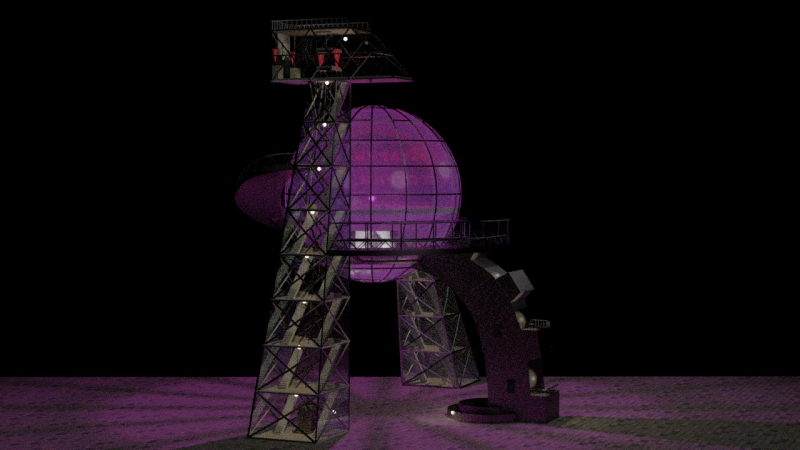 Sofia Petrash is a graduate of ITMO’s Faculty of Software Engineering and Computer Systems. While working on her graduation thesis, she created a 3D visualization of a large-scale luminous monument, initially designed by inventor Grigory Guidoni in 1927.

The project itself was meant to be a synthesis of various arts, combining theater, a light organ, and architecture. The visualization was done in honor of Grigory Guidoni’s memory and aimed at creating his digital footprint in the modern world.

According to the authors of the project, they wanted to demonstrate to contemporary people that already back in the 1920s the interdisciplinary field of Art & Science was developing in the USSR.

Olga Kolganova, a research associate at the Russian Institute of Art History who studies Guigoni’s heritage initiated the project. Together with Sofia Petrash and her supervisor, Anna Spiridonova, a senior lecturer at ITMO, they brought one of Guidoni’s concepts to life in the form of a 3D model.

A little bit of history

Artist Grigory Guidony and sculptor Naum Mogilevsky started designing a luminous monument celebrating the decade of the October Revolution in 1926.

“Ideologically speaking, the luminous monument was meant to demonstrate the greatness of the Revolution and connect the emerging artistic style to the splendor of the St. Petersburg period. It was also reflecting on the power of the proletariat and the great leader of the Revolution – all of this “could hardly be achieved by a usual monument”, as was marked in the press at the time,” states Olga Kolganova in her article.

She started researching Guidoni’s heritage 8 years ago. According to Olga, the 1910-1920s saw a surge of interest in synthetic art forms, especially those combining light, color, sound, and movement. The researcher got the chance to learn more about the monument when she was preparing the material for the exhibition “Globes. Architecture and science study the world”, which presented architectural projects inspired by the shape of the Earth.

The exhibition itself took place in Paris in 2017. It featured a model of the luminous monument made by the Prometheus creative association (project lead Ruslan Sabirov), which became one of its key exhibits.

At the same time, an ITMO researcher Anna Spiridonova started delving into the history of light art. According to her, she was influenced by a contemporary digital visualization of Giacomo Balla’s Fireworks (1917) which she saw by chance. This led her to the thought that creations of Russian artists combining light and music also had to be represented in the digital realm.

“At my program and at ITMO’s Center of Usability and Mixed Reality we have long been working on projects in the field of cultural heritage preservation. For instance, we reconstructed the Solovki ensemble and a part of Feodorovsky Gorodok in Pushkin. I am currently writing my PhD thesis on light art in the age of Russian avant garde, which came before Guidoni; I am studying the background for light art that can be found in paintings and the theater,” explains Anna Spiridonova.

Anna suggested an ITMO student Sofia Petrash to create a 3D visualization of the monument as a graduation thesis project.

“When I entered ITMO, back in my first and second years of studies, I wanted to try and combine the auditory and visual arts. Then, I saw Guidoni’s luminous monument mentioned in Anna’s list of potential thesis topics. I read about Guidoni and got interested in the project because it was the chance to combine light, music, and 3D modelling,” says Sofia.

The project was presented for the first time in October 2020 at the international Galeyev Conference in Kazan. It is there, in Kazan, that the Prometheus research institute has been working since the 1970s, bringing together both researchers and combining light and music from all around the Soviet Union.

At the core of Guidoni’s project was a giant globe made of matted glass. It was supposed to contain a theater of light in its northern hemisphere and a cinema in the south. The globe was accompanied by a sickle and a hammer that served practical means: their handles meant to house exhibition halls and elevators, a “Lenin corner”, as well as a landing platform for planes and zeppelins.

The globe was circled by a sightseeing platform. The monument was designed to be ginormous. According to Guidoni, the globe could have been several times bigger than the dome of the Leningrad Circus on Fontanka Embankment.

Guidoni planned for a light orchestra to be located in the theater. For this aim, he developed and patented his own light and color tool set and created a number of light and color scores. Sofia and Olga used one of the remaining scores to visualize a piece of Beethoven's Symphony No. 9 in Guidoni’s system that can be heard in the final model.

To recreate the luminous monument in 3D, Sofia made a blueprint of the model based on the single remaining photo and several pictures from 1927. Sofia had to design the light theater herself, as there was not enough data on this element of the project. It was supposed to feature a stage in the middle, where four plays could be simultaneously performed. Sofia used AutoCAD, Blender, Photoshop, and DaVinci Resolve to bring the project to life.

According to her, one of the hardest parts of the project was deciphering and implementing the light and color score. This stage, as well as the complete 3D model was finished in the year marking the 125th anniversary of Guidoni.

According to Anna Spiridonova, even if the project was created in the 1920s-1930s, it could not have survived to this day. Primarily due to the materials that would’ve been used at the time, as well as the potential neglect that might have befallen the monument at certain historical periods. The 3D model, on the other hand, is available to anyone interested.

“Art historians see a continuation to our project. For instance, Antonio Geouza, who facilitated  our session at the conference, asked us, where we wanted to locate the monument. This, however, is not the first issue to address, that being the whole possibility of construction. I think it is manageable. I had an idea of suggesting this project at an architectural contest. Though it would only be Guidoni’s original concept, without the Soviet symbols. However, to bring this project to life, an architect would require substantial funding,” concludes Olga Kolganova.

The Galeyev – Prometheus Foundation is working on a 3D tour of the new exhibition “Prometheus of the space century. Bulat Galeyev – 80” opened at the State Museum of Arts of the Republic of Tatarstan. The tour will also feature the 3D model created by Sofia Petrash. The authors of the project are hoping that the 3D model will accompany the actual one on any future exhibitions. Meanwhile, work on the project is ongoing, as new facts and design elements are being discovered and added to the model.

“Sofia has helped Olga to visualize something that is hard to visualize. She managed to create a form, an image for future research. I find it really interesting to link graduating students with art historians, who have a pool of information they can share with as broad an audience as possible thanks to modern technologies,” comments Anna Spiridonova.

“In my opinion, such models have to be exhibited at contemporary exhibitions at The Centre Pompidou or the Tretyakov Gallery, when paintings, sculptures, or architectural mockups are accompanied by screens or 3D glasses so that we can better understand the artist’s idea,” adds Olga Kolganova.