St. Petersburg is a city of incredible beauty and architecture. From the stunning Catherine Palace in the southern suburb of Pushkin to the Winter Palace right in the center of the city, St. Petersburg is a blend of Baroque, Classicism, Eclecticism, and Art Nouveau. But while the city center denounces high-rise buildings, the outskirts tell a different story. In a city of over 5 million residents, where does everyone live and what can you find if you venture out beyond the historical districts? Each layer of the city was built during a different era and reflects the history and attitudes of that time. Check it out. 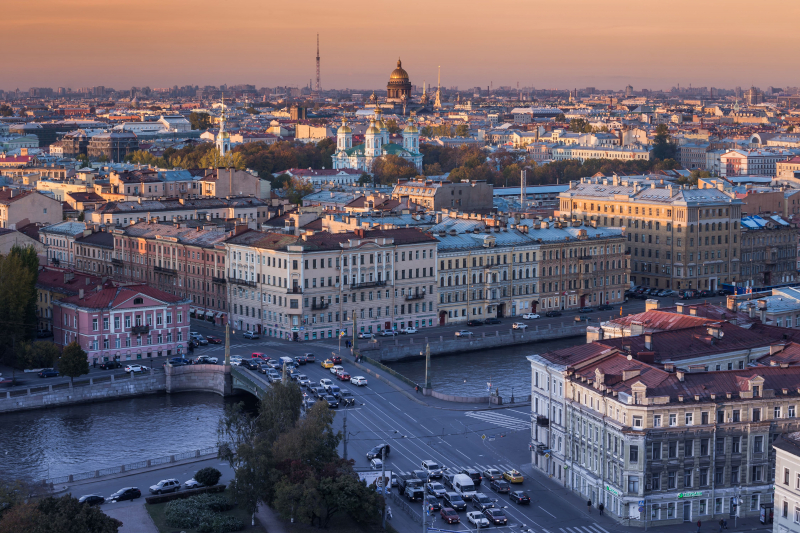 A heat map of construction dates for buildings in St. Petersburg. Credit: how-old-is-this.house

The city center is known for its architectural marvels, canals, and bridges based on Amsterdam and Venice, and churches and palaces on every corner. While no one lives in the palaces anymore, the central district of St. Petersburg, with its mass of universities, museums, tourist attractions, and offices, also houses about 220,000 people living in conditions ranging from a small bedroom in a communal apartment to a large 7-bedroom apartment with views of the Neva River, all within walking distance from the famous Nevsky Prospekt. The central district, together with parts of Petrogradsky Island and Vasilievsky Island, which were primarily built during the first 200 years of St. Petersburg’s history is devoid of high-rises by law and boasts similar architectural beauty and buzzing nightlife. During that same period, parts of St. Petersburg's suburbs such as Kronstadt, Pushkin, Pavlovsk, Peterhof, Lomonosov, and Strelna were also built up, many acting as summer retreats for the nobility.

During the Soviet times, a lot changed in St. Petersburg (called Leningrad at the time), particularly its architecture. During Stalin’s time, apartment buildings known as Stalinki were built all across the city of Leningrad; you can now see such buildings on Moskovsky Prospekt, near the Lomonosovskaya metro station, or in the district of Kolpino. In the post-war years, the so-called “German cottages” were also often built in different areas of St. Petersburg; you can find these low-rise buildings scattered across the city near the Chernaya Rechka, Narvskaya, and Elizarovskaya metro stations. The origin of their name is that in some cases they were indeed built by German prisoners of war. When Nikita Khrushchev came into power, Khrushchyovkas became prominent across Russia. Their low cost and quick construction time meant that these 3-5 story buildings offered a decisive response to housing shortages. Such buildings can be found across the city but particularly in the Nevsky and Kalininsky districts. Towards the end of the Soviet era, in the 70s and 80s, imposing 9-15 story buildings known as “korabli,” or “ships,” were also built around the city, particularly in Krasnoselsky District and between the Grazhdansky Prospekt and Prospekt Prosvescheniya metro stations.

High-rises in the outskirts

As the population simply keeps increasing, the housing shortage never seems to go away. Although skyscrapers are a no-no in the historical center, anything goes in the outskirts; it almost feels like you’ve entered a different world. With less and less space within the border of St. Petersburg, construction is moving further out to districts like Shushary and Parnas, or even into the Leningrad Oblast, where settlements like Kudrovo and Murino are growing rapidly. There, you can find massive modern new high-rise communities.

Composed mostly of studios and single-bedroom flats, they have been built with the main purpose of housing as many people as possible. In a challenging real estate market, young people looking to buy an apartment and start their own family find it much more affordable to get something new in one of these newly-built up areas. You can find buildings up to 25 floors in such areas. One such building in Kudrovo, which has 35 entrances and 3,708 apartments, recently went viral online, provoking astounded remarks from users around the world. There are mixed reviews on what it’s like to live in such areas: some say it’s challenging because of the constant construction, lack of infrastructure, and distance from metro stations. Also, the abundance of rental apartments makes it difficult to build a sense of community. On the other hand, such buildings are brand new and there are cafes, restaurants, and shopping centers all within walking distance.

Many St. Petersburg residents have a place outside the city and a garden to spend the summer; sometimes there is running water and electricity, sometimes not. Usually, these dachas are located outside St. Petersburg in Leningrad Oblast, or even beyond. These days, wealthy families choose to either build up their dachas into comfortable homes or simply buy so-called “private homes” or “cottages” outside the city for all-year-round living. With the construction of modern highways and developed infrastructure, it’s more than possible to make it work. Within the city of St. Petersburg, you can also find areas with one- or two-story homes with their own garden. Such areas of the city are rare but do exist here and there, for example near the Ozerki and Udelnaya metro stations.

To get a taste of St. Petersburg’s layers on a map, check out this amazing guide with dates and years and pictures. So if you’re thinking of checking out some of these locations, get on the metro and get out and explore!