It’s no secret that the St. Petersburg Metro is one of the world’s most exquisite and beautiful underground transit systems. But its interiors aren’t the only things worth noting. While anyone with even a cursory knowledge of the Russian language will probably be able to glean the meanings of most of its stations’ names, there are a few that would require a bit more in-depth knowledge of Russian culture. Today, we’ll look at some of the stations that bear the names of Russian writers, poets, and other masters of the written word. 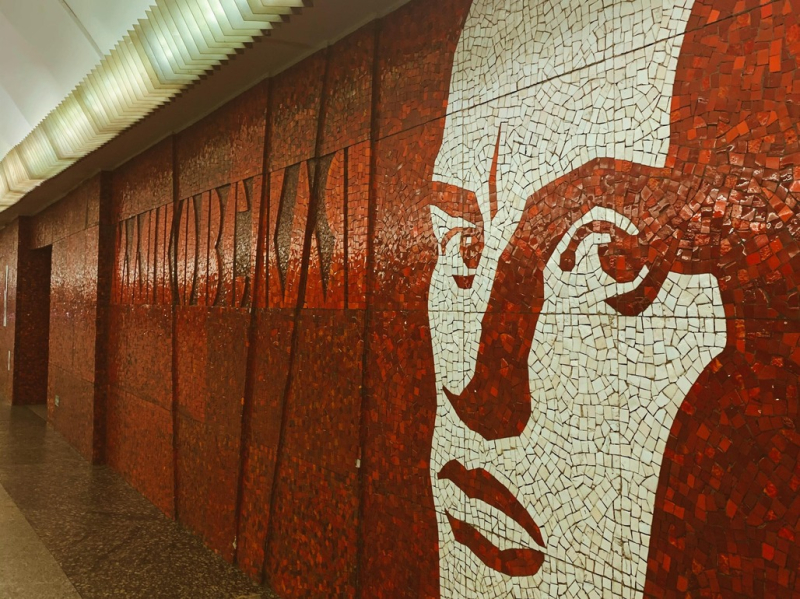 Vladimir Mayakovsky's visage in a mosaic at the Mayakovskaya station. Credit: saint-petersburg.ru

Perhaps the Metro’s most visually striking station, Mayakovskaya bears the name of Vladimir Mayakovsky (1893-1930), a bombastic Soviet futurist poet. Many of the brash, vivid lines he authored have since become popular expressions.

Named after the Russian 19th century philosopher Nikolay Chernyshevsky (1828-1889), the Chernyshevskaya station’s simplistic design marks a key point in Russian history: unlike the Metro’s first 8 stations, its design is decidedly more austere, a reflection of the sudden political shift in architectural aesthetics that followed the death of Joseph Stalin. Chernyshevsky himself was a prominent socialist writer and revolutionary who is today best remembered for his novel What Is to Be Done. Together with Alexander Herzen’s Who Is to Blame, the two books are said to represent the two key questions of Russian culture and mentality – so check them out if you’re looking for insight into the “Russian soul”.

It would be difficult to have a conversation about Russian culture without talking about Alexander Pushkin (1799-1837), widely considered the nation’s greatest poet. The author of such staples as Eugene Onegin, Boris Godunov, The Bronze Horseman, and many more, he is also remembered for his association with the Decemberists, his turbulent personal life, and his death in a duel. The conflict-prone poet is said to have been challenged to six duels in his lifetime, while the man himself issued fifteen such challenges to others.

Located steps away from ITMO University’s main building at Kronverksky 49, the Gorkovskaya metro station bears the name of Maxim Gorky (1868-1936), born Alexei Peshkov, a prominent Russian and Soviet writer, whose nearby apartment was a hotspot for creative minds of the 1920s – even hosting the famed writer Orson Welles at one point. Best known for his play The Lower Depths, which, in the words of famed theater critic Oliver Sayler, centers on an “intangible flow of human souls in endlessly shifting contact with one another”. Orphaned at an early age, Gorky had a troubled youth and spent years as a nomad, train hopping all over the vast Russian Empire. By 1986, he had become the USSR’s best-selling Soviet writer, and second only to Pushkin and Tolstoy among Russian writers. In fact, he proved so popular that the city of Nizhny Novgorod was instead named Gorky from 1932 to 1990.

This orange line station was named for its proximity to the former apartment and now museum of Fyodor Dostoevsky (1821-1881), arguably the world’s best-known Russian writer, whose psychological novel Crime and Punishment has been subject to several dozen film and TV adaptations and was repeatedly named one of history’s most influential works of fiction. Several years ago, researchers from ITMO University began using advanced optical equipment to uncover the mysteries of Dostoevsky’s sketchbooks and establish a precise chronology of his works. The project is anticipated to be complete by Dostoyevsky’s 200th anniversary of birth in 2021.