Faster, Bigger, Livelier – Notes From the 16th Bike Ride With the Rector

The first in this academic year, but 16th overall – yesterday’s traditional Bike Ride with the Rector coincided luckily with the last day of a short Indian summer. The event brought together dozens of students, lecturers, and staff of ITMO University. Together, they traveled the customary route through Primorsky Victory Park and over Yakhtenny Bridge. Despite a busy schedule, the university’s Rector Vladimir Vasilyev led the event – and so did the staff of ITMO.NEWS. Here’s what we saw there. 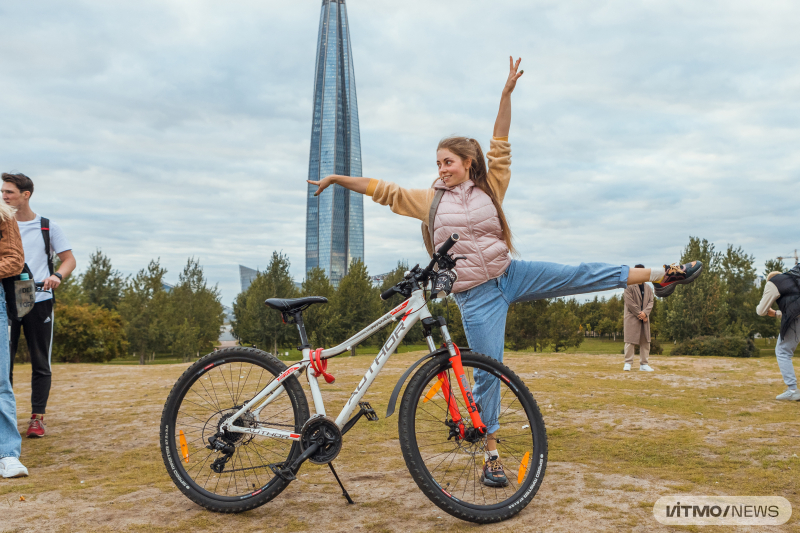 The 16th Bike Ride with the Rector. Photo by Dmitry Grigoryev / ITMO.NEWS

The bike ride is perhaps the oldest and most beloved of the university’s traditions. Twice a year, in May and September, many students, lecturers, and staff meet with Rector Vladimir Vasilyev and First Vice Rector Daria Kozlova at the Krestovsky Ostrov metro station to enjoy a picturesque route towards the Gazprom Arena and Lakhta Center.

For first-year students, it is a wonderful opportunity to have a taste of ITMO’s special atmosphere and the openness, friendliness, and equality between students, teaching staff, and the administration. And for staff members, this is yet another chance to get together, socialize, and get to know each other in a less formal setting. And, of course, to take some selfies.

Usually, the bike ride tends to have a lax pace, with the participants taking a while to gather and often stopping along the way to rest and take pictures. But not this time around. The riders took off nearly immediately, so stragglers had to pick up the pace to catch up. It was a swift ride through the park and towards Yakhtenny Bridge; it only took the participants 20 minutes to reach the monument in 300th Anniversary of St. Petersburg Park, which is where the group traditionally turns around to ride the other way. The return trip was just as quick.

But according to the riders, this fast-paced ride was even more enjoyable than a more breezy one. The adrenaline and intense workout seemed to ignite everyone’s imagination – should they, perhaps, do something more extreme next time, like hold the bike ride in a skate park?

This is my first bike ride even though I’ve been working at ITMO for four years now. I came here because it’s now possible to rent a kickscooter via a partner program – I really like kickscooters, but I don’t find bicycles too comfortable. It would be really cool if we had an extreme sports club at ITMO – I think it’d be very popular. Just imagine: a skate park get-together with the Rector.

The bike ride itself, as a concept, is a logical fit for ITMO’s atmosphere – fun, friendly, and unrestrained. It’s an organic part of university life.

I was a student at ITMO for five years and I’ve been a staff member for two, but this is my first time taking part in the bike ride. I decided to come since I have finally bought myself a bike; and the weather today is good, too. I’ve only got good things to say about today’s ride – I really loved the speedy parts, they were breathtaking.

My friend told me about a competition on ITMO’s English-language VK page – the winner would get a free rental bike for the ride. I decided to take part and happened to win, so here I am. I really enjoyed the ride – I haven’t been to this part of the city before, didn’t even know about it. Turns out it’s a very nice place to have a walk and gaze at the Gulf of Finland.

First-year Bachelor’s student at the Faculty of Infocommunication Technologies

I love cycling in general, and here was such a wonderful opportunity to join a group ride. To me, it’s a great way to integrate myself into life at ITMO. I really loved the speediness of the ride – I decided it would set the pace for this academic year.