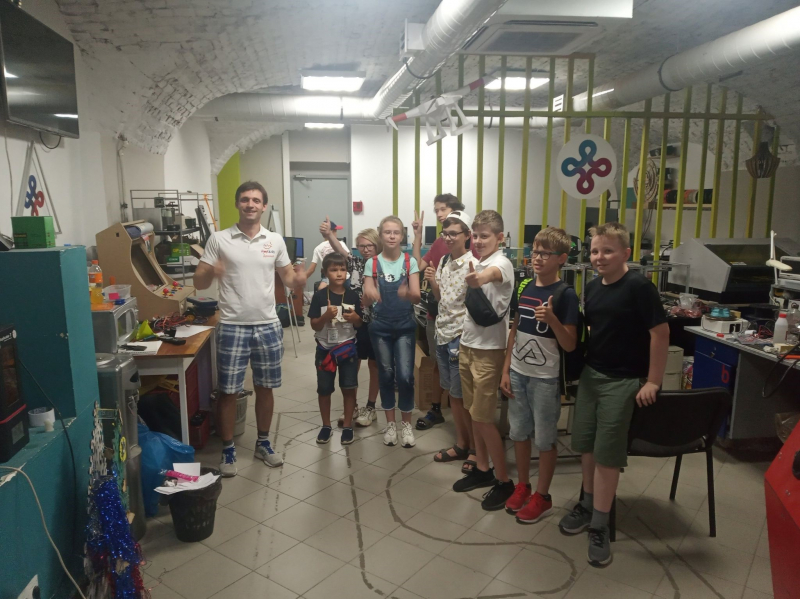 At the ITMO.KIDS summer school. Photo courtesy of staff

This year, the ITMO.KIDS summer school took place on-site, bringing together children of different ages. Over the course of five days, they acquired the basic skills of design and engineering. Their ultimate goal was to develop their own device: a “secret” combination lock. Four different teams worked on the task, each presenting a remarkable concept.

The school itself was hosted by two staff members of the children’s technopark: Daniil Sharov and Ruslan Bobko.

“If you convince a kid to do something worthwhile today, they’ll continue to reach for new heights tomorrow. I love helping children grow and develop!” says Daniil Sharov, a lecturer at the children’s technopark and an engineer at the Center for Exhibition Planning.

All of the school’s days were highly eventful. First, the participants got to know each other and formed teams, choosing team names and logos. Their homework assignment was to develop a design for a combination lock. On the second day, the children considered the proposed concepts and fleshed out their projects. Over the third and fourth day, the young students drew up and assembled the boxes which were to be protected from “unsanctioned access” and integrated their security systems. On the fifth and final day, the teams made final modifications and improvements to their devices.

“A summer school is always more than a simple week-long intensive course. It has its own atmosphere; you feel responsible for all the children and do your best to unlock each one’s potential to the full while maintaining an atmosphere of healthy competition for all five days,” says Ruslan Bobko, a lecturer at the children’s technopark and head of ITMO’s FabLab.

It must be pointed out that the project teams were not formed randomly. Each participant was interviewed to determine their key competencies. Then, the teams were formed so that each would have a relatively similar amount of diversity of skills – which not only put them on equal terms with each other, but also allowed them to involve each member in the team’s efforts to the fullest extent.

“This is far from the first school we’ve held. To us, these events have become an enjoyable summer tradition. I believe that working with kids pays off and in the future the knowledge they’ve acquired here will serve them well in their new endeavors. After all, we’re not only giving them practical skills such as knowing how to work with software or to engineer things, but we’re also teaching them soft skills – the ability to work in a team, to think analytically, to follow their goals and to know how to properly distribute their time,” comments Aleksei Shchekoldin, head of the kids’ technopark.

The ITMO.KIDS technopark hosts regular paid and free events that are open to all participants. Learn more about it at https://kids.ifmo.ru/ or on the technopark’s VK and Instagram pages.