Every year, the December issue of Optics & Photonics News includes a list of the year’s 30 most impactful studies in the field of optics and photonics. This year, it features research by scientists from ITMO University who have succeeded in demonstrating record-breaking efficiency in light coupling at large incidence angles. ITMO.NEWS spoke to Oleh Yermakov, one of the authors of the study and a researcher at the university’s Faculty of Physics, to find out how the team plans to develop their research in the future. 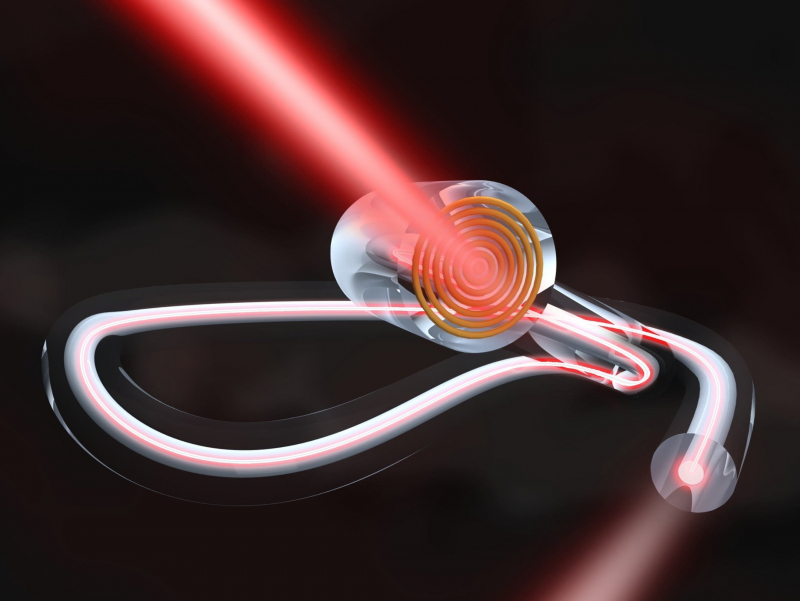 In their work, written in collaboration with researchers from the Leibniz Institute of Photonic Technology and the Australian National University, scientists from ITMO University have suggested using a dielectric nanostructure made of silicon nitride installed at the end face of an optical fiber in order to amplify the efficiency of light coupling. The study was conducted with the support from the Foundation for the Advancement of Theoretical Physics and Mathematics (BASIS), the German-Russian Interdisciplinary Science Center (G-RISC), and the Russian Science Foundation.

The efficiency of light coupling in optical fiber falls rapidly at large incidence angles. For instance, at an angle of only 15 degrees the value nearly approaches zero. This is a significant obstacle in the development of remote light collection that limits the possible applications for optical fiber in medicine – for measurements made within living tissues, such as during endoscopy, – in quantum technologies, and in biodetection, including when capturing single photons and molecules.

But the scientists were able to resolve the issue by installing a dielectric nanostructure on the end face of an optical fiber. This resulted in the amplification of light collection efficiency by a thousandfold when compared to existing counterparts at incidence angles up to 70 degrees and higher.

In 2021, the team submitted an application to have their work included in the special December issue of Optics & Photonics News. According to the regulations, each application is evaluated by 5-6 representatives of the international Optica community – a group of experts in the fields of optics and photonics. Then, the special issue’s editors picked the 30 most important research projects published between September 2020 and August 2021.

According to the researchers, their work’s inclusion on the list is not only an honor and a sign of prestige, but also an opportunity to draw more attention to their project and the interdisciplinary research being done at the intersection of fiber optics and nanophotonics.

“I think there are several reasons why our project was chosen. First of all, we were able to demonstrate a remarkable improvement in the effectiveness of an important everyday technology. Increasing the productivity of solar cells by even 0.5% is already a substantial result, but we were able to improve the effectiveness with which light is collected into optical fiber by at least 10,000 times. Such a result is hard to ignore. Secondly, this project has allowed us to lay the foundation for a new interdisciplinary scientific field that brings together fiber optics and nanophotonics. We proved that “upgrading” optical fiber with nanophotonic structures is a promising endeavor and may lead to significant increase in functionality. And lastly, the results of our work may find a real practical application in, among others, endoscopy and laparoscopy. We believe that the results of our future research on this subject will eventually have an impact on our everyday lives,” notes Oleh Yermakov.

Structurization of optical fiber is a complex process. But in recent years, the development of technologies for the production of nanostructures on unconventional substrates has allowed scientists to make significant advances in this field. According to the researchers, their study’s remarkable results can be credited to coordinated efforts of theoretical and experimental scientists and engineers. In the future, they plan to reduce the nanostructures’ cost of production and develop an automated algorithm for the optimization of their design. The scientists believe that it will take approximately five years to develop a final product and begin its integration into the industry.