It was the first time when such a top level meeting as ITMO International Council’s session opened its doors for students. We’ve got some insider information by Yaroslav Golubev, third-year bachelor student at Faculty of Laser and Light Engineering, who was one of three ones who got lucky. Yaroslav shared something that we would never find in official reports, and talked about how he became less suspicious of importance of official meetings. 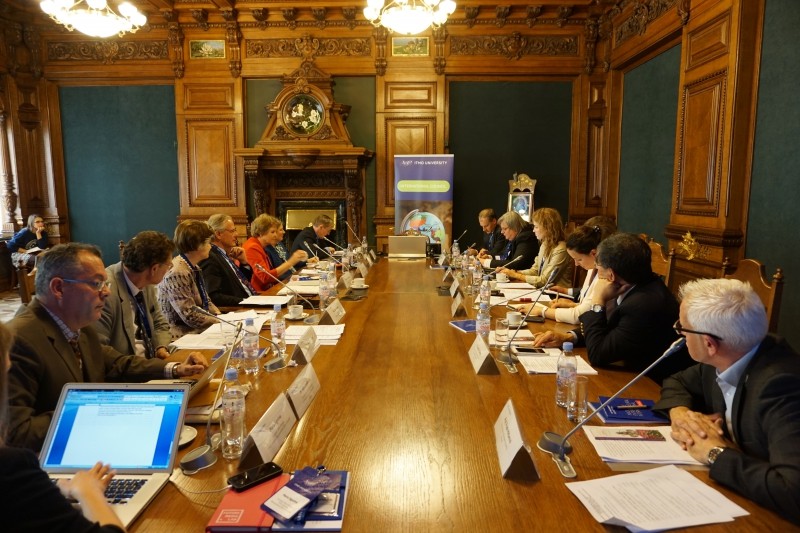 Looking at the meeting from newcomer’s point of view allows to flag up questions never raised before. Why does the Council need to involve students in the complicated decision making process? What benefits can be reaped by students?

As enthusiastic students who focus not only on studying, but also on social and university activities, Yaroslav and his peers took a chance to share the needs of the whole student body of the University with IC members. They made speeches on important issues such as involvement of youth in research processes and the image of a modern student, talked to IC members and asked lots of questions.

The experts discussed changes of university structure and correlation between new strategic units as well as recent progresses that contributed to the university’s rise in rankings, and methods of how to measure such subjective things as investment attractiveness.

"Before visiting this meeting, solutions related to the university’s development seemed easy and ordinary to me. I was surprised when realized how complicated they are." It is true that those who have never looked into something in detail have no idea how it works in reality. For instance, Yaroslav was sure that important decisions are made behind closed doors and that most official meetings are ostentatious. After visiting it, he changed his mind.

"The meeting consisted of three sessions. We attended all of them, listened to discussions on agenda points and asked questions. Apart from that, we had an opportunity to talk to members of International Council during the braks between sessions — this impressed me much more, as we discussed education, politics and other things in informal way."

The student also noted that officials have to meet with students regularly. "I wish such events were open for Bachelor’s, Master’s and PhD students because all of them have different points of view." He also suggested that even freshmen might be invited — it would make them feel that their opinion is important, and motivate them.

Furthermore, top-level experts and heads who have no contacts with students due to they deal only with administrative affairs — they lose touch with them despite the fact that student community is the main element of higher education.

It is obviously that such a complicated process as higher education call for all its participants to be involved. Such a trend, when an important event becomes open for students, is one more step toward making a transparent system with clear and comprehensible solutions.