“Night of Light” in Gatchina

On the night of August 12 to August 13, the “Night of Light” will be held in the town of Gatchina. This year the event will expand significantly and turn into a full-fledged festival of light art. The territory of the Gatchina State Museum-Reserve will be home to 20 light installations by participants from Russia and Lithuania; 20 more installations will be presented outside of the main competition. This year’s theme is “Laboratory of Dreams”. Students from ITMO’s Higher School of Lighting Design will present three projects at the festival; their works are included in the short-list for the light installation competition that will be held during the event. We talked to the teams to learn more about their projects and find out about their meaning and structure. 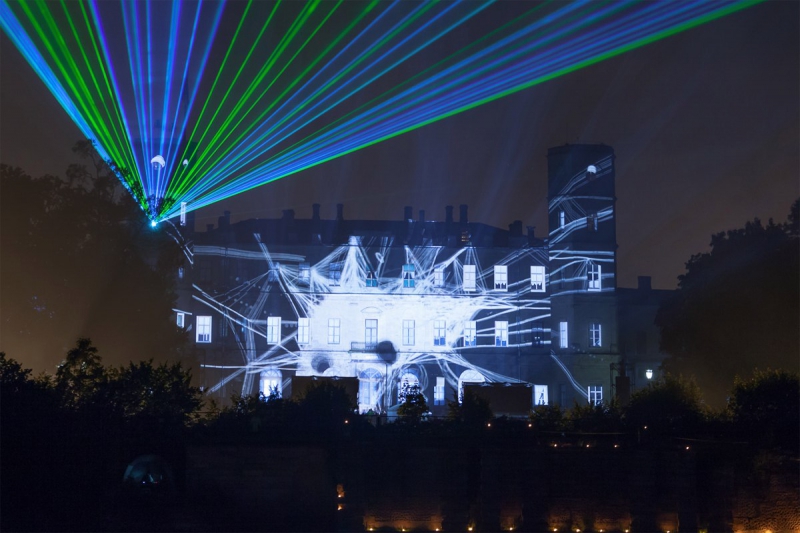 For this project, students from ITMO University’s Higher School of Lighting Design will utilize a historical object on the Gatchina Park’s grounds – the Jordanian Well. The project’s authors want the guests to consider the object’s vertical plane – where air, earth and water converge – as a link between the real world and the world of dreams. Visitors may project the images of archetypical dream images – time, fish, shadows, ego, etc. – onto the flat surface of the water. The images will appear in the form of animated collages with separate parts highlighted with colors. The authors promise to explain the meaning of each image to the audience; however, understanding the relation between images is something that everyone will have to do on their own.

The installation is based on common symbols and images that work on a subconscious level, say the authors. For example, one of the most telling images is that of apples – an ancient symbol of discord. In some cases, visitors will witness the metamorphoses that happen to people over the course of their lives: one such image is a human jumping through a ring of fire (a metaphor for hardships of life) and coming out of it in the form of a tiger. Another key image is that of time, something that is beyond man’s control.

Illuminated stones will draw the guests’ attention to the well, and once they approach the structure, the images will come to life. As the authors explain, the content will be unique in case of each visitor and the whole experience will be augmented by sound effects.

“The installation is randomized each time. It includes collages, some of which are animated. In this project we want to reproduce the multi-layered nature of dreams: there are metamorphoses there, incompatible objects become one, and images are overlaid over one another. Our collages will reflect that surreality,” – explains Daria Chirimisina, one of the project’s authors. A motion sensor will allow the project team to track the guests’ movement. When triggered, it will change the images projected onto the water surface. The project also utilizes a wireless speaker combined with a projector and a microcomputer. All of these devices are placed inside the well and cannot even be noticed from outside due to their miniature size. The creators used TouchDesigner, a visual software used to develop interactive environments. The collages were created in Adobe’s Photoshop and After Effects products.

“We decided to address the history of Gatchina Park: we looked up the architect who designed it. His name was John Bush. We thought: if an artist can see their future works in a dream, why can’t an art object dream about its author, even after he is long gone? The image that Gatchina Park sees in its sleep are the eyes of the architect who designed it more than two hundred years ago,” – says team member Roman Antonov.

In the installation, John Bush’s eyes follow the park’s visitors with attention and curiosity. The authors decided to project the eyes on top of a natural landscape: as soon as someone approaches the installation, they awaken to look at the guests, evaluate them and even interact with them.

The technical aspects of the work are mostly similar to those used in the “Portal” project. To make the system react to each individual, the system uses motion sensors attached to ground lamps. Both the lamps and the sensors are autonomous and are placed as points of interaction. These points are spots of light on the ground; by stepping over them, a guest makes their location known to the eyes. This is how it looks to an outside observer: someone approaches the field of light and is greeted by the eyes opening and staring at them. If the viewer stands in the same spot for a while, the eyes will begin to interact with them. They could even wink at them, for example. The installation uses a total of three light spots placed six meters away from the eyes. The project also uses sound effects. Whenever one approaches the eyes, they will hear the sounds of birds and other sounds of nature that create a unique atmosphere. The creators note that, to use a natural surface for the eyes, they had to reject their original concept of images projected onto trees and choose a flat, unbroken surface. Guests of the park will get to witness the eyes of Gatchina Park’s architect at the height of three meters as the image will be projected onto the park’s thick hedges. The project employs a short-throw projector placed as close to the surface as possible, so as not to have the guests interfere with the image. This project, just like “Portal”, was developed using the TouchDesigner software.

Moon water is yet another project by ITMO University’s Higher School of Lighting Design – a dynamic light installation which consists of a giant teacup prop and white inflatable baloons. A unique feature of this installation is its placement: the giant upside-down teacup and the bubbles streaming out of it are placed above Gatchina Park’s White lake. The cup is suspended two meters above the surface of water. The other part of the structure is situated directly in the water, meaning that, unlike many other installations, this one can’t be interacted with by the park’s visitors.

The main association that creator Valeria Mikolyuk wants to evoke in viewers is that of moonlight, with a hundred bubbles reminiscent of a hundred moons strewn across the smooth waters of the White lake. The hovering effect is achieved through the creation of a light structure – the cup is made of synthetic foam and primed with a special water-resistant coating. The “bubbles” are high-duty latex balloons coated in white matte paint. As the project team notes, the illusion of a giant dinnerware cup floating in the air with bubbles streaming down from it will remind the viewers of warm evenings, fairytales and dreams. The reflection from the lake’s surface is a key element of the project which the author uses to imitate the effect of moonlight on a still lake. Ms. Mikolyuk intentionally tried to avoid using too many colors; the bubbles are all white, yet they are illuminated with varying intensity. The use of half-tones can help imitate the different states of the moon. To make the bubbles all shine differently, the team uses LED light strips to illuminate the first group of balloons which surround the frame of the structure and stream directly downwards. The second and the third groups of “moons”, which lay on the surface, are illuminated by a customized LED network which is connected to each of the balloons.

According to Valeria, the installation does have an interactive part – guests can touch the single balloon placed near the shore and make a wish.