ITMO University is one of the best engineering schools in Russia, according to Prime Minister Mikhail Mishustin. He recently visited the new under-construction campus of Kapitza Phystech Lyceum of Natural Sciences and Mathematics, attended classes, and talked with the school’s students and graduates. At the meeting, he shared plans for large-scale support of engineering education in Russia. 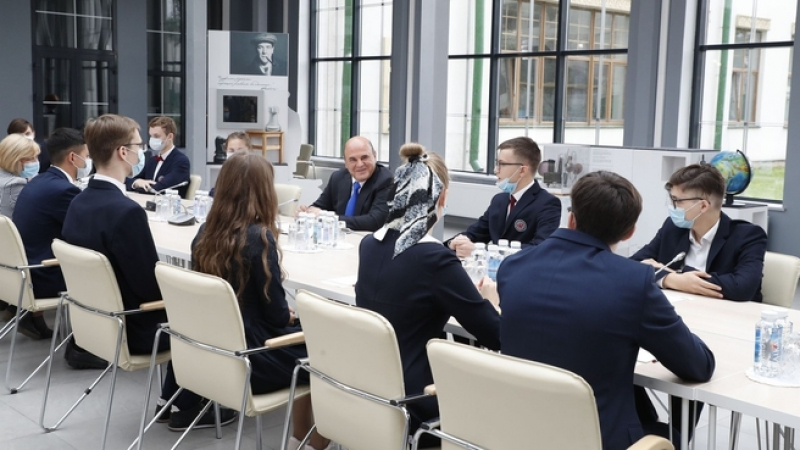 The lyceum collaborates with leading Russian educational organizations, including ITMO University. In 2021, it entered the top-10 of the RAEX national school ranking.

According to Marina Mashkova, head of the lyceum, the school’s students win various competitions every year and often score maximum points at the Unified State Exams in several subjects at once. The graduates of the lyceum also make it into the country’s leading universities.

“Our graduates have been enrolled at top universities such as Bauman Moscow State Technical University, ITMO University, and Moscow Institute of Physics and Technology (MIPT) for seven years in a row,” says Marina Mashkova.

Petr Volnov, a graduate of the lyceum, was admitted to ITMO thanks to the ITMO.STARS competition that helps promising applicants to be enrolled for their achievements and projects. Now he works at a company that is engaged in video analytics of sports events and works on a project that recognizes samples of sports training sessions and automatically evaluates the way the exercises are done. The project is implemented with the help of Phystech Lyceum and ITMO, where the developers have already organized online PE classes for testing.

Petr Volnov, student at the Information Technologies and Programming Faculty:

“When my classmates and I were applying for universities, ITMO was one of the options. Of course, I knew about it thanks to the success of its students in competitive programming and the recognized department of Parfenov (now known as Information Technologies and Programming Faculty, with Vladimir Parfenov as the Dean – Ed.). Moreover, it was only at this university where I found a program like ITMO.STARS which helps you apply to the university by presenting your achievements. Thanks to it, I was admitted to the faculty I wanted to study at,” says Petr Volnov. “I’m studying at the Computer Science and Programming program on the Applied Mathematics and Computer Science track. Our studies are balanced and more practical compared to similar programs in other universities. Another advantage of ITMO University is the opportunity to take some of the subjects remotely. This helps manage your time, plan your studies, and switch between them and your job.”

One of the key topics discussed at the meeting with the school’s students and graduates was the future of higher education. Vasily Pislyakov, a student at the lyceum and a winner of regional competitions, asked the Prime Minister to talk about the future of engineering education and technical universities.

“Do you consider MIPT to be the best engineering school? Yes, it is. Just like ITMO and Bauman Moscow State Technical University. We are proud of these universities and they are highly promising. They have an excellent past, present, and future,” says he.

According to the Prime Minister, the government pays a great deal of attention to the development of universities. In particular, the Russian President’s new national project focused on social and economic initiatives will contribute to this objective. The project involves the creation of 30 leading engineering schools.

“When it comes to educational programs, I can say that in the upcoming three years the federal budget will provide more than 1.5 trillion rubles on scientific research. This is an enormous amount of money and the government offers such an opportunity because there’s nothing more important than creating high-quality schools,” says Mikhail Mishustin.