At the end of March, the St. Petersburg HackDay was held, where young and experienced developers from different cities in Russia met in order to further develop their startups, and to finally implement ideas that have been floating around in their minds for a long time, and to have a good time. For several days, the NONAME coworking center became the team’s workshop, a dining room, a bedroom and a conference hall, as the HackDay participants only had 48 hours to complete their projects and submit them to the panel. 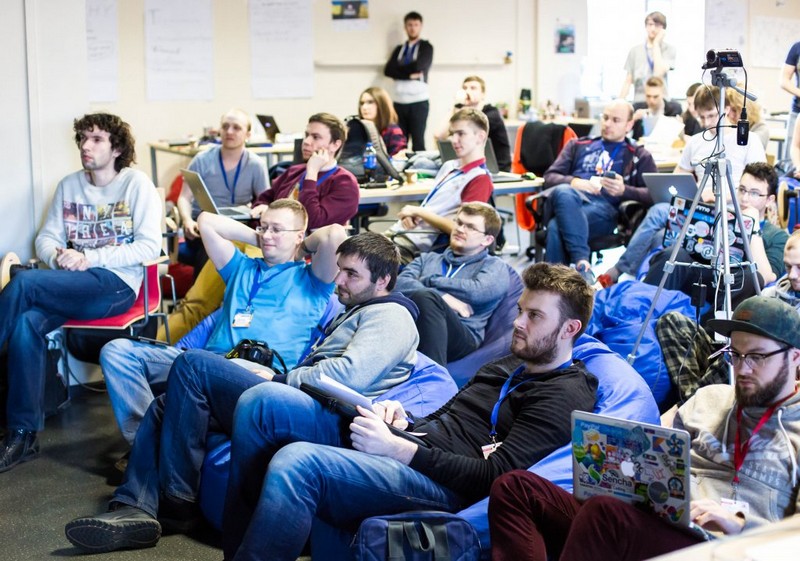 What happens at Hackday, stays at Hackday: within a few days of their stay, the traditional hackathon coworking space became homely and lost its official air which characterises many startup events. On the walls hung large sheets of poster paper with the team names, project concept designs and descriptions of what they need: someone was looking for a person who can work with the web, someone else with an unusual need, like a girl with a nice voice. On the tables were packets of a common Russian snack “sushkis” and steaming instant noodles, and young people were walking around the place in slippers.

Participants what makes HackDay so attractive is the atmosphere. You get out of your normal work-study hustle and bustle routine for a few days and give yourself up to the geek thrill that seizes both students and experienced entrepreneurs. “We are giving people an opportunity to finally gather together and implement ideas that have been floating around in their minds for months. Since 2009, HackDay has been a unique outlet for developers, some people come here to develop their business, someone come to try to implement some useless idea they have to make sure that it is in fact hopeless. Often some R & D teams come from a large company, for whom participating in Hackathon is a particular type of relaxation. For example, this time, representatives of companies came who work with advertising technologies, here they are designing a game. At a professional level, it won’t help them at all, but they came here to be in a different space, to unload their brains, and then return again back to their usual work”.  – said Michael Kechinov, St. Petersburg HackDay organizer and founder of the Studio for software development.

There were quite a few HackDay#41 survivors: from the 18 projects announced before the demonstration, 16 teams made it. Amongst them were serious projects to make communication with specialists from different fields easier for programmers. There are also more “fun” R&D, like project Panchy which by the end of day 2 of Hackathon, had made a smart toilet from cardboard and paper, which automatically raises and lowers the seat. The system responds to the user’s movement and announces all the “ups” and “downs” of the toilet seat with a voice similar to Siri.

The project was a memorable one, however the team didn’t win any of the usual hackathon categories. As usual, the winners were announced for each of five different categories. The biggest one, for an original b2e (business to employee) solution, had three winners who each received certificates for passing the semi-finals of the programme “Telecom idea”2016. Amongst the winners were the Guest Work.Space service which helps one find a suitable workplace in a foreign city, such as a coworking space, anti-café or similar setup.  Another winner was the team who created Voice terminals, an alternative to self-service terminals which often have a non-intuitive interface. Within 48 hours, the team, who came from Skoltech, brought a system together, that could recognise images and voices, and the author of the project tested it by ordering a prototype cappuccino, cheeseburger and potato wedges.

The third project, which was good enough that they could have presented their project to MTC’s top management and could also participate in an accelerator program, was called Rich UI for Bots. They had an idea to further develop a platform for creating complex bots “with a rich inner world”, the two-person team took home the prize for their StartUp and was named the most original b2e solution. The most original 3D application was a Virtual Library project led by Maxim Skorokhodov, a student from the Chair of Informatics and Applied Mathematics at ITMO and a finalist at Science Slam ITMO University. The team consisted of six students from the University and who created from scratch a virtual visualization of Wikipedia articles, allowing the user to literally see the relationships of one fact with another and travel between them.

"Before this, none of us had worked with virtual reality, so this project we essentially produced from nothing. But our lack of experience in this area didn’t bring us down. As avid participants in hackathons, we tried to look into something new, and even more interesting. The important thing was to find an idea that could be created in practice. This gives us motivation and as a result, opportunities for implementing our plans." – says one of the developers of the virtual library, Ekaterina Rumyantseva Despite the different approaches taken for each project, they were all aimed at improving the quality of human life. The startup team, Screenflow, proved that developers are people too, and during HackDay they created a prototype plugin for the graphic editor Sketch, which would give developers and designers an interface that would help them work effectively as a team. Results of their joint work would be in the cloud, and any changes made would be visible in real-time. For his “peacemaking” idea, the project’s creator, Ruslan Jafarov became the winner of the Tech category.

And, finally, for the Hack category, which was created, according to Mikhail Kechinov, in order to acknowledge the most simple, brilliant and pointless R&D of the Hacker weekend, the winner was a lone-startuper, Alexei Veliki. Literally on the last night before demoday, he created a visualisation model of startups in Russia. What was created was a map of Russian startups, showing around 100 regions, in each of which are dashing about a number of red dots, symbolising R&D teams. According to the creator, the model reflects how startups are running around looking for investors.

Organisers of HackDay in St. Petersburg encourage the teams not to split up at the end of Hackathon, like the points in the model: each project, in their opinion, has a bright future if they apply some kind of effort towards its advancement. Michael Kechinov and the expert team are ready to offer consulting and mentoring support to all startup finalists.