How does the nation’s top IT university develop biotechnologies? By bringing in the right researchers! Anna Fakhardo, a second-year PhD student at ITMO’s International Laboratory “Solution Chemistry of Advanced Materials and Technologies” (SCAMT), is one of the first to initiate biological research at the lab. The young scientist also oversees two projects as part of the Pharma 2020 federal program, which both include pre-clinical trials. In late 2017, she became the recipient of the SCAMT Achievement Award. ITMO.NEWS spoke to Anna about her research. 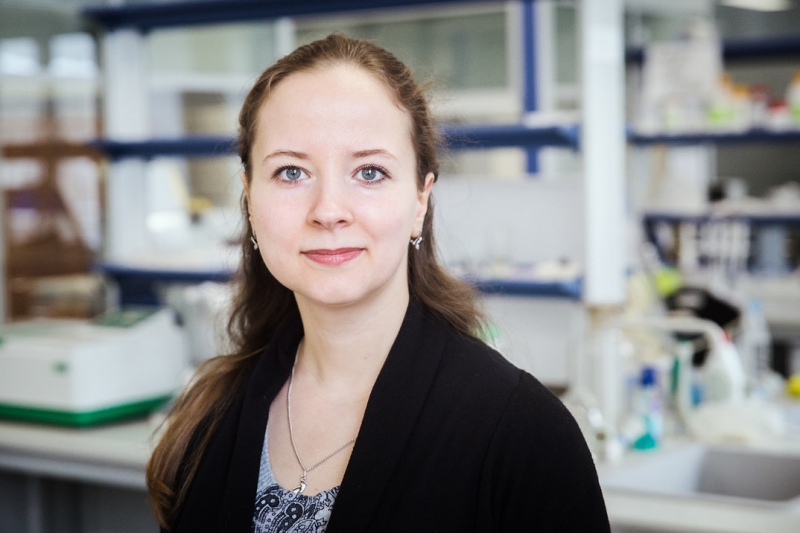 How did you end up at ITMO University?

I got my Bachelor’s and Master’s degrees at St. Petersburg Polytechnic University. At the same time, I carried out research at the Institute of Toxicology at the Federal Medical-Biological Agency. I was going to stick to biology after getting my Master’s, but I also felt like trying something new. It was clear that I wasn’t likely to find work somewhere like BIOCAD without any work experience. I happened upon a job description online that called for a cellular biochemistry specialist at SCAMT Lab. Most importantly, they were looking for someone who would be interested in getting a PhD. This was especially interesting for me. I hadn’t worked in molecular biology prior to that, but I gave it a shot and got the position.

So it was important for you to keep doing scientific work? When did you realize you wanted to stay in this field?

Yes, a key criterion for me was that I’d be able to do research. ITMO University, after all, is a research institute, and science is a priority here. The Polytechnic University has a different structure – that is why I did my first research at the Institute of Toxicology and went looking for a new place to do my PhD instead of staying at my alma mater. I wanted to create, seek, and build. At the Institute of Toxicology I only worked on pre-clinical research, which is experimental work – strict, entirely by protocol and very much uncreative.

I finally realized that I want to stay in science, I think, by the end of my Master’s studies. I felt that I like doing experiments, planning research, studying the “nanoworld”, being a pioneer. I love to see the results of my work, to read articles – I enjoy absolutely everything about scientific work.

What sort of research did you do at the Institute of Toxicology?

We studied nervous system damage markers in cases of acute poisoning by substances such as ethanol. And I’m not talking about cases where someone’s just had too much, but when people become comatose. We studied the biomaterial of animals and humans in such a state. This kind of severe poisoning has a very serious effect on the central nervous system. We looked for markers, i.e. changes in biochemical readings that might indicate further changes in the organism, serving as indicators of the severity of damage. Such research, theoretically, can be used to predict the patients’ future condition and prevent deterioration of their health by providing the necessary treatment in time.

What did you do when you first came to SCAMT?

My first tasks here involved assessing the toxicity of the compounds made by the lab’s chemists. Oftentimes scientists who review articles request that the authors add a note specifying the various compounds’ biocompatibility. I still do this kind of work today.

Besides that, by the time I came to SCAMT, the Lab had already applied for a grant from the Pharma 2020 federal targeted program, and everyone was awaiting results. The lab got the grant and I ended up on the project team.

Tell us about this project

It’s a pre-clinical trial of a magnetically controlled drug for treatment of thrombosis. It’s made up of a porous magnetite framework containing a thrombolytic agent (read more about this project here). We only conduct tests on animals, without human subjects. We modeled thrombi in animals, used the drug and observed how they dissolved, how well the drug would be absorbed, distributed and ejected from the organism. We also analyzed its safety. Its advantage is that it has a much smaller effective dosage as compared to other thrombolytics. The project is in its final stage now; the tests have shown it to be highly effective, and we will apply for a patent.

What are the difficulties in carrying out a pre-clinical trial?

It’s hard work, and if you’re doing it within the confines of just one institute, you have to set up an entire pre-clinical research center and employ all kinds of specialists. This is because you’ll need to analyze a great deal of data on the general toxicity as well as the specific types of toxicity. Oftentimes this kind of work is done in collaboration with other laboratories and organizations.

Yes, we collaborate with Dmitry Kolpashchikov’s group at the University of Central Florida, who are working on DNA nanobots. Dmitry also heads a team at our laboratory, which also works on DNA nanobots. One of the possible uses of these nanostructures is in treatment of oncologic diseases.

We call them nanobots, but actually these are specific sequences of nucleotides that can establish complementary connections to mRNA that code the so-called “house-keeping genes”. As a result, RNA is cleaved. Why is that important? It’s because without these mRNA the cell will no longer synthesize the proteins its life-support system requires; house-keeping genes are responsible for the doubling of DNA and synthesis of new RNA, from which proteins are made, etc. This technology’s unique feature is that, using specific markers, we ensure that its actions will have a narrow scope, meaning that these sequences will not connect to mRNA in healthy cells.

This can also be done by way of choosing a specific marker sequence of nucleotides that is specific only to cancer cells. Part of this project’s team – our Master’s students under Dmitry’s supervision – are working in vitro, i.e. they mix mRNA sequences with the nanobots and see if the cleavage occurs. As for me, I test the resulting DNA nanobots on human cancer cells. For the most part, these are cervical cancer cells and neuroblastoma (a tumor of the sympathic nervous system) cells. In our work we also collaborate with the Research Institute of Influenza, as they have a great variety of equipment at their disposal.

What other research are you planning to do?

Right now, I want to keep studying the chemical compounds we’re planning to use for therapy and diagnostics of cancer cell containment in organisms. This will be a project that will require the joint effort of chemists who will synthesize compounds with the necessary properties, physicists who will study the compounds’ capabilities as radiosensitizers (materials that increase cells’ sensitivity to ionizing radiation) and biologists who will evaluate the compounds’ biological activity.

How do you manage to work on several projects at once? Is there a strategy to it?

When I first started work at ITMO University, I had no experience with molecular and cellular biology, so I was helped a lot. Of course, I have to work a lot. I wouldn’t say that I know some kind of a time-management secret. It’s just that at some point you give top priority to whatever is most important now, but once a deadline starts to loom for some other projects, you have to channel all your efforts towards it. Still, I manage to get everything done that I’ve planned. Theoretically, I could do more – and I always want to do more: experiment more, examine more, and study my colleagues’ ideas. Besides, it’s a fascinating area of science which also has the power to cure diseases that are incurable today, so I feel that I’m working on something big.

Still, despite my enthusiasm, fatigue still takes me over. That’s why it’s important to have other interests besides science. I try not to miss volleyball training in the evenings, and on the weekends I learn to play the piano; I also snowboard.

Do you like working at the junction of different sciences?

Of course I do; it’s the future of science. SCAMT provides great opportunities to do just that, as you’ve got chemists and biologists working side-by-side in the same lab. They also often invite specialists from other organizations to talk about their work, which constantly places you in an interdisciplinary environment where you always learn something new, learn to understand your colleagues in different fields, which is needed to plan joint research.

In the year and a half that you’ve spent at SCAMT, what has changed here that you think helps the lab develop dynamically?

A lot has changed. When I came here, the laboratory was still being established; the cultural chamber for cellular biology research was only being constructed. The Biochemistry Cluster only had 8 or 9 Master’s students. And yet I was already sure that everything would be in order very soon – and I was right. There are a lot of scientists working here right now, with several groups of Master’s students in different fields. Staff and students here are always applying for grants and trying to do relevant scientific work.

Do you still want to work in the industry? Or is it possible to develop medical products in a university?

No, I don’t. The industry usually works to create products that have already been made, there’s no science in it, no creativity. In my mind, working on pharmaceutical production is routine, protocol-driven work. At a university, however, we can advance science, come up with new ideas and test them. If the idea is good, you can get funding for more in-depth research; at some point, perhaps, find an industrial partner. In any case, I believe that science and industry are different; some would prefer the former and some – the latter.