All About ITMO Researchers’ Latest Advances in Wireless Power Transfer

Wireless power transfer technologies have been present on the market for several years now in the form of charging devices for smartphones and toothbrushes. But they are far from perfect: the capacities are lower than in analogous devices and the efficiency depends on the device’s ability to properly sync with the charger. Today, we’ll be looking into ways to reduce energy losses in WPT devices and what the staff of ITMO’s Faculty of Physics have accomplished in this field. 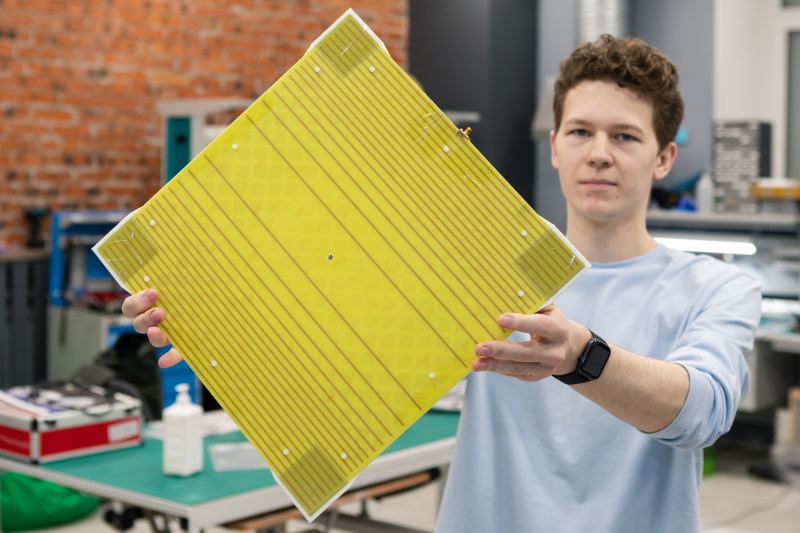 This metasurface-based resonator developed at ITMO consistes of two layers of printed conductors situated perpendicular to each other. Photo by Dmitry Grigoryev / ITMO.NEWS

Wireless power transfer (WPT) technologies are used to charge all kinds of devices: smartphones, laptops, toothbrushes, and even electric cars, all without requiring any physical contact with the energy source. In such systems, there are two types of loss depending on whether it’s caused by the charging station’s material or by radiation.

That is why experts in optics and nanophotonics are especially interested in nonradiating energy sources, which don’t emit energy in the far field and ensure its prompt capture in the near field. At the foundation of such devices are particles in the anapole state that are “invisible” to electromagnetic waves.

Last year, a study conducted by researchers from ITMO’s Faculty of Physics in collaboration with their colleagues from China, Germany, and Australia involved an attempt to eliminate radiation losses in the transmitter and the receiver in order to boost the efficiency of WPT. The system proposed by the scientists makes it possible to transfer power without it dissipating into the surroundings. In this case, the hybrid anapole state is created by a destructive interference of fields generated by various parts of the source. It is this overlap of fields that succeeds in “dampening” radiation.

“My colleagues and I assumed that using nonradiating sources in a near-field WPT system would enhance its efficiency since the energy would not be lost as radiation. First, we studied a nonradiating source based on a hybrid anapole state with total radiation suppression. Then, we experimentally investigated and demonstrated an efficient WPT system based on the proposed nonradiating sources,” says Esmaeel Zanganeh, a co-author of the article and a PhD student at the Faculty of Physics.

First, the scientists conducted theoretical and numerical studies of the proposed device; then, they produced a prototype to confirm their findings. Experiments showed that a WPT system composed of two nonradiating sources (a transmitter and a receiver) can achieve an efficiency of 92%. This result exceeds the maximum output efficiency of analogous devices.

In the case of nonradiating sources, a transmitter can only charge one device at a time, which is far from the most accommodating solution. However, other WPT systems allow multiple devices to be charged simultaneously. A key factor related to this issue is the uniformity of the magnetic field created by the transmitter. It ensures a constant power transfer efficiency regardless of location. This makes WPT systems easier to use and provides more freedom to their users. But devices currently available on the market are unable to do that.

“The magnetic field is created by currents that flow within the conductors that make up our resonator. Therefore, by controlling the distribution of these currents we can control the distribution of the magnetic field. We’ve also been able to improve the field’s uniformity by not using a resonator that’s completely filled with a dielectric, which is something we’ve used in previous prototypes. This time, we’ve only filled it partway through with a dielectric that has high permittivity,” explains Pavel Smirnov, the lead author of the article and a PhD student at the Faculty of Physics.

Pavel’s research team has worked for several years on a system dubbed the “smart table.” It uses a metasurface-based resonator as the transmitterto provide simultaneous charging to multiple devices. With each year, the scientists get closer to creating an actual market-ready product.

Since the electromagnetic properties of metasurfaces can be adjusted on the meta-atom level, the use of metasurfaces allows for better flexibility when managing the distribution of magnetic and electrical fields as compared to conventional flat induction coils which are used in WPT devices today. Metasurfaces can increase the effectiveness, safety, and operational distance of such systems.

“With previous versions of the transmitter, we used a resonator made with crossed wires submerged into water, which is a material with high dielectric permittivity that allowed us to lower the resonator’s operational frequency. Such a structure is difficult to produce and isn’t too practical, so right now we’re using a solid dielectric – ceramic composite materials, which have solved several issues at once. First of all, such materials make the transmitter more compact and practical. Secondly, having optimized the size of these ceramic inserts and their permittivity, we can more accurately tune their operating frequency,” says Pavel Smirnov.

One particular source of danger in WPT systems is the strong electromagnetic radiation created by their transmitters: it has a thermal effect on all biological objects and, should they be situated too closely, can overheat organic tissue. In their research, scientists from ITMO have reduced its thermal effect by 30 times as compared to a regular induction coil. This means that it is now possible to safely transmit 30 times more energy.

“Perhaps this specific “smart table” design wouldn’t be suitable for mass production, as the ceramic material we use is quite expensive. But right now, our team is working on charging stations based on a different metasurface that’s easier to use. We’ve already employed it in a couple of low-consumption devices. When this project is completed, we’ll focus on increasing the amount of power used. I believe that within the next couple of years we’ll be able to charge phones and begin to commercialize our findings,” comments Pavel Smirnov.