Scientists from ITMO University have developed a prototype of a metasurface-based device that can be placed or embedded in a table in order to provide wireless charge to several gadgets at once. This “smart table” can wirelessly transmit energy without significant losses over the distance of a meter, which is hundreds of times more than the limit of existing wireless chargers. The researchers experimentally tested the device’s performance and described the physics behind it. The study was published in Physics Review Applied. 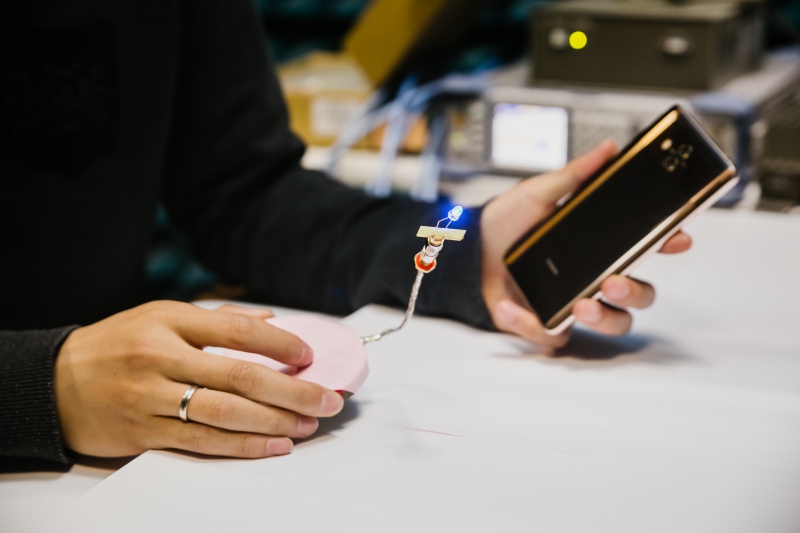 Metasurfaces are a new class of artificial planar materials with unusual properties that cannot be found in nature. For example, a special arrangement of their unit cells, which are usually smaller than the wavelength, supports the propagation of electromagnetic waves over long distances. Scientists used this exact feature to create a new type of wireless charging platform: the “smart table”. The device is, in essence, a rug that can be draped over the table or embedded into it in order to charge nearby devices.

In their study, scientists from ITMO University described the concept of their new device and experimentally tested its performance. The experiments were carried out in the radio frequency range using a special device that analyzes the efficiency of energy transfer over distance. The results showed that the metasurface can transfer 80% of all energy over the distance of one meter. This is much more efficient than the wireless chargers found on today’s market: their distance limit is only a few millimeters. Such results were achieved thanks to the metasurface’s support of wave propagation, through which the energy is transmitted with negligible losses.

“We began exploring wireless power transmission about 4 years ago. Since then, we have developed metamaterial-based transmitters and energy receivers, and have done a lot to improve the efficiency of energy transfer. Our biggest challenge was to figure out the physics behind this process. Our smart table consists of a transmitter, a receiver, and a metasurface. The interaction between these resonant objects is not obvious. We were only able to employ these unique properties once we understood the physics behind them,” says Mingzhao Song, a researcher at ITMO University’s International Research Center for Nanophotonics and Metamaterials.

According to the researchers, the prototype still requires improvement. For example, the metasurface is currently very sensitive to deviations in the location of the transmitter and receiver. Further research should ensure the ability to charge devices from any position and charge multiple devices simultaneously. This further research may take about a year.