How Russian and French Researchers are Helping to Restore Classic Art

Terahertz radiation is a type of electromagnetic radiation located within the frequency spectrum between infrared and radio. It passes well through a variety of materials and is harmless to humans, which opens up a wide range of its possible applications. Researchers at ITMO University are actively working on this subject in collaboration with their French colleagues. Together, the scientists are developing a pulsed terahertz spectrometer for application in the analysis and restoration of artworks. Read more about the project and how terahertz technology lets scientists explore art in the article below. 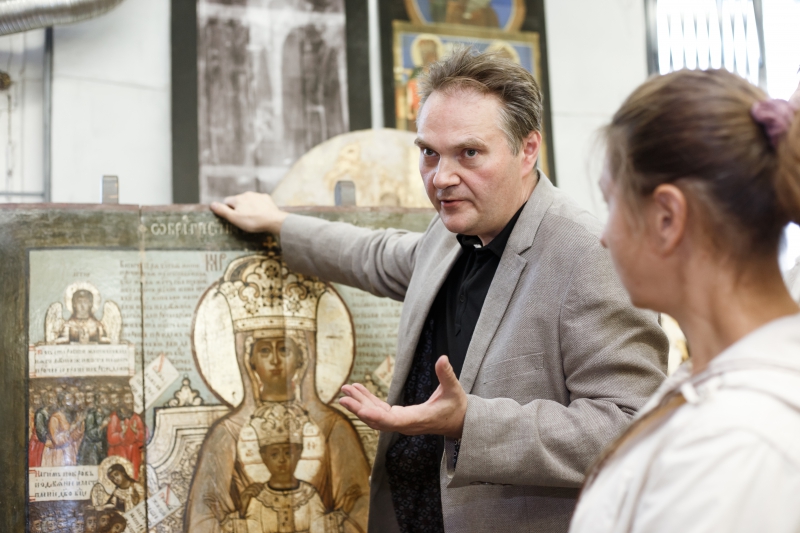 Researchers at ITMO University are working on methods and devices based on terahertz radiation with applications in biomedical diagnostics, quality control of food products, and art studies. One such group works at the University’s International Institute “Photonics and Optical Information Technology.”

The Institute is made up of several international laboratories, including the laboratories of Digital and Display Holography and Femtosecond Optics and Femtotechnologies. That is where the Femtomedicine research team works, headed by Olga Smolyanskaya, a research associate at ITMO’s Faculty of Photonics and Optical Information. The team collaborates with a number of research centers and organizations, including the Almazov National Medical Research Centre, the N.N. Petrov National Medical Research Center of Oncology, the "Biotechnologies of the Third Millennium" Research Center, and the St. Petersburg State Institute of Culture.

The team also works with some of Russia’s leading terahertz laboratories; in 2017, the researchers were awarded a Russian Foundation for Basic Research (RFBR) grant for a project conducted with the terahertz labs of Lomonosov Moscow State University, Tomsk State University, and the Institute for Physics of Microstructures. The project is headed by leading Russian expert on terahertz technology Alexander Shkurinov and aims to use THz radiation in the detection of symptoms of socially significant diseases.

As Dr. Smolyanskaya explains, broadband terahertz radiation that has passed through or been reflected off an object carries a large amount of information about the object’s inner structure and spectral properties. This method is the perfect contract-free, non-ionizing, safe technology of non-destructive control.

The biggest advantage of the terahertz analysis methods that are currently in development is their ability to conduct a range of studies in just one scanning pass: from qualitative or quantitative detection of potentially harmful components to the tomographic visualization of undesirable objects.

“Using THz radiation to determine the safety of objects lets us do it quicker while reducing expenses. These technologies would allow us to increase the number of test samples of food products by tens or hundreds of times or to ensure a constant, non-disruptive control of each package unit in an industrial setting. This can be used in manufacturing, customs, in flaw detection of paintings, as well as during lab diagnostics of socially significant diseases,” says Olga Smolyanskaya.

For several years now researchers at ITMO University have been working with the staff of the IMS Laboratory in Bordeaux, France. Their first collaboration was a study of the THz-frequency optical properties of in vitro blood plasma taken from lab animals with Ehrlich ascites carcinoma. Using the results of their study, they developed a software suite capable of quantitatively modeling biological samples with complex structures and calculating the parameters of EM-waves in the THz frequency range reflected off of these phantoms. Since then, the two labs have greatly expanded the scope of their shared research interests.

“I can now say with confidence that THz technologies are at the peak of their popularity and my research team is working on a new, international level. In 2018, we won a Russian-French grant supported by the Russian Foundation for Basic Research and CNRS, and our French colleagues are helping us find new prospects of research in this field,” says Olga Smolyanskaya.

As part of a joint grant between RFBR and the French government, ITMO University and University of Bordeaux are planning to compile a database of electrodynamic properties of biosimilar components, develop prototype copies of portable THz diagnostics devices, and develop the corresponding software.

At ITMO University’s Femtomedicine Laboratory, researchers from ITMO and IMS Bordeaux are working on new THz devices and systems for flaw detection in paintings. The State Hermitage Museum, Russian Museum, Russian Academy of Arts, and the St. Petersburg State Institute of Culture have already expressed their interest in the project.

"Our collaboration with ITMO University is very interesting because our teams have spent many years working in the field of terahertz technology and their approaches and expertise complement each other. It helps us work together effectively," says Jean-Paul Guillet, an associate professor at IMS Bordeaux. "Following our organizations' joint work on projects in the fields of biomedicine, visualization, and holography, we are now focusing on finding applications for these technologies in art preservation. We've demonstrated that we are able to analyze paintings by studying each layer of the painting as well as identifying the structural defects that need to be fixed as part of restoration efforts."

According to Tatiana Shlykova, an associate professor at the St. Petersburg State Institute of Culture’s department of restoration and evaluation, the specialists involved in the preservation of cultural heritage objects are chiefly interested in THz analysis due to the opportunities it offers that cannot be achieved with other methods.

Don Arnone, the CEO of TeraView LTD. (Cambridge, UK), confirms her words. He notes that terahertz radiation allows researchers to see through the materials used in painting and acquire insight into their chemical make-up.Terahertz sensors, which specialists use to inspect paintings, are based on various technologies. Today, the most efficient analysis method is based on the use of easily accessible (ready-made) visible-light lasers in combination with semiconductor technology. This method is also useful in the creation of three-dimensional images that are used to study the many layers of a painting.

Advantages over other methods

Many traditional methods, says Jean-Paul Guillet that have been used to analyze and authenticate artwork for decades involve the removal of fragments from paintings or their chemical analysis, which destroys some of the material. The use of terahertz technology, however, eliminates any harm to the paintings. In addition, unlike ultrasound analysis, which requires sensors to be attached to the artwork, the terahertz method involves no physical contact with the object in question.

Due to their low power usage, THz technologies pose no danger of overheating, and, unlike X-ray tests, are not harmful to humans. Finally, they are simple to use.