ITMO graduate Anton Zaytsev who is currently doing a PhD program at the University’s Faculty of Photonics and Optical Information has become one of the six people to receive a scholarship from the IEEE Microwave Theory and Techniques Society for implementing the project “Development of optically tunable graphene-based THz devices”. ITMO.NEWS spoke to Anton to learn how terahertz radiation can replace the X-ray, why he and his colleagues are looking for a replacement for single-layer graphene, and what is to be considered when applying for an international grant. 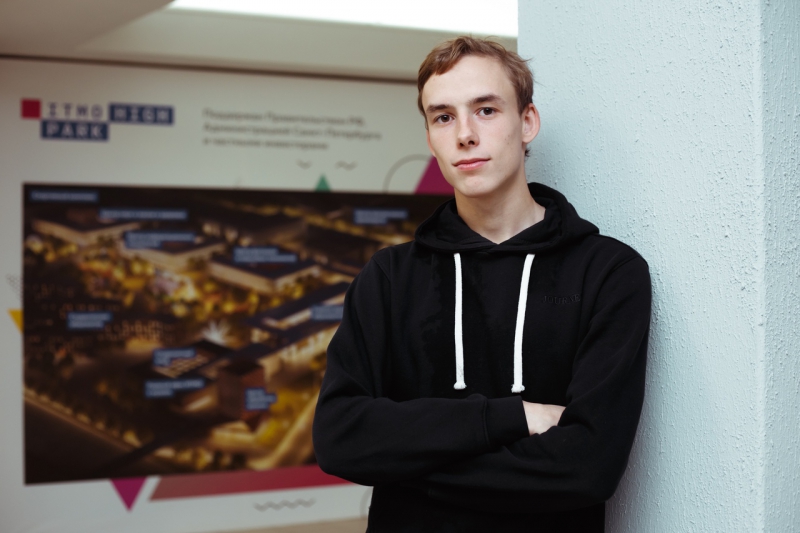 The international MTT-S Undergraduate Scholarship (IEEE) is given every half a year to students who focus on studying microwave and terahertz radiation, and Anton Zaytsev has become one of them. Although the scholarship was awarded some time ago, it was officially announced just before the start of the new academic year.

Anton has become the third young scientist from ITMO to receive this scholarship in the past year and a half. The two other students are also members of the Terahertz Biomedicine Laboratory headed by Mikhail Khodzitskiy. According to Anton, getting the scholarship offers not just financial support for a young researcher but also an opportunity to attend international conferences and participate in inter-university programs.

First of all, we’d like to congratulate you on the official announcement of the scholarship award. Anton, do you remember how you felt when you learned that you won the competition?

It all happened just a day before my birthday, so it felt somewhat like a gift, and a really pleasant one: before that, I had never won any international scholarships. Apart from the scholarship (which is about 1500 USD), they also allocate money for going to a conference this year, and give membership in the Microwave Theory and Techniques Society. And that is an approval of my research’s relevance, which offers an opportunity for future development, as such awards will be considered in future competitions, be it for scholarships or for grants.

Before me, it was Maksim Masukov who won this scholarship, we work together in the same laboratory, and after me, it was awarded to another one of my colleagues, Egor Litvinov. This is quite an interesting result from the standpoint of the evaluation of our laboratory’s work, as this scholarship is very rare and is given to only a few people, while we have three winners in a row.

I plan to spend part of the money on going to a major conference that will take place in Paris on September 20 - October 4. This is the so-called European Microwave Week that features several conferences (including the 49th European Microwave Conference (EuMC) that I plan to attend) and workshops in our field of focus.

Tell us about your work. What is it that you and your colleagues do at the Terahertz Biomedicine Laboratory?

One of our research interests has to do with developing a device for controlling the parameters of terahertz radiation, for purposes including the development of wireless communication devices that will be faster than Wi-Fi. For now, we focus on studying new materials that can be used in this regard. My work that allowed me to win the IEEE scholarship was on a device for modulating the parameters of terahertz radiation based on multilayer graphene.

To put it simply, we have a source, a laser or diode, of continuous radiation; in order to use it to transfer information, we modulate this radiation in amplitude, phase, intensity or frequency. We can do that with the help of graphene and graphene-based metamaterials that offer a greater efficiency of the transmitter. As a result, we get a modulated signal on the receiving side that we recognize and decode for useful information.

When using graphene-based materials, we get interesting results. But we never stop looking for materials that can do even better. We can’t stop on one single option, so now, we have started working on a new material that our laboratory has won a Russian Science Foundation grant for: bismuth antimony. Graphene is very thin, as it has a monatomic structure, and can be easily destroyed. By using multilayered graphene, we increase its efficiency in what has to do with interacting with radiation, but increase losses, as well: graphene absorbs radiation to a considerable degree. One of the benefits of using bismuth antimony alloys is that their properties in the terahertz band largely depend on the composition of the alloy and the film’s thickness. What’s more, their unique properties can be controlled using various external influences (optical excitation, heat, electric and magnetic fields).

And what is your role in the research that you’ve talked about?

My colleagues study various materials with the help of an impulse terahertz spectroscopy unit, and my task is to process the experiments’ data and do a series of electromagnetic modelings with it. Then, I use my results to study the properties of the devices that we plan to develop. This way, I get preliminary data that can be used to assess whether we should make an experimental device. My assessment shows whether we can get particular effects when using this or other material.

In fact, the work I do is a lot more diverse: it also includes conducting analytical reviews and various calculations, creative work on searching for new solutions, as well as writing articles and participating in conferences. Some of that can well be just a stepping stone: you don’t necessarily have to like everything that you do. Still, this is something you have to learn in order to pass on to further stages, hopefully more complex and interesting. I’ve recently started a PhD program in radiophysics, so I believe that I will soon start to use radiophysics methods for working with our materials.

How long does it take to develop a new material from scratch?

It takes a year to comprehensively study a material’s parameters and do the essential modeling, and the next year can well be spent on developing and creating devices, as well as optimizing their parameters for the new material.

You said that terahertz radiation can be used for ultrafast data transmission. What are the other applications of your research?

The materials that we study can also be possibly applied in visualization systems in the terahertz range. Let’s say we take a source of terahertz radiation; its waves distribute across cells (or act as sources), then propagate parallel to one another and pass through a material. Then, the radiation is absorbed by a matrix of detectors, and we get an image, but in a terahertz rather than an optical spectral band. This happens because terahertz radiation is absorbed differently by different materials, for example human tissue and metals.

So you say that this can become an alternative to X-ray?

Yes, and a more safe one at that. X-Ray ionizes biological molecules, which can destroy them. Everyone knows that continuous radiation does no good to a human being. Terahertz radiation is not ionizing, and the energy of its quanta is not enough to destroy molecules. They just start to oscillate at a greater speed, and get heated a bit - or at least this is what we’ve concluded from our results.

Your work on terahertz radiation got you the IEEE scholarship; thanks to it, you are also one of the best graduates and are now doing a PhD program. Why did you decide to focus on this topic?

I’ve tried several different fields in the course of my education, but my attempts were mostly futile. Then, I came to the Terahertz Biomedicine Laboratory that focuses on various applications of terahertz radiation. This is a very interesting and promising field that can give many results if we work consistently and study the materials properties of which we still don’t know.

What are your plans for when you complete your PhD program? Do you plan to stay in fundamental science or maybe launch your own startup?

I want to create a device that would be both useful and unique, and maybe launch a production. Naturally, it has to be better than its existing counterparts. It doesn’t matter what this device would be, maybe it should be a multipurpose one. I plan to spend some time of my PhD program on searching for a field that calls for the development of new devices. This is the hardest part: to find a field where your inventions can be of use to people, where there is a lack of technology which can be compensated by using new approaches.

Getting back to your grant, what advice can you give to those who are only going to apply for scholarships or grant competitions?

The relevance of your work is important, you also need to look for places to send your application to, and also know the proper ways of doing that. What’s more, you need support from your research advisors, in what has to do with both recommendations and your research and activities in general. Apart from a project’s relevance, it’s the number of author’s publications that is often assessed. Luck is also important to a particular degree, as not everything depends on the applicant.

I think that there shouldn’t be any problems with filing applications, as it is much simpler than it seems. If you need to attach a review or a motivational letter, it can usually be written in any format. In most cases, it is the quality of work that is being assessed, not its execution. Still, sometimes the format is also of importance, and you should consider this, as well.

We once applied for a small grant of the Russian Foundation for Basic Research with me as a head, and their evaluation of our work was quite high, but they noted that I had only two or three publications, which was not enough. So we didn’t get this grant.