FOYT Knows How to Make Your Digestive Organs Happy

The pace of life in the 21st century is becoming faster and faster. We almost have no time for sleeping, staying with our family and friends and even for eating. The developers of FOYT project believe that their cocktails are a "must have" for those who are always in hurry. The startupers don’t guarantee to solve all problems of busy people, but they believe that FOYT can prevent you from serious diseases caused by an unhealthy diet. 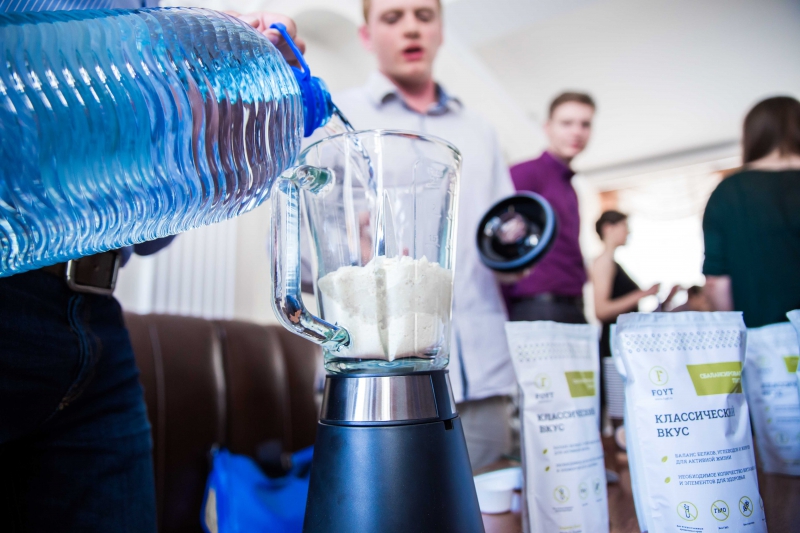 Eating habits are not a joke! According to the statistics, improper eating is one of the main causes of death in Russia. Apart from that, fast food makes you fatter. To solve this problem, Artyom Lepeshkin, graduate student at the Faculty of Food Biotechnologies and Engineering, developed organic cocktails that one can eat on the go.

From an idea to the real project

Artyom has loved chemistry since he was a child. He became a food engineer by chance. When he chose a major at university, he was offered biotechnologies, as it was a new discipline which hadn’t become popular yet. Fortunately, students received an opportunity to use modern labs and equipment. Artyom with his striving for hands-on experience was happy to use these facilities to make experiments and conduct research.

He came up with the idea of healthy cocktails in September 2015 when he was a Master’s student. He decided what ingredients he would use, but the project was far from being full-fledged. His joining the Future Technologies business accelerator was a very important moment, as the entrepreneur met his mentor Alexey Lisunkin. The business angel mentioned Artyom’s project at one of his pitch sessions. Before this life-changing meeting Alexey didn’t plan to invest in a startup. The successful businessman used to work with predictable and stable projects. However his friend offered him to visit a pitch session at the Future Technologies, and this changed his career.

Before visiting the session Alexey heard about Soylent, which was the main business rival of FOYT. He was excited about the idea of using instant cocktails that provide daily nutritional requirements instead of traditional food. That is why he appreciated the presentation by a young bioengineer who talked about an organic counterpart of Soylent.

When Artyom and Alexey met, FOYT had been already tested in ITMO’s modern labs, had taken part in alpha testing at the Future Technologies, but it still was far from being perfect. The idea to use only organic ingredients made it more complicated. Firstly, natural components are more expensive than inorganic substitutes. Secondly, some of them are not produced in Russia — that is why one needs to wait, as delivery takes weeks. (for example, FOYT orders chia seeds from Peru). Apart from that when using only organic components it is very difficult to produce as tasty product as ones with flavouring agents. That made it very challenging to produce natural cocktails.

After lots of trials and errors Artyom and Alexey started to present the product to clients to receive their feedback. FOYT became popular after taking part in Geek Picnic. It took only two days to sell over 500 cocktails. Despite many difficulties this success was a wonderful driver for further development. The main feature of FOYT is that it is eco-friendly. In spite of all challenges Artyom took a firm stand.

"Our main principle is "don't harm!" We guarantee that our product is harmless to health and environment," comments Artyom Lepeshkin.

Currently one cocktail costs 150 rub. It is a little bit cheaper than a typical business lunch. After drinking it one forgets about hunger for 3−4 hours. Now Artyom is working on various tastes.

"FOYT is a wonderful solution for those who have a tight schedule and care about their health," says Artyom Lepeshkin. The entrepreneurs thought that the main consumers of FOYT would be people working in offices. However it turned out that they were not interested in shortening their lunch time, as lunch for them is a wonderful opportunity to talk to colleagues and have a change of pace. Such cocktails are appropriate for those who constantly move and have no stable day plan.

Artyom and Alexey don’t use such popular promotion strategies as multi-level marketing like Energy Diet and Herbalife did. Due to the fact that this way may seem controversial, they promote their cocktails through their online store, and by presenting the product at sport clubs, public events that gather people interested in a healthy lifestyle. The entrepreneurs also plan to develop cocktails for vegans.