Last Friday, the participants of the three-day TeeninTech intensive course presented their graduation projects to an expert jury. Teen in Tech is a technological entrepreneurship school for teenagers organized by ITMO's Center for the Promotion of Youth Innovation and Technological Entrepreneurship and Project Management and Innovation Department. ITMO.NEWS learned about the projects the young developers have been working on. 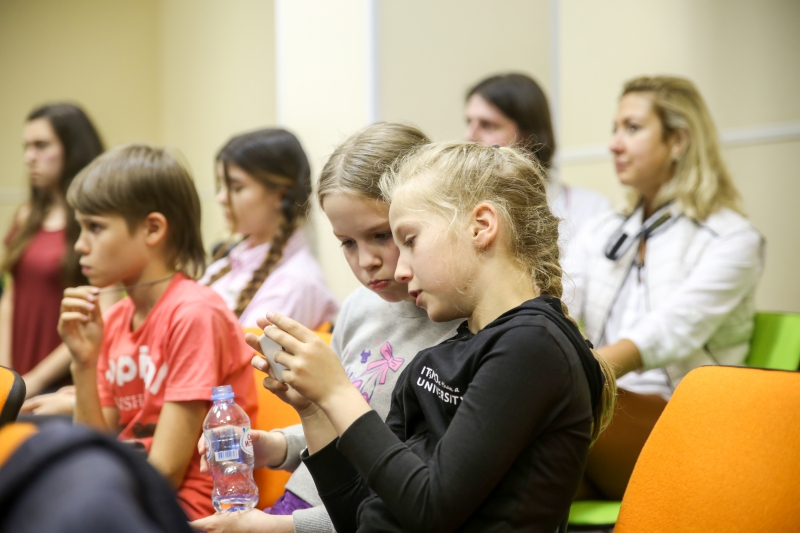 Dmitry Patyk's project focused on creating a Minecraft server called UranusMine, a unique Russian platform hosting a great amount of games. According to Dmitry, there are to be special modifications on the server so as to attract the users. The clients will also have the opportunity to purchase different priviledges. While working on his idea, Dmitry focused on the target group of Russian-speaking Minecraft players aged from 5 to 25. Overall, there are about 50 million Minecraft players in the world, 3,25 million of them live in Russia and 3,8 million Russian-speaking Minecraft players live in other counties. As of now, Dmitry is finalizing the server, adjusting the plug-ins and looking for a hosting.

Vladislav Korchagin, Kirill Sapriga and Arthur Smirnov devised a project for recognizing foods and their recipes; they compare it to the Shazam app that allows users to recognize musical tracks. The new server is to be used by tourists, gourmands and just everyone who likes food. The app will store recipes from all over the world, as well as recipes from popular games and books,and work as follows: the user photographs the food with his smartphone and sends the image to the server; then, a neural network recognizes it and sends back its recipe, as well as energy value and other properties. The user will also get information on places where he can buy it - similar to how services like Yandex.Market works. The young developers do not limit their project to Russian-speaking users only and are planning to integrate their technology in Instagram. The project by Taisia Rybakova and Anastasia Patalah will help people order food products and get them where and when it's most comfortable for them: while having a stroll in the park or in their own backyard. Now, many people don't have time to go to shops, so they make use of special internet services that deliver food to their homes. The students propose an alternative: the productduct - a big cylinder with a window from where people would get their food. The cylinder is to be delivered by a drone.

"There already is a refuse duct, now we'll have a productduct. This way, we'll help deliverymen and make people happier: all they'd have to do is make an order and wait for the drone to deliver it!" explain Taisia and Anastasia.

Daniil Egorov presented the idea of a hybrid car made of cheap, but reliable materials that even a student will be able to afford. That would be the way to solve the problem of students not having enough money to buy a car. What is more, the new car will be highly ecological, have a unique look and be really comfortable. The materials used to produce it (carbon fiber, for instance) will allow to decrease the costs. This team's members, Alexander Tulpanov and Daniil Nechaev, offer to solve the problem of the presently used manipulators being uncomfortable by using a 3D sensor and a manipulator that is similar to a human hand. Many research institutions and industrial facilities now use hot chambers. Hot chambers are boxes wherein manipulators are used to work with hazardous materials. As of now, most manipulators are operated with a set of joysticks, which is really uncomfortable, as one has to get used to them. Also, there are problems with the grip, as one has to change fittings to grab objects of different sizes. Yet, if one could use a humanlike hand, grabbing any object would be of no problem.

"We've decided to alter the manipulator, and now it’s totally anthropomorphic - it copies a human hand. We've also changed the control method: instead of joysticks and buttons, we proposed using a 3D sensor. As of now, we already have a working prototype," shares Alexander Tulpanov.

To control the manipulator, one has to just place their arm into the 3D sensor's area of effect, and the manipulator will start copying its movements. The initial price of the device will be $500 for the basic model; the developers add that they a planning to produce both standard and custom manipulators.

The project's idea is to create a web-service for school students who train for the General State and Unified State Exams. Ivan Kuznetsov, Alexander Dmitriev and Igor Tyapichev propose an alternative to common cramming.

"School students spend a lot of time cramming, and textbooks are not always the best method to learning a subject, so we want to gamify the process: the student will learn the basics of different subjects in the environment of his favorite game, together with its characters," explain the students. As of now, they already have the website's prototype, and are now researching games popular amongst students. There will be game currencies in the games (for instance, gold in games adapted from Warcraft); to get to the next location, the player will have to earn gold by solving tasks. If one would want to go to the next stage faster, there will also be an option to buy game currency with real money. 10th grader Kristina Mihailovna proposed a technology which, she believes, can make a revolution in energetics. She is working on an armlet that can transform the heat of the human body into energy. Such device is aimed at a wide audience, as everyone now can experience the problem of their devices running low on power. The armlet will be able to charge any portable device that the user carries around. It will also be possible to apply Kristina's technology to common armlets or watch straps. The student wants to use silicon - a cheap and safe material - for the armlets' main functional components; what is more, the nanowires she plans to use will greatly increase the armlet’s efficiency. As of now, she is working on the device's prototype. In future, she also plans to add software to her device.

According to the statistics, 80% of customers who buy goods from Internet shops describe it as a negative experience. The project’s idea is to make the process of buying clothing online easier. As of now, when one buys clothing on the Internet, they mostly don't have the opportunity to try them on before paying for them. Internet shops solve the problem as follows: they deliver several items for the client to choose from them. If the client doesn't like any at all, they still have to pay for the delivery. The team's members propose a solution - virtual dressing-rooms. The program will create a 3D model according to the data the user inputs, including such things as skin tone and hair color. A team from the Vzmakh private school presented the Business Games 2.0 project which is already used in their school since 1993. The business game copies the model of a real market: all the participants are in equal conditions and achieve results by communicating with each other, signing agreements, receiving patents and the like. The game helps to understand how registration offices, banks, tax offices, consumers, etc. operate. The game helps school students and even grown-ups understand their strong points, learn to quickly react to the situation and understand whether entrepreneurship is what they can do for a living.

Following the results of the project contest, RemoteHide became the winner: now, its team has become a resident of the FutureTechnologies accelerator. Kristina Mikhailova and her charger armlet got 2nd place - the prize was the opportunity to participate in the girls4tech accelerator program for women which starts on June 30. The ones to get 3rd place were the team of the Productduct project, and Dmitry Patyk and his Minecraft server got the audience award.