Over 2,400 students started their Bachelor’s studies at ITMO this year. Among them is Petr Gumennik, a Russian ice skater and bronze medalist at the World Junior Figure Skating Championship. He joined ITMO University to study computer science and technologies but his dreams go beyond that: he wants to study bioinformatics and help create more efficient medication for the treatment of genetic diseases. 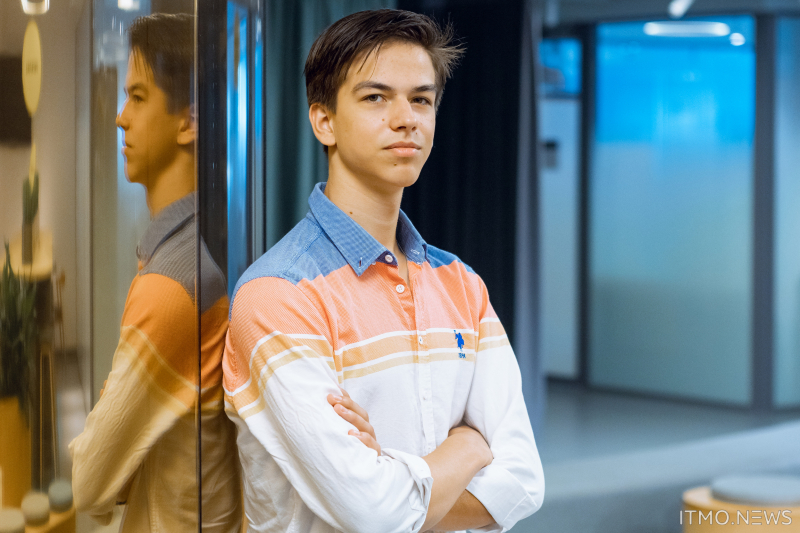 You originally chose chemistry and biology as your main fields of study during school, and then this year you also added computer science? Why?

I’ve always liked medicine but when I looked into it, I realized I’ll have to study it for 6-7 years, which would be hard to combine with ice skating. Plus I didn’t quite like the curricula.

I started to consider other fields and computer science was among them. I liked what I saw in terms of the problems and assessments and decided to focus on this field to become a programmer. After passing the exam I started to look into it further to understand the difference between the subfields. It’s not 100% clear to me yet, but I think I’ll make sense of it while studying.

Computer science suits me cause I like solving logical and mathematical tasks. I had to miss a lot of classes at school because of my figure skating training and didn’t really study this subject thoroughly before this year, when I realized this is what I really like. I prepared for the Unified State Exam (USE) in four months and scored 100%.

What helped you get a perfect result?

Experience, I guess. Computer science is the seventh Unified State Exam I’ve taken. In the first year, I passed Russian, math, chemistry, and biology, in the second year – math and biology once more to gain more points, and now computer science. I was absolutely relaxed and knew how to prepare and manage time.

Figure skaters often study at universities that specialize in physical education and sports, but you chose ITMO. Why so?

It wouldn’t be hard for me as a professional ice skater to study at, say, Lesgaft National State University of Physical Education, Sport and Health. Perhaps, I’ll apply there next year as well and will combine my studies. By entering a non-sports university, I hope to avoid possible risks. For example, Russian athletes can’t participate in international tournaments right now. Great local alternatives appear, but I’m afraid ice skating can become less prestigious over time and there’ll be fewer young sports enthusiasts to train.

I couldn’t enter a Moscow-based university because my sports club and my trainer are in St. Petersburg. I also considered applying to St. Petersburg State University and the Higher School of Economics, but I liked ITMO most. I realized that athletes are treated well here. I’ve received ten extra points for participating in the European Youth Olympic Festival and the university staff contacted me to talk about ITMO and help me with my application.

Why did you choose Computer Systems and Technologies?

I want to do bioinformatics – I’m interested in genetic modifications and treatment of genetic disorders. Medications that are available now are either too expensive or have too many side effects. I’d like to improve them.

I decided that it would be best for me to study at an IT university rather than a medical one. It’s easier for me, as computer science is more universal. If I change my mind about bioinformatics, I’ll have lots of other options. For example, software development.

What are your plans at ITMO?

For now, I’d like to focus on studying. In addition, I’ll have to attend training sessions, which won’t be easy, as it’s hard to combine different activities in the first two years of studying at my program. But I’ll try to make it work.

In the future, I’d like to complete a Master’s program, too, and expand my possibilities and skills in bioinformatics or something else. There’s a suitable program at ITMO called Bioinformatics and Systems Biology.

Do you see yourself as a trainer in the future, or would you like to focus on something else?

I hope that Russian ice skaters will have a chance to participate in the 2026 Winter Olympics. I think all athletes dream about participating in such a major tournament and I might achieve that: during the last Olympics, I was the first in reserve. I hope to grow in the next four years enough to join the main team.

However, as a professional ice skater, I’ll only be able to participate in competitions until I turn about 27 years old. After you turn 24, your physical development slows down and skating becomes harder. So I’ll have to start a new career. Perhaps as a trainer, but for now I’m more interested in computer science and bioinformatics.

I’m studying Java and learning how to code simple programs like a calculator or a music player. I also like doing sports like skateboarding, snowboarding, and cycling. Plus, I love to play piano – it helps me concentrate, relax, and get inspired. It’s like meditation or yoga for me.