On June 8, Moscow hosted the 10th annual university forum The Future of Higher Education organized by the agency RAEX Analytics. The event was attended by Vladimir Vasilyev, the Rector of ITMO University, who took part in a plenary discussion devoted to the changes in current geopolitical and economiс climate. Dr. Vasilyev stated that artificial intelligence is one of the key potential drivers of reform in education. 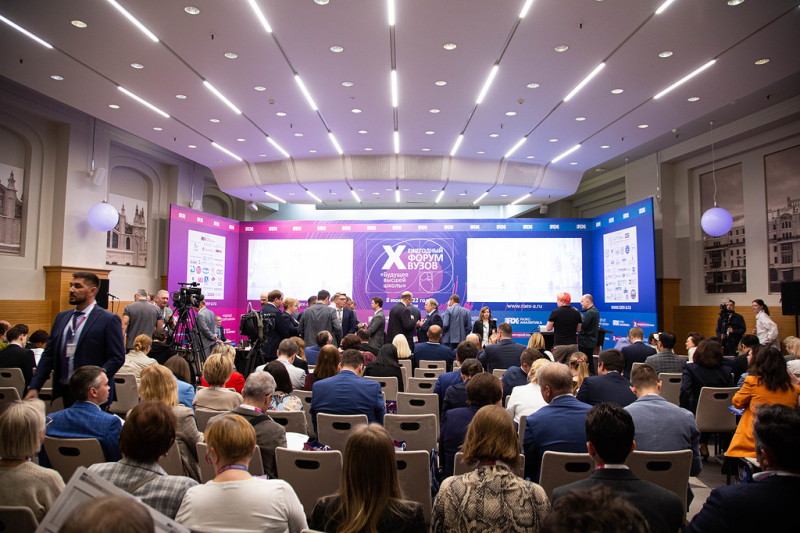 When discussing Russia’s recent distancing from the Bologna Process, Vladimir Vasilyev stressed that, contrary to popular belief, the globally recognized system is not only about the two levels of education (Bachelor’s and Master’s). This tiered approach was merely a means of implementing an educational system. And while some sectors (e.g. IT) have benefitted from this transformation, others, which do not change as rapidly, can make the most out of traditional approaches, namely, Specialist’s programs.

“The two-tiered nature is a means, not a goal. This education system works well for such fields as IT but not for those that don’t experience such a constant change of paradigms and training methods,” explains Vladimir Vasilyev, the Rector of ITMO University.

A potential replacement for the current education system would be the 2+2+2 format as already discussed by Russian authorities a few years ago. It would consist of two years of fundamental education followed by two years of specialized training and, finally, two years of extended learning, during which students can expand their skills, change their careers (if necessary), and thus graduate with a unique set of competencies that will help them succeed.

“The 2+2+2 structure, which has been brought up by the President, may become the heart of our new national education system yet the question is, what would it teach? This is the task for higher education institutions, which will analyze the markets they cooperate with. When looking for new solutions, we can’t go over the same ground, we have to be creative and not be afraid to make mistakes,” says Vladimir Vasilyev.

Meanwhile, higher education has been transforming not only in Russia but also globally due to the pandemic, which has accelerated change in the market. Today is the day for Russian universities and EdTech companies to join their forces and build a new education system. However, all educational and technological changes should come from a strong foundation, that is, the formation of critical, system, and other types of thinking in students.

Another global trend is personalized learning, which allows students to create their own individual learning tracks. Similar tendencies are observed in medicine, which gradually moves towards strictly evidence-based approaches. The same should be applied to education. One of the ways to achieve this is through artificial intelligence. Vladimir Vasilyev believes that by 2030-2035, personalized learning will boom thanks to hybrid and, eventually, strong AI (as opposed to e.g. virtual assistants or speech/image recognition systems).

“The recent growth of the AI market is an excellent opportunity for higher education institutions. I believe that personalized learning should be fueled by strong AI and that’s something that will make our education system unique,” comments Vladimir Vasilyev.

What’s more, the rapid development of informational technologies and geopolitical changes also strongly affect the Russian education system. According to Nikolay Kudryavtsev, the Rector of Moscow Institute of Physics and Technology, this is driving universities to develop technologies that are currently unavailable in the country and create specialized training programs for specific companies.

As added by Victor Koksharov, the Rector of the Ural Federal University, universities should focus not only on technological and geopolitical trends but also on the needs of the government and industrial companies and, depending on this, adjust the number of Bachelor’s and Specialist’s programs they have. Whereas Mikhail Gordin, the Rector of Bauman Moscow State Technical University, suggested that the percentage of Specialist’s programs at universities will progressively increase over the next few years, especially in engineering fields.

The Future of Higher Education is an annual university conference organized by the agency RAEX Analytics. It brings together representatives of Russian universities to discuss prospects and trends in education. In 2022, the forum also hosted a presentation of the RAEX annual ranking. For the fifth year in a row, ITMO University has been included in the top 15 of the ranking, this year advancing from the 14th to the 13th position on the list.