The robot’s algorithm controls the self-balancing scooter’s motherboard, the human-size robot impresses with its dimensions, weight, and technical solutions. The team has already won the St. Petersburg Open Robotics Competitions, and their next goal is the national stage of the RoboCup. 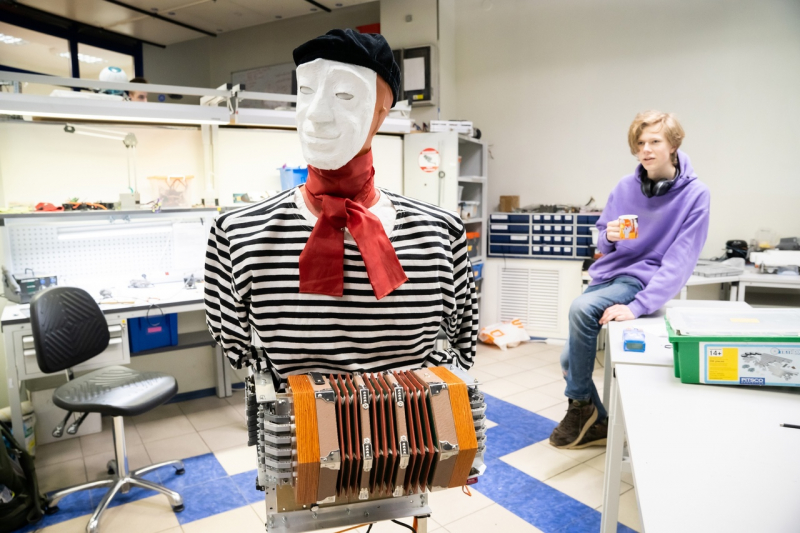 The robot named Robert Robotecky became the first hoverboard-based robot at the laboratory and probably one of the largest and heaviest self-balancing DIY robots. Dmitry Yakovlev, a tenth-grade school student and head of the team, believes that the need to reflash the scooter’s motherboard complicated their task.

“We stuck to the classical approach and used PID controllers for stabilization. There are two controllers: the first allows the robot to move on uneven surfaces with the help of wheel feedback and the other uses the combination of a gyroscope, accelerometer, and magnetometer to realign its position when it sways or tilts. We had to turn the scooter’s motherboard into a motor driver so that it could follow the commands of our control board, not built-in sensors. The result is an affordable platform that doesn’t require extra drivers and can easily be replicated,” explains Dmitry Yakovlev.

Not only does Robert Robotecky perform stunts inspired by Boston Dynamics’ robots, but also plays various musical instruments, following a tradition set by all previous humanoid robots at the lab. The well-known robot Seldon – the winner of various awards, including the silver medal at the RoboCup Asia-Pacific 2017 – plays the guitar, and ELSA – the second-place winner at RoboCup 2019 – is a flute virtuoso. As explained by Igor Lositskiy, the head of ITMO’s Youth Robotics Lab, the team wants to create a robotic ensemble that could perform together with people.

“We’ve always created musical robots, for instance, ones playing the guitar or flute. Now, we decided to go for a concertina and even had to buy it on Amazon because we couldn’t find any in Russia. We were inspired by the famous Licedei Theatre skit featuring the song Blue Canary. The only difference being that our robot doesn’t pretend to, but actually plays the instrument. The project involved two eighth-graders from Lyceum No. 239 who joined our laboratory this year. Dmitry Kovalko took over the programming part and Valery Rybin designed the robot’s arms. Nikita Luskin, another member of the team, was responsible for the rotation of its head – the result was quite impressive,” says Igor Lositskiy.

At the city-wide competitions, Robert will demonstrate its two stage roles and will be supported by another robot named Glazastik V2.1 that will dance in the background during the performance. The creator of Glazastik V2.1 is Elina Knyazeva, also a school student, and the project was curated by the lab’s staff Evgeny Zavarin and Igor Lositsky.

The next step for the team will be participating in the national stage of the RoboCup, which will be held in Tomsk on May 13-16. Igor Lositsky believes that Robert is a fairly self-sufficient project designed for creative activity rather than victories in specialized competitions. Its developers want to present their invention at exhibitions, forums, and ITMO events. Discussions are underway regarding the possibility of using the laboratory's inventions in live performances with one of St. Petersburg’s theaters.