The 20th annual celebration of the best graduates of St. Petersburg took place at the Peter and Paul Fortress on June 29. This year, ITMO University was represented by Tatyana Ivanova from the School of Physics and Engineering. She and other talented graduates were awarded certificates of appreciation from the Governor of St. Petersburg and bronze sphinx statuettes – a symbol of wisdom, intelligence, and perseverance. 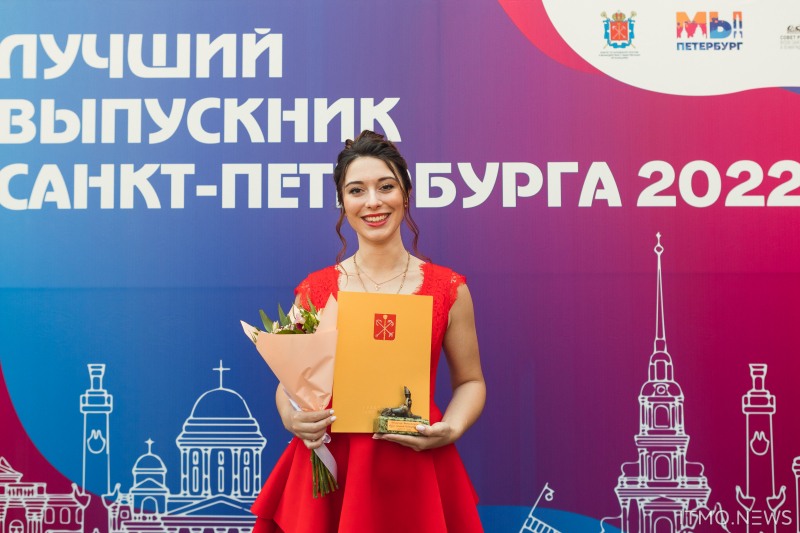 Rectors and vice rectors of St. Petersburg universities, as well as heads of military academies and government officials gathered at the Commandant’s House of Peter and Paul Fortress to congratulate the best graduates with the successful acquisition of their degrees. The ceremony was opened by Alexander Beglov, the Governor of St. Petersburg.

“I’d like to highlight that you’ve made it through a lot and achieved great results. You’ve been taking part in social activities by participating in competitions, contests, and volunteering, plus, you were the first students to switch to remote learning during the pandemic. This wasn’t easy. Two years of the pandemic didn’t go unnoticed but you and your lecturers made it. It’s a huge victory to be able to study and work in such difficult conditions,” says Alexander Beglov.

At the ceremony, the top graduates of St. Petersburg walked the red carpet and received certificates of appreciation and bronze sphinx statuettes from the Governor. Among them was Tatyana Ivanova, a graduate and an employee at the School of Physics and Engineering, who represented ITMO University.

Tatyana entered ITMO University as a Bachelor’s student at the Laser Technologies program and afterwards decided to study quantum physics at the Quantum and Hybrid Materials Master’s program. According to her, the School of Physics and Engineering became a second home to her and she received nothing but support from her colleagues.

During her studies, she actively participated in ITMO’s social activities and helped organize and hold various events, such as I Am a First-Year art contest, Miss ITMO, and People Need You! contest for social projects by school students. Moreover, Tatyana successfully researched dichalcogenides of transition metals in the Low-Dimensional Quantum Materials Laboratory and co-authored papers published in prestigious international journals like Nature and LSA.

“I’ve always felt that it’s important to live your life fully and inspire others. In my experience, if you feel interest towards something, you should act on it without postponing, as over time, your priorities might change and whatever you liked as a first-year student you might not enjoy as a graduate. That’s why I always seize the day and engage in activism, sports, and science. I’m so lucky to have picked my faculty. The School of Physics and Engineering is like family to me – a family that supported me in all my endeavors. For example, as an employee I’ve done two internships – at the Institute of Photonic Sciences in Spain and the University of Sheffield in England. As a junior scientist, I managed to come up with a way to produce record-breaking monolayers of dichalcogenides of transition metals and in 2020 I patented this project and won the Vladimir Potanin Foundation scholarship. I’m proud that as a Master’s student, I posed as a research supervisor for a graduate of the Presidential Physics and Mathematics Lyceum No.239, who ended up receiving the first-degree diploma at the Sakharov Readings,” says Tatyana Ivanova.

The ceremony was concluded by Dmitry Kolotushkin, a graduate of St. Petersburg State University of Industrial Technologies and Design and chairperson of the national public organization Russian Union of Youth. He gave a speech on the part of all  graduates of 2022 and fired the traditional 12 o’clock cannon at the Naryshkin Bastion.