Every year students and staff of ITMO University are awarded scholarships by the International Society for Optical Engineering (SPIE). This year, five students representing the Terahertz Biomedicine and Metamaterials laboratories became the scholarship competition’s winners. ITMO University, therefore, has won the most spots, coming out ahead of the University of Arizona (four winners) and University of California (four winners). Read below to learn about the winners’ projects. 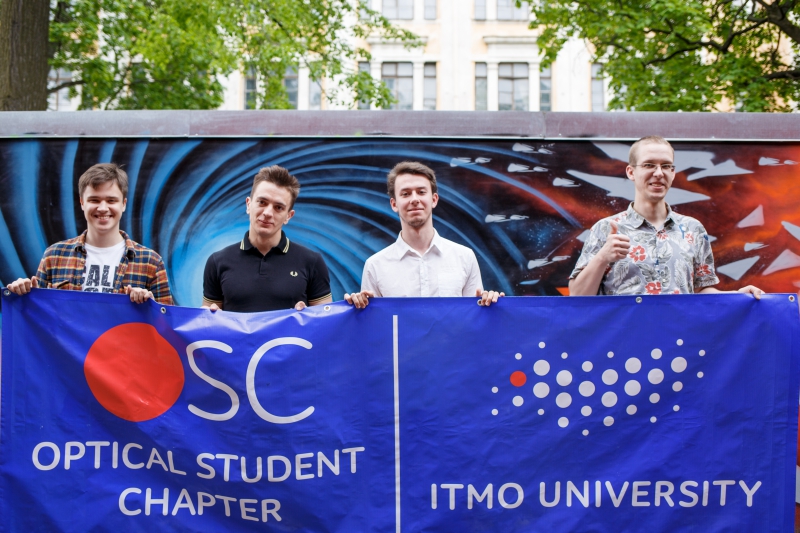 ITMO University’s Optical Student Chapter is the largest in Russia, with 51 participants in all. Today, the chapter includes branches of three international organizations: SPIE, OSA and IEEE. Every year, members submit applications for scholarships from these organizations. Their committees tend to assess each project’s relevance, content and the applicants’ organizational and scientific work. The five chapter members who won this year’s SPIE scholarships are regular participants of various conferences and symposiums.

I research two-dimensional chiral metamaterials, i.e. metasurfaces. The term “chirality” comes from Greek and was coined by Lord Kelvin in 1893 to refer to the lack of inner reflective symmetry in objects. In my project, I consider the possibility of reverting the polarity of radiation using a chiral metasurface with graphene inclusions. By changing the absorption potential of graphene, we can change the polarization of radiation that passes through a metasurface. This research could be potentially used to create a compact polarization filter for usage in biophotonics research.

My project is a continuation of the project with which I won a scholarship from the IEEE Microwave Theory and Techniques Society last year. In that project, experimental prototypes were made using laser engraving; this time around, graphene imposes certain limitations on how the metasurfaces can be made. However, I plan to deal with this challenge once I’ve completed the theoretical part of my research.

My research deals with new two-dimensional materials in the terahertz frequency band. The most common 2D-material is graphene, but today it’s just not meeting the expectations that people had for it, and scientists are looking for new materials. We teamed up with the University of Exeter to explore these materials. We study their properties, namely the effect of optical radiation in the visible and infrared bands on their optical and electric properties in the terahertz frequency band. What’s useful about the project is that 2D materials like these can be integrated into metasurfaces as replaceable, controlled parts. For a while now scientists have attempted to design metamaterials that can be modified. Using 2D-materials in metamaterials lets us control the properties of metamaterials. In our case, we’ll be using optical radiation for that purpose. One drawback of this approach is that we’ll need to use an auxiliary radiation source. At the same time, we win in terms of time efficiency: with femtosecond pulses, changes will be very fast. Our invention can be used as an ultra-fast modulator in terahertz communication systems.

My area of study is pulse THz spectroscopy and I’m developing a technology for non-invasive glucose monitoring. 7% of the world’s population are afflicted with diabetes, and all of them have to pierce their fingers five times a day to measure their blood glucose levels. My project focuses on the development of a method in which such a procedure is no longer necessary; patients would simply touch the device to find out their results. There are a number of challenges, among which is increasing the selectivity of response so that the device reacts only to glucose and not other substances. My colleagues Alexandr Grebenchukov, Maxim Masyukov and Alexander Chernyadiev all work at the Terahertz Biomedicine Laboratory with their supervisor Mikhail Khodzitsky developing metamaterials that we expect will affect the selectivity. I believe that such a combination of different branches of science in one lab helps solve a task from multiple angles and find the best solutions. Right now we have a set of initial data, but we’re also working on improving the technology further; computational modelling has already confirmed the correctness of our predictions for the experiment.

I’m working on several topics, including dielectric nanophotonics, metasurfaces, nanoantennas, two-dimensional semiconductor materials and terahertz sources, and I’ve spoken about each of them in brief in my application for SPIE. However, I am giving the most attention to my most relevant work right now, which is about the interaction of 2D semiconductors, single-layer dichalcogenides of transition metals (1L-TMDC), with optical nanostructures. I became involved with this topic a year ago, and since then I’ve achieved significant results; for one, I’ve been able to confirm that in a system “silicon nanoparticle in a mono-layer shell”, TMDC, there is a strong connection between the exciton in TMDC and the nanoparticle’s optical mode, which forms the so-called hybrid light states. This effect is interesting because we can use it to create a nano-scale polaritons laser. Such lasers have low thresholds for shifting from light-emitting mode to laser generation mode and have potential applications in photonic microchips.