On 15 April in St. Petersburg’s Youth House, “People of the World”, an International Student Festival, was held. At this festival, you could hear people speaking different languages, presenting their country and culture, and reading poetry singing songs and presenting their national cuisine. Foreign students at ITMO University took part in this contest for the first time and came third. 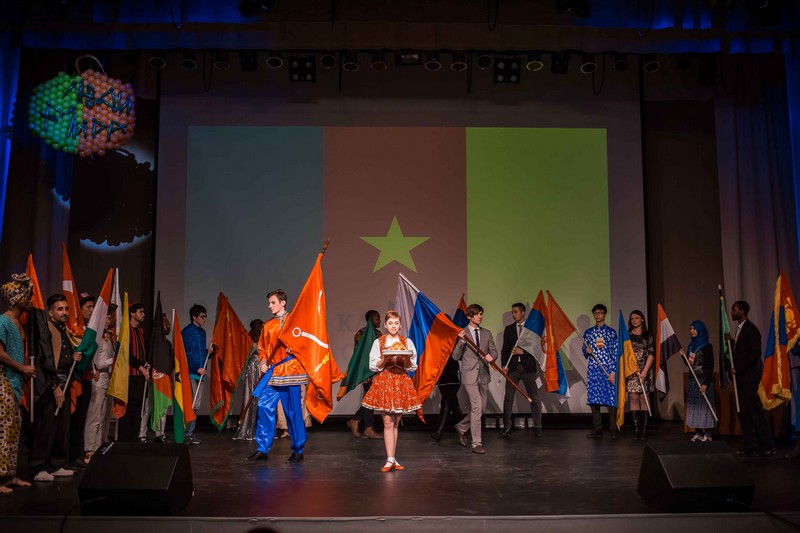 This the fourth time the “People of the World” festival has been held. It grew out of the International Student Fair which has been running for about 11 years, organized by the Russian State Hydrometeorological University (RSHU).

“In 2006 it was a small event, with only 40 people participating, but the fair gradually began to expand, and foreign students joined from other universities in St. Petersburg. Now this event lasts several days and includes a conference and a festival at the Youth House”. – says Larisa Travina, who founded the festival, from the Department of Russian language and preparatory programs at RSHU.

This year, the festival lasted three days, beginning with the conference “We speak the same language”, where participants discussed interesting characteristics of various world languages, the nuances of studying the Russian language and other aspects. But, of course, the day everyone looks forward to the most is the fair which includes a contest, where foreign students present different artistic and dramatic performances in five different categories: “National Poetry and Country Presentation”, “Russian songs performed by representatives of different nationalities”, “National Music”, “National Cuisine”, “Traditional Cultural Dance”. On this day, more than a hundred students gathered on the stage of the Youth House, from Russia, Vietnam, Republic of the Congo, Ecuador, Uzbekistan, Mongolia, Turkmenistan, China, Serbia, Tanzania, Madagascar, Kenya, Spain, Colombia, Iraq, Nepal and many other countries. In the struggle to take the prize for each of the five categories, the participants recited poems and shared about the traditions and cultural specifics of their countries.

ITMO University’s Vietnamese students, Dong Xuan Thanh and Nguen Van Chuyen charmed the audience by reciting a poem which they translated into Russian. For this, students were awarded third place in the "National Poetry and Country Presentation" category.

"Students from ITMO University’s Russian language preparatory course in St. Petersburg who have only lived in Russia for six months participated in the event. They translated a poem that was originally in Vietnamese, into Russian, and then together we all made sure it rhymed while retaining its meaning. This helps students to immerse themselves in the subtleties of the language, to feel it, not just memorize words, because the poem and the song involves communicating emotions, but without understanding the language, it’s impossible to achieve this ".  – explains Natalya Kondrashova, Head of the Department of Russian as a Foreign Language at ITMO University. "I’ve been in Russia nearly five months and I only study the Russian language. Learning songs have been a great help to me. This is yet another way of improving my Russian, and this song really highlights the specifics of the Russian language", – says Jafet Zoogah, ITMO University student from Ghana.