The second day of the main open-air event of St. Petersburg – VK Fest – has ended. Just like on the first day, the organisers of each location provided visitors with a chance to dance, learn how to make friends, visit workshops, walk through famous museums in VR format, play computer games and also learn about how to create them on their own. ITMO.NEWS has written about several key locations at this year’s festival. 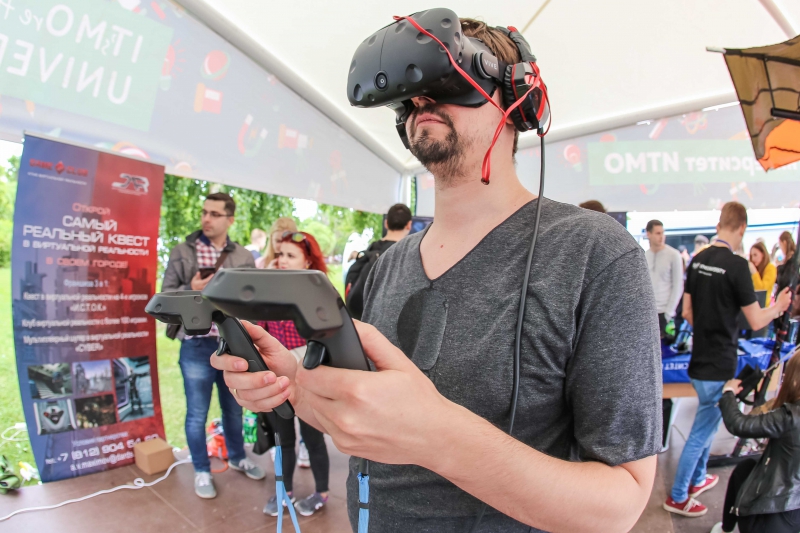 One of ITMO University’s spaces was a stand dedicated to GameDev, a field of study that will be introduced at the university this autumn. The new area of focus is intended to encourage students toward developing the area of game development. This year the university will launch a new Master’s program, where students will be taught to create game content (you can learn more about this program here).

The main difference of this year’s festival compared to the previous ones was the expansion of the exhibition zone. At the GameDev space, the specialists of ITMO University’s eScience Research Institute and their partners from Digital Banana (who educate school children in the area of computer games) and colleagues from the Southern Federal University presented their products. The visitors learned where in Russia they can learn to create computer games and how to apply their skills on a professional level.

It was possible to play games made by beginners and find out more about how they were created. ITMO University was offering to try out a VR-quest that was created by students from the Department of Engineering and Computer Graphics in collaboration with students of High-Performance Computing Department.  In one semester the students made a full-fledged VR-game in sci-fi style with three difficulty levels and additional elements. The main goal of the game is to solve puzzles to fix a spaceship and beat other obstacles (more about ITMO University's zone at VK Fest here). The representatives of the Digital Banana demonstrated several game projects of their students. A game created by an eleven-year-old girl is an amazing example that shows that you can create videogames even as a child. The designers from Southern Federal University showed how to teach a Lego-robot to play on a tablet.

Visitors could find out that development of computer games is indeed a big business in the computer games zone situated right beside the GameDev space. This year the zone hosted some big names: the large international development companies and publishers Blizzard Entertainment, Ubisoft and others presented their stands.  A part of the zone was dedicated to cybersports.

The greater part of the games zone was created by the SOFTCLUB Company – the biggest distributor of video games in Russia. Altogether it demonstrated four game products. A part of the zone was allocated for the collectable card game Hearthstone based on the Warcraft universe of the Blizzard Entertainment Company.

The games stand was divided into two zones.  The first one was allocated for free games on laptops or tablets: the organisers created special accounts and set of decks. Even for people familiar with the game, it was interesting to see the new rare cards. In the second zone the players with their own devices could meet and join their forces on the Internet and participate in a lottery and win some prizes. The next game is Fortnite from the Epic Games company that the organisers of VK Fest presented ten days before the official release date. The visitors could play the full version of the online action game where characters fight against zombies. One of the features of this game is that besides traditional battles with weapons, players can build shelters and fill them with traps. Also there were presented this year’s two main fighting games: Injustice 2 and Tekken 7, games of the same genre but with a different approach. Fans of the fighting genre could also take a crack at mini-tournaments.

ASUS Company organized another game space. The company’s products made under the Republic of Gamers brand were produced especially for gamers. In this zone there were ten powerful gaming computers and on both days a team tournament in Dota 2 was held; the winners received products from the company. Besides the game zone, the organisers set up an interactive exhibition zone: there they presented a new project from HyperPC and a powerful gaming computer ASUS ROG GX 8ooVH; the visitors could play top computer games on it at maximum settings.

Developers also set up an overclocking zone where, by cooling a processor with liquid nitrogen, they increased its productivity and beat world records. One of them was a record in overclocking – 7.562 GHz frequency. The art zone this year was represented by three museums: the State Hermitage Museum, the Russian Museum and the Saint Isaac’s Cathedral. They offered the guests interactive lessons and virtual excursions. At the Hermitage stand, the guests could plunge into history in the format of 360-video for 15 minutes. It was a video tour starring Konstantin Khabenskiy. In another zone there was an art object “Hermitage Planet” and in a special sand-pit visitors could dig up their own artifacts (copies of the musem’s showpieces that were once found by archeologists).

The organisers offered guests a variety of workshops: for example, everyone could try to make a wooden souvenir using a wood burner, draw their own planet, make Japanese postcards out of real Japanese paper, as well as kites or Chinese masks. In the museum zone there were also lectures at which the audience could learn about how Chinese paper is made and many other things. Another location at VK Fest was an experimental zone from “Dobro.Mail.ru” that hasn’t participated in any other festivals yet. The creators of the charity space decided to change the perception of charity and offered to look at this process from another point of view: for supporting a philanthropic organisation that helps severely ill people, visitors could get three types of medical diagnostics.

The first type was the ultrasonography of neck vessels (a neurologist’s consultation). This diagnostic is necessary to decrease the risk of a stroke that today becomes more common among young people. That’s why the organisers were offering this type of medical service even to their youngest guests. The second procedure was a mole check-up. This procedure helps to prevent possible development of cancer. The third type was a women’s consultation where they could find out about the risk groups and prevention of breast cancer. The organisers emphasized that this topic still remains a taboo for many people. However the knowledge of the risk groups can help detect it in time and prevent ilness. All the donations go to projects “Добро Mail.ru”. The organisers of VK Fest took contact information from each visitor of the zone to send them a report about how their donation was used. According to the organisers, this is the basic idea of their service. As the head of the project, Alexandra Babkina, notes, their experience at the festival will help them implement their project at other events. This helps increase the popularity of preventative maintenance in Russia - she says. According to Ms. Babkina, people need to understand that undergoing a medical diagnostic is easy - they can even do it at a festival