ITMO.GO is an annual event for welcoming new members to the ITMO.FAMILY, a community of staff, students, graduates, partners, and friends of ITMO University. This year’s celebration was attended by more than 5,000 people including ITMO Bachelor's, Master's and PhD  first-year students. Keeping totradition, the grandiose open-air event was held at the square in front of the Baltic House theater in the verdured setting of Alexandrovsky park. The festivity was as fun as it was informative; ITMO newcomers not only had the chance to let their hair down before the start of their new academic adventure, but also learned about the exciting opportunities the university offers, enrolled into ITMO’s artistic and sport clubs, and enjoyed a virtual bike ride with the Rector. 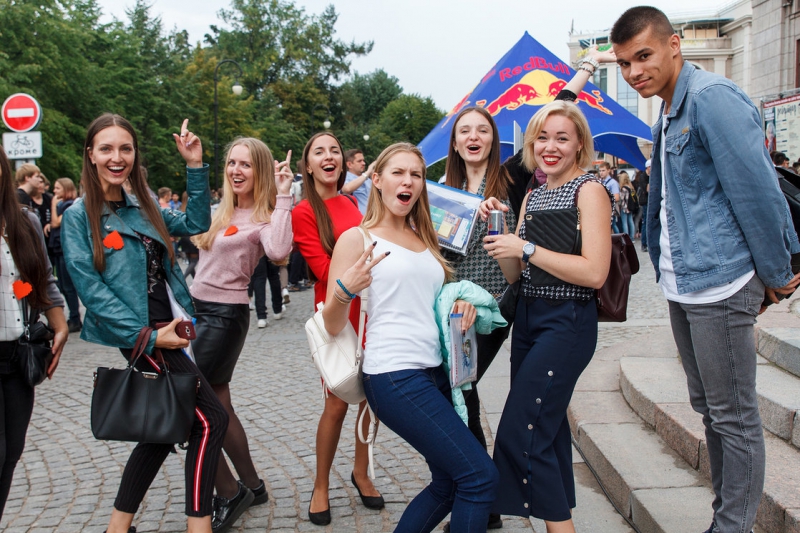 This Saturday September 1, ITMO University welcomed its first-year students with a spectacular open-air celebration. Greeting the newcomers, the university’s Rector Vladimir Vasilyev noted that all the ITMO activities, from events and festivities to the academic day-to-day, lend on the university’s hallmark unconventional approach that is fundamental to ITMO’s dynamic growth and its ability to find answers to the central global challenges of our time.

“There’re lots of universities in Russia and all over the world, but ITMO University stands out from the thousands of its counterparts out there. It’s not that we work on the cutting edge of scientific and technological progress or have the best specialists that spearhead the programming, IT, biotechnology, robotics, and cyberphysical systems research that makes our university special. What’s truly important and what we’re especially proud of is that ITMO University is the first unconventional university, and this can be seen in the innovative, creative, and unique teaching and learning approach ITMO fosters in the fields of education and research. We shun away from the mundane, conservative, and ineffective methods still used by the majority of universities today. Instead, we firmly believe in unconventional education and research as the global challenges our world faces today require new and creative solutions. Few higher education institutions task themselves with answering these challenges, and ITMO University is one of them,” commented the university’s Rector.

The square in front of the Baltic House theater became a huge entertainment area allowing participants to mark the occasion by being photographed on the winners' podium, get in the rockstars' shoes by playing Guitar Hero, and have a blast from the past playing retro arcade games and the well-loved Sega, Sony PlayStation, and Nintendo Entertainment System game consoles. Master’s, PhD, and the general F.A.Q information booths were also set up in case the newly-welcomed students have any questions regarding student life, dormitories, summer schools, and internships. Participants were also given the opportunity to enroll into any of ITMO University's art and sports clubs of their choice.

Those who had already got to know the university a bit better headed to the snazzy interactive area to play videos games and try their shot at the racing simulator. For all the sports lovers attending the event, there was a special sports area with basketball, table tennis, and mini golf facilities. Students also had the chance to compete in armwrestling and rowing, as well as to embark on a one-off bike ride with ITMO University’s Rector. And everyone wishing to buy a souvenir that would remind them of this momentous day could do so at the university’s ITMO.STORE which offered a wide array of ITMO memorabilia.

ITMO.NEWS talked to some of the first-years attending the event to find out why they chose ITMO University, how they got into ITMO, and what they expect from their higher education adventure.

I won an academic competition, so I was able to enroll into ITMO without any entrance exams, but I also took part in the ITMO.STARS contest with a project I’ve been working on since the ninth grade. Aimed at helping the deaf-blind communicate, this project was inspired by my own experience of meeting people with these special needs; I resolved to put my programming skills to good use and create an app that would facilitate disabled people’s interaction with each other and the world around them. Initially I didn’t have any idea how to make my idea a reality, but the understanding dawned on me when I was watching my favorite film, Christopher Nolan’s ‘Interstellar’. There is this moment when the protagonist tries to transmit information from a black hole, which obviously doesn’t let as much as a ray of light out, by using the Morse code. So I decided to base my project on this technology: after the information is entered in the app, the latter transforms it to Morse code and relays it to a deaf-blind recipient through the vibrations of a smart-watch device. Vice versa, deaf-blind people can communicate by tapping on the screen of the device. I presented my project at the Technological Forum research conference that was held in my home city of Ufa. For me, this forum was a gateway to the entrepreneurial community; now I myself am a startuper.

When it came to choosing a university, I considered Moscow first as Moscow has a good base that could propel me in my project-related work; for example, there’s a resource center for deaf-blind people. But then I was approached by ITMO University staff who invited me to St. Petersburg to learn more about the city and the university. I came and decided to stay.

Maria: Sergey and I studied at the same school in Perm, although we were in parallel classes. I first heard of ITMO University when I was still a school student and instantly realized that it was just the place for me as I’ve always wanted to study software engineering; this scientific field is in high demand now and will only continue to grow in the future. Other factors that influenced my decision were the wide range of Master’s and International Master’s programs ITMO University offers: I plan on continuing my education after completing a Bachelor’s degree. I’d also love to go on an international semester exchange.

Sergey: When in school, I attempted to do some of the things that we’ll be taught here at my Bachelor’s program, but it didn’t come to much. I hope that my university studies will teach me lots of new and valuable skills which will help me nail those complex real-world tasks. What I’m interested in most is practical work; I want to build a successful career in the industry, so I’m thinking of applying for a job in a couple of years.

Geographical information systems was my first study choice, but it all changed after a family tragedy: when my grandmother died because of a misdiagnosis, I resolved to work on a telemedicine system to help prevent medical errors. This concept hasn’t been implemented yet; I have as much as the original idea, a project description, and a goals and objectives plan at hand, and I used those to apply for the ITMO.STARS contest. I’ve chosen ITMO University as my study destination as I consider it to be the best IT university in St. Petersburg. My last two years at school were dedicated to rigorous exam preparation as I was set on being an ITMO University student, so much so that I didn’t apply to any other university out there. I have big plans for my telemedicine system project; I want it to become a telemedicine giant with its headquarters in ITMO.Highpark.

I discovered ITMO while I was in the midst of applying to different univerisities. My initial plan was to study fundamental computer linguistics, but then I decided to switch to a more coding-heavy ‘Intelligent Systems in Humanities’ program. I didn’t partake in any programming school academic competitions, but I participated in English ones; it was thanks to winning those that I got admitted to ITMO University.

I see myself as a future intelligent systems developer; artificial intelligence is one of my main areas of interest. A master’s degree is an obvious next step for me; I’d love for my work to contribute to scientific research.

It was two years ago that I first started to look into choosing my future university; my teachers really helped me in that process. I found ITMO University on my own, though, and I was told that I’d have to work extremely hard to get in. I was prepared to do that and spent the last two years of school studying maths and computer science intensively. Early on I decided that I’ll definitely apply for a Master’s degree when the time comes. I want to try my hand both at science and at practical work in the industry; I think that this will help me discover what suits me best.

I was a member of ITMO University school team in robotics and participated in numerous student projects and academic contests, but it was the Forester robot that I worked on as part of the ITMO robotics team that secured me my ITMO University place thanks to the ITMO.STARS contest. Forester is a walking and riding robot that monitors the state of forests with an impressive capacity of ten forest guards in one: it not only evaluates the trees’ condition and identifies the areas in need of preventative felling, but also helps predict possible wildfires. Guided by the team coach Igor Lositskiy, we assembled the robot from servo motors, Lego bricks, and various electronic devices. Using its internal neural network, our Forester robot can create forest maps, discern between different types of trees, gauge their condition, and include them in its database.

ITMO University was my main study choice; I’ve been studying and practicing robotics here for two years now and know that the university has all I need to progress in my chosen professional path: I plan to keep on exploring robotics going forward.