Bike Ride With the Rector 13.0: Participants Share Their Impressions

This Wednesday, ITMO students and staff gathered at the Krestovsky Ostrov metro station for a traditional bike ride with ITMO’s Rector Vladimir Vasilyev. The relentless downpour and strong wind, which had been spoiling the mood of the city’s residents all day, did not scare the cyclists away. Among those who were not intimidated by the bad weather was also an ITMO.NEWS journalist, who joined the cyclists and talked to some of the participants. 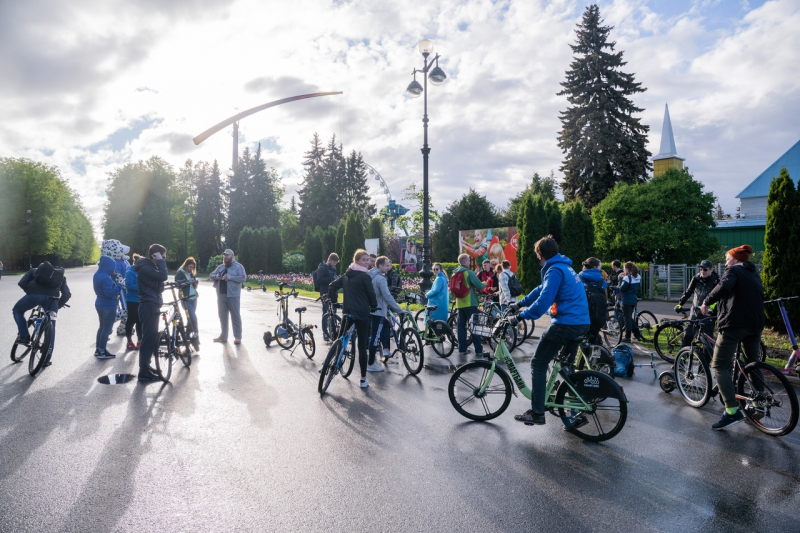 It seemed as though this year the weather tried to break the long-standing ITMO tradition. The heavy rain, accompanied by gusty winds, made ITMO.FAMILY members check the weather forecast every now and then. And it was not optimistic: the rain fell over not only St. Petersburg. but also the Leningrad, Pskov, and Novgorod regions, as well as parts of Lithuania and Estonia.

By 7 PM, when the ride was set to start, rain clouds were supposed to drift north but even at 6:30 that was still hard to believe. However, those who couldn’t be scared off by rain and came anyway were rewarded when, at around 7 PM, the weather cleared up and the sun peeked through the clouds.

Unlike last year, almost all the participants came on bicycles, with only a few riding scooters. The route was changed, too. Instead of going through the 300th Anniversary of St. Petersburg Park, the cyclists decided to ride along the shady paths of the Kirov Central Park, to the banks of the Srednyaya and Bolshaya Nevka and near the Yelagin Palace, where major events such as the STEREOLETO music festival or the Tulip Festival are often held. In fact, tulips are still blooming there now, so the participants stopped to take some pictures of the wide variety of flowers – from bright yellow to dark lilac.

Having looped around Yelagin Island, the participants returned to the park entrance where they took a parting group photo. Meanwhile, ITMO.NEWS talked to some of the participants to learn more about why they decided to join the ride even despite the poor weather.

Ekaterina Safina, a third-year student at ITMO’s Faculty of Control Systems and Robotics

This is my first bike ride with the Rector. I wasn’t happy with the rain in the morning, but I think that it’s typical for St. Petersburg. Anyway, it’s not a good reason to give up on a new experience such as riding a bicycle for the first time in St. Petersburg. It’s been a while since I rode a bike – that was back home, in Krasnodar.

A friend of mine and I were invited by another friend. Ironically, she didn’t make it, but my friend and I decided to try: we rented bikes and here we are.

In fact, I didn’t know much about the bike ride. I expected some physical activity, chats, laughter, and beautiful views, even in the rain. I think that this is a nice tradition. It’s always great when a lot of people do something together. It’s also a chance to make new friends and meet in person the university’s top staff, to get to know those who are in charge of things and shaping the place where you study. These are good reasons to join.

Every year, I try to do the bike ride but every time I’m either late, have no bike, or come to the wrong place (laughs), so technically this is my first time.

I enjoy cycling through beautiful places, and here you also have good company and can even rent a bike with a great discount (laughs). Besides, these rides make us all closer. We spend a wonderful evening together, watch the sunset, take pictures, and exercise.

The weather was, of course, not so great, but my friend and I checked the forecast and decided to go anyway. We couldn’t miss our first bike ride.

The weather wasn’t that good but then it became perfect (laughs). We knew that it was going to happen and came for the ride anyway. Although I’m not a big fan of cycling, I rented one just for the occasion.

This isn’t my first time here. In the past times, I got to roller-skate, too. It was not easy to keep up with the Rector’s pace. We might be younger, but it was still hard.

I think the rides are fun and not too far from the university, so you can always come to the park and enjoy some good company.

This tradition appeared after I graduated from the university, but when I still worked there. It’s always great to see good people again, and you could say that this is how Vladimir Nikolaevich (the Rector – Ed.) motivates me to do sports.

I’ve probably participated ten times already. Once, it poured very heavily and I think it’s awesome that we never give up even despite the city’s typical weather. By the way, that time I was wearing a unicorn kigurumi and I think it looked cool.

I don’t usually ride bikes and I’ve been renting e-scooters for the last couple of years. This, too, should encourage everyone to join the ride as you can now take it easy and use a scooter. Although this time I decided on a bike to, so to say, challenge myself and see how I’d hold up after the quarantine.

Pavel Mavrin, an assistant at ITMO’s Faculty of Information Technologies and Programming

I always participate in the bike ride when I have the chance. The ride brings everyone together for a good goal, and I enjoy such events. But, honestly, when I come on a scooter, I usually run out of strength by the end, though this time I trained a bit (laughs).

By the way, I ride my scooter to the university every day. Once, I rented a bike for the ride, but I don’t really like renting because whichever ride you pick is just not designed specifically for you. And your own scooter is fine-tuned to meet your needs.

When I was on my way, I was worried about the weather but Yandex promised that there’ll be no rain and was right. Yet there were fewer people than usual. I actually often meet my students on these rides. It gives a sense of community and that’s a good thing, as the educational process should take place not only in classrooms. Students should know that their teachers are also ordinary people and learn from them not only at lectures.