In St. Petersburg, there is a special project called "History of Tomorrow", devoted to volunteers in the city. Ilya Bokatiy, a volunteer ecologist and fifth-year student at ITMO University, majoring in optoelectronic devices and systems, is one of the participants of the project. Ilya organizes ecological events for students and postgraduates from different countries in the world. With the support of the Student Volunteer Center (in Russian) at ITMO University, he has already managed to implement several ideas, including helping with “Ecological Raids” – an international camp for social projects, where people can get to know different environmental initiatives, and also contribute to taking care of the environment. Ilya spoke with ITMO.NEWS about what kind of volunteering he does and how a newcomer can navigate in the world of volunteering. 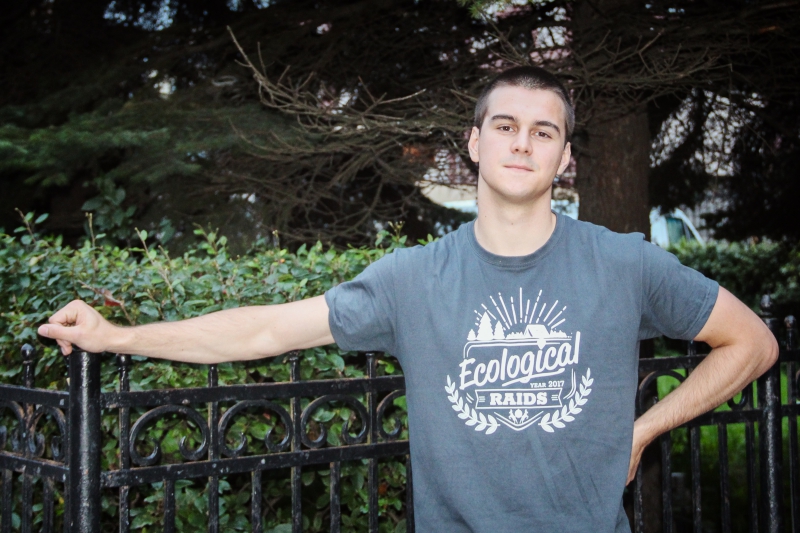 Ilya, recently you became the hero of the city project "History of Tomorrow", which raises awareness regarding ideas of mutual assistance and good relationships with one another. Tell us how you started volunteering and became involved in ecology?

While studying at ITMO University, I learned about the Student Volunteer Center at ITMO and met with its members, who were supportive, kind and creative people. I watched them work. Then, gradually, I began to help them implement their projects and learned about the international camp “Ecological Raids”, in which you can do things that are helpful for the planet. I really liked the idea and did everything I could to get involved. They accepted me as a participant, and then the following year asked me to organize the camp.

Tell me more about the camp. How can someone get involved and when is it run?

The camp has been running for three years and is always held for the first two weeks of August. This year there were 30 participants from 12 countries, who planted 100 pine trees and collected 20 150-liter bags of glass and plastic bottles, which have already been sent for recycling. Usually we put together a team that will organize everything. Then we announce a new intake of project participants: these can be international students or students from any city of Russia. This announcement is posted on the Volunteer Center’s site. Then the applicant will have to write a motivation letter and go through an interview (all of these are conducted in English). There is no age limit. Then we spend two weeks in Yagodnoe, where we have different environmental activities and more. What environmental activities do you do at the camp?

I approach environmental activities from two points of view. The first point of view is that there are certain activities that affect global environmental problems such as deforestation, global climate change (they are connected) and so on. Considering the camp’s scale, it is difficult to deal with all of this since we don’t have much money, energy, people and I’m not afraid to say, power. We discuss these issues, and think about what kind of contribution we can make to solving them.

The second point of view on environmental problems are local problems, for example, contamination of surrounding areas. People who hang out around the camp on the shores of the Vuoksi river or Berestovo Lake, at the picnic grounds and in the woods, leave a lot of garbage behind themselves.

We are dealing with global problems by raising awareness, listening to lectures by special guests who are experts in the areas of recycling or alternative energy sources . We are dealing with local problems with our hands: we clean up garbage and plant trees. And I can proudly say that after three years at Yagodnoe we have achieved a lot: people don't leave trash where they used to. They no longer bury rubbish around the lake in order to hide it and not take it with them. Are there any other projects that you have organized as part of ITMO’s Volunteer Center or beyond?

In general, Ecological Raids is considered an "accelerator" of environmental projects. We go there with the goal of generating ideas that we are then trying to implement in the future. So, this year at the camp, in addition to lectures, picking up litter, planting pines and other activities, which we do every year, we also worked on an ecological house project. We discussed the design before the camp, and then during the camp we assembled it and filled it with equipment and made it “smart”.  An ecological house is a house that is designed to make your life more environmentally conscious, and eco-friendly. In our ecological house there are sensors that turn the light off when there is no motion in the room, provide automatic watering of plants with optimal amounts of water and so on. Our house has an area of 2.5 x 2.5 meters. It is a portable model of a house or apartment, which we plan to present to students and explain why and how important it is to lead a sustainable lifestyle, and why it is important to reduce your ecological footprint. Are there any other types of volunteering that you do?

There’s a volunteering project “Celebration for Children” also implemented at ITMO University, I do this for other reasons. We put together a team which prepares a special play on the basis of New Year fables, including props and costumes. We go to different hospitals and put on a play for children who have ended up there during the holiday season. For this project we also collaborate with the Miniature Theater at ITMO University.

What advice would you give to someone who wants to volunteer, but doesn’t know where to start?

You can search online about different types of volunteering and choose what you like the most. You can talk to people from ITMO University’s Volunteer Center and follow the group online since there is lots of information there. Also now we’ve opened a Resource center for volunteering and an NGO, where you can also come for advice. If you have special skills you can always find a way to use them for the benefit of others. For example, if you work in media, maybe you could do media volunteering, by covering events that will help promote obscure publications and so on.

If you are serious about getting involved in volunteering, how much time should you put aside for it? To what degree is volunteering a part of your life?

Volunteering is neither obligatory nor a permanent form of employment. For me it takes on a periodic but very rich part of my life. For example, the “Celebration for Children” takes up a couple of months leading up to New Years, and another month which we spend performing. Ecological Raids takes place over the summer, so it’s also seasonal volunteering. It doesn’t take a tremendous amount of time, so I have time for everything.

If a person wants to start getting involved in environmental volunteering... Recently, the biggest environmental event "360 minutes for Baikal", a huge project, in the context of which, from March to October, dozens of environmental rallies took place on the coast of Lake Baikal, and 18 other regions. Last year about 16,000 volunteers got involved, and this year over 17,000. Soon, there will also be a St. Petersburg all-Russian youth environmental forum (in Russian), which, if you want to engage in environmental volunteering, it is necessary to go to, because such activities give you a complete picture of what is being done in this field. There is also a large number of third-party organizations that are engaged in this activity. The most famous one is Greenpeace, a global foundation for the protection of animals, environment and so on. You can learn about their projects and job openings.

Do you think that everyone should be involved in environmental volunteering in one way or another? If yes, why?

The more environmental volunteers, the better. But what I really wish is that everyone could think about how they can make their life more environmentally friendly. I'm talking about in absolutely all aspects of life, work or leisure. These days there are a lot of technogenic problems that are caused by a large number of people on the planet. Our civilization is at the stage when you need to think, aren’t we consuming and producing too much? And what should we do to minimise consumption and waste? This is part of the global plan. I suggest that every single person considers buying eco-bags for shopping, turns off the lights when there is no need, doesn’t waste water and so on. No fancy advice here, the main thing is to watch yourself.

What are your plans in the field of volunteering for the future?

I look forward to working with Ecological Raids more intensively. I would like to make the project more wide-spread and diverse.