Saint Petersburg is the capital of innovation

Today, the VII St. Petersburg International Innovation Forum has started its work, for three days making St. Petersburg the capital of innovation. Within a few days more than 100 business and presentation activities will be held in the "Lenexpo". 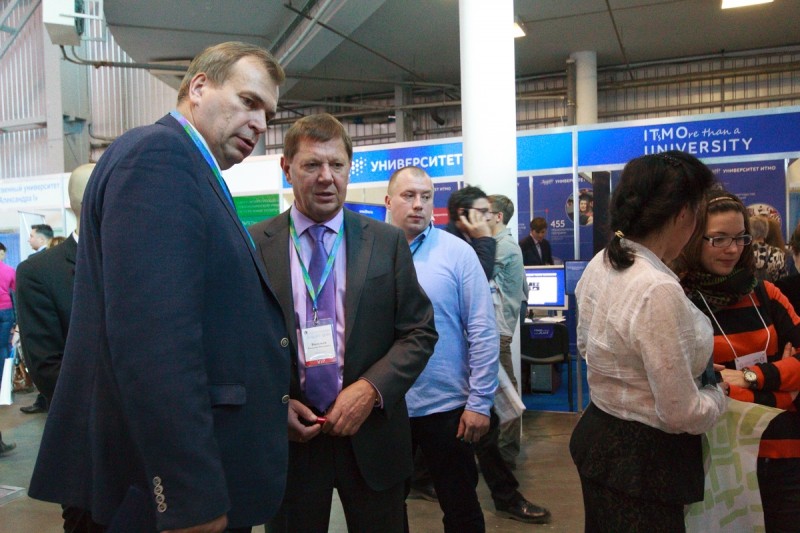 Today, the VII St. Petersburg International Innovation Forum has started its work, for three days making St. Petersburg the capital of innovation. Within a few days more than 100 business and presentation activities will be held in the "Lenexpo".

Organized for the seventh time the conference has established itself as a universal platform for dialogue and exchange between all the participants of innovation. The first day by the tradition began with the grand opening, where the representatives of the city authorities and leading conference participants made a solemn word. Sergey Voronkov, the CEO of "ExpoForum", said that from year o year the event becomes increasingly popular: the number of participants increases and the geography enlarges. This year conference was attended by delegations from 16 countries, as the Innovation Forum is a huge area to cooperation search and making mutually beneficial contracts.

The theme of the forum is "Innovations as a constant driving force for progress". Innovative activity is one of the key vectors of modernization of the ITMO University. At the stand of the Committee on Science and Higher Education of St. Petersburg the University presented achievements in various fields. For example, the employees of the Institute of Refrigeration and Biotechnology of the ITMO University treated all the visitors with the innovative ice cream. The advantage of this sweet over the usual one is that it is nice even for people with diabetes, because 15% of sucrose is replaced by natural syrup of topinambur, stevia and amaranth flour. Adding new elements to the usual ice cream does not affect the taste of the product and even improves it.

"All of these components are approved by doctors”, Tamara Arsenyeva, the Doctor of technical sciences, Professor of the Department of Technology of Milk and Food Biotechnology at the ITMO University, says. “This cream is ok not only for diabetics, but also people who follow the figure and health, because it is low-calorie. There is no mass production of the ice cream yet, but we're working on it".

Vladimir Vasiliev, rector of the ITMO University, also tasted a new dessert. He was pleased by the developments of the researchers and wished them success at the forum.

Also the project of the department based on the enterprise "Diakont" of the ITMO University was demonstrated at the stand. Development is specific equipment for nuclear reactors. The device is made by the type of probe and is used for diagnosing problems in the operation of the reactor. This equipment has been tested at the Leningrad Nuclear Power Plant last year.

"This device has a narrow profile, but finds its application not only in St. Petersburg, but also beyond. The probe is not the only our development. We also make serial industrial equipment, which can serve as a domestic analogue of many foreign elements", Vitaly Medvedev, the head of the "Diakont" design sector, says.

The business component of the forum was also held with the participation of the ITMO University. Speech by Vladimir Vasiliev, the rector of the University, at the plenary session on "Innovations as a constant driving force for progress" effected dramatically on the opinion of the majority of participants. While initially the question “what is the main factor in the successful development of innovation in Russia” was mostly answered as “the funding”, by the end of the speech by Vladimir Vasiliev, second vote showed that, in the opinion of the audience, the level of vocational education is more important in this issue. "The importance of education was described by other speakers: representatives of the government, infrastructure and business. And the main conclusion of our common speech is that the innovative nature of the economy depends on the quality of training", Vladimir Vasilyev said.

During his speech, the rector of the ITMO University noted that today the Russian higher education institutions operate simultaneously predictive function (in terms of social, economic, scientific, technological and innovation development), the function of generating scientific and technological trends, as well as the function of the large-scale deployment and transfer of new knowledge.

"Our participation in this exhibition means a lot”,Vladimir Vasiliev continues. “Our university is absolutely open to innovation. And if you look through the exhibition, you will see the brand of the university not just once. Thus, we show to the representatives of the business community and ordinary citizens of St. Petersburg that ITMO University is open-minded".

At the end of the first working day Vladimir Vasiliev continued business communication in a roundtable format on "St. Petersburg technological hub. Prospects of development and interaction with the regions". Participants discussed the need to expand the size of interaction and the possibility of cooperation of the hub with the city industry and the regions in order to develop innovative projects in the regions. On the panel discussion on "Young employees – to innovational Russia" ​​Nina Yanykina, head of Innovation department at the ITMO University, performed as an expert on aspects of education and realizing the potential of young people, organization, and support the development of innovative projects at the university.

Also during the first day the University has signed a number of agreements and memorandums. The Polytechnic University, the business incubator "Ingria", the Venture Company «Xmas Ventures» and the ITMO University signed a memorandum on the establishment of the St. Petersburg International Center «Demola». The project aims at providing a framework that allows students from different universities to create products and services in collaboration with high-tech companies. At the meeting the partners discussed the future plan of actions needed to run the project in St. Petersburg and expanding the partner network.

The ITMO University and the company «United Elements Engineering» signed a partnership agreement, under which the production and supply of engineering solutions in the field of heating and ventilation will be carried out. Currently, the basic Master Department, specializing in industrial climate techniques, is in process of creation at the University. The cooperation also involves the implementation of research and engineering projects. "In recent years, we are experiencing great difficulties in completing our staff, because today it is very difficult to find young professionals with a high level of technical competence”, Dmitry Stafeev, the general manager of the United Elements Engineering company, says. “And we would like to solve the issue of hiring new employees at the system level".

The Festival "Mechatronics and Robotics" provided the opportunity to step back from the busy business program for the participants of the Forum. Visitors were able not only to see these robots in action, but also operate them. A large number of student developments in the field of robotics was presented on the site: neural prosthesis made ​​with help of 3D-printer, robots guards and more. On the first day of the festival there were the competitions on Robotics among the youth teams and the Olympiad, which was attended by students and even the pupils of St. Petersburg.

"First of all, as organizers, we want to encourage the development of robotics industry in Russia and increase its popularity among young people”, Sergey Tsepinski, the assistant professor of the Department of Management Systems and Informatics of the ITMO University, the founder of the “RoboEd company, says. “The forum is a great platform for presenting educational programs and new technologies, because there are really interesting technological solutions in this hall. The whole event is aimed at the development of youth robotics and Russian technologies in general".