In December 2014 ITMO University, University of West Bohemia in Pilsen (Czech Republic) and the University of Le Mans (France) have signed the framework agreements on joint educational and research activities and contracts for the development of double-degree postgraduate programs. 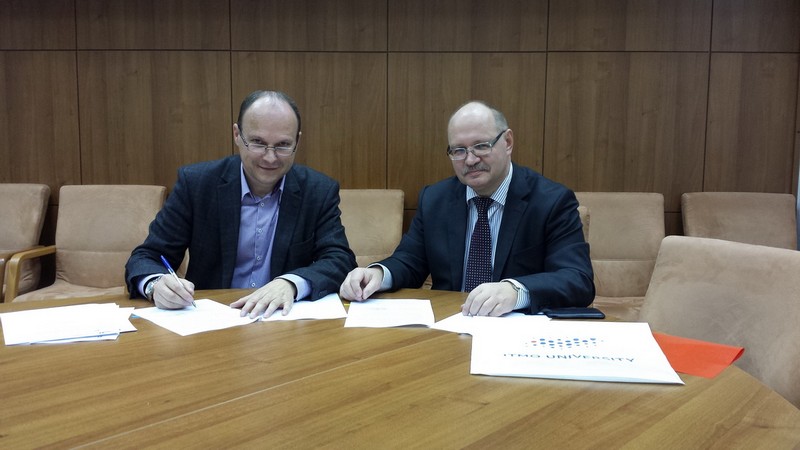 Yuri Matveev, the head of the Speech Information Systems Department and the International Laboratory  for Multimodal Biometric and Speech Systems, the employee of the Speech Technology Center, represented ITMO University during the negotiations. The French university was presented by Professor Rachid El Guerjouma, the President of the University, and Professor Yannick Estève, the head of the Computer Science Laboratory. Professor Josef Basl, the vice-rector for International Relations and External Activities, participated in negotiation from the Czech University’s side.
"The Speech Information Systems Department is one of the youngest departments at ITMO University. It has been operating by the Speech Technology Center base since 2011,” Yuri Matveev says. “Therefore, we haven’t had any active cooperation with foreign counterparts yet. Although we have been implementing a joint graduate program with the University of Eastern Finland (Joensuu) for a second year. Agreements with universities in the Czech Republic and France will significantly expand our international contacts".
"President Rachid El Guerjouma is very interested in partnerships developing not only with our department, but with the ITMO University in general. University of Le Mans as well as our University trains specialists in the optics, mechanics and physics. We have a good basis for cooperation. Cooperation with the West Bohemian University will be carried out both in educational and research directions. Recently, the Czech University was provided with the latest equipment, with the support of the EU Government. Therefore, our cooperation will be based on the exchange: we’ll give them scientific basis and theory, and they’ll give us the opportunity to work with good equipment," Yuri Matveev says.
Development of partnerships with the Speech Information Systems Department is beneficial for foreign colleagues also due to the fact that the ITMO University Speech Technology Center actively commercializes its developments. This is a necessary condition for participation in the Horizon 2020 EU Framework Programme for Research and Innovation, aimed at the innovative economy development.
The main research direction of the Speech Information Systems Department is the of human-machine communication development. Today, various voice controlled mechanisms become real. The relevant technology is already used in many different areas. In particular, the VoiceGrid biometric system developed by the Speech Information Systems Department is widely used in Mexico to catch criminals. The project based on the telephone conversations analysis allowed creating the criminal base consisting of voice samples of suspects, defendants and detainees. Now identifying the identity of the speaker can be very fast. Access to the database is carried out in more than 250 police units in 32 states of Mexico. The number of solved criminal cases has increased significantly with the introduction of the system.
Another research direction of the Department is a sign language synthesis. For example, communication of a deaf-mute man with a man who does not understand sign language is almost impossible. The machine can solve the problem by acting as a "translator" from the sign language into ordinary language and vice versa. This development is of great social importance.