The university delegation visited the leading US universities 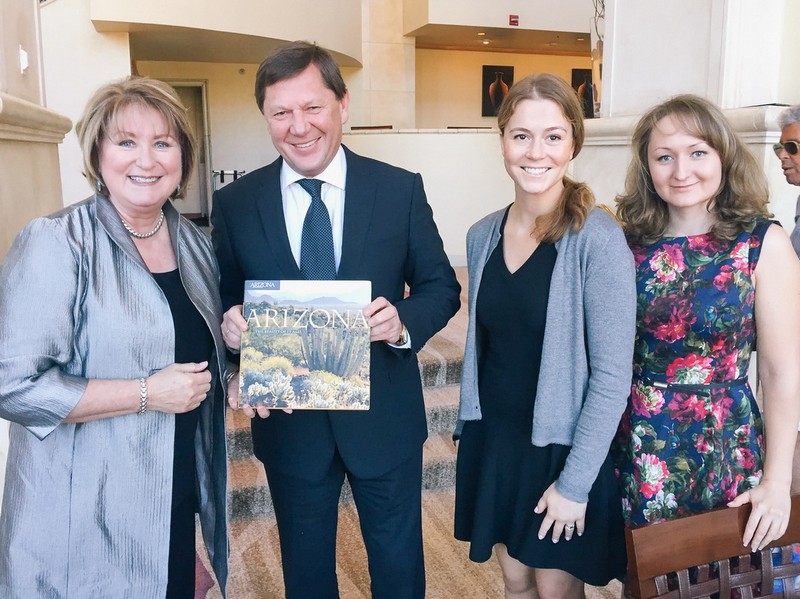 The purpose of the trip was not only about looking for new partners, but also the analysis of the American universities infrastructure and their practice of strategic planning. Therefore, the visit route was thought over very carefully: universities should be different, but similar in spirit to ITMO University.
An important part of the plan was a visit to Arizona, where there are two universities of particular interest - the University of Arizona and the Arizona State University. The first one is one of the three leading American universities in the field of optics and photonics, along with another university partner - the University of Rochester.
Several years ago, during the preparation of the first 5-100 project road map, The University of Arizona was chosen as the reference institution for ITMO University, that is, as an example of the successful development. Among the other people, the delegation from St. Petersburg was met by the graduate of ITMO University, the head of the one of the UA research laboratories. This became a natural result of the fragmented scientific cooperation between the two universities, which began in 2008.
Joint application to the "Eurasia" fund for participation in the increasing research and entrepreneurial potential of Russian universities program will serve to strengthen relations with the University of Arizona, which holds a 183 position in the QS World Ranking list. According to Daria Kozlova, this will be the beginning of long-term strategic partnership. The first phase of the program is designed for cooperation in the field of education: the ITMO University delegation reached a preliminary agreement on the establishment of joint masters programs in the fields of Science and Art and Photonics.

"University of Arizona is more of an academic than entrepreneurial university. It is fully consistent with its title: the university laboratories are impressive. In one of them, called Mirror lab, the research staff make mirrors for telescopes with diameter of eight and a half meters. They have all the stages of manufacturing" she says.

Vladimir Vasilyev noted the high level of cooperation between UA departments, which allows to carry out multidisciplinary research, which are the key for a university.
Arizona State University was the second American university, which was visited by the ITMO University delegation. This university pays special attention to the development of innovative activities. According to the Carnegie Classification of Institutions of Higher Education, the Arizona State University (ASU) belongs to a class of research universities with very high research activity («RU/VH»).The support innovations system, as noted by Daria Kozlova, is very similar to that used in ITMO University: at ASU young scientists form their start-ups in the same way and the university supports them.
Arizona State University has a different in many ways form of government: all managerial and organizational solutions goes from top to down, from the top management of the university headed by Michael Crowe, the rector, to administrative and scientific-teaching staff.
Center for urban science and progress, the young subdivision of the New York University, became another interesting thing for the ITMO University delegation. Today, this center is one of the most modern and progressive projects in IT-urbanism. It promotes the idea of "the city as a laboratory": New York for the NYU staff is a large experimental field, where they gather information, process it and use to improve the appearance of the city and the lives of citizens.

"We hope that in the near future, our undergraduates who are involved in the urban transformations field, will be able to join in the work of the largest laboratory in the world. In the meantime, we invited colleagues to participate in the Urban Forum, scheduled in May," Daria Kozlova says.

The ITMO University delegation visited its longtime partner as well - the University of California, Los Angeles (UCLA). A joyous occasion for the visit was the extension of the grant under the Eureka program, which finances the cooperation between the two universities.
Vladimir Vasilyev, together with professor Block, the rector of the university, signed an agreement to continue the work that has already given some great results: UCLA sports programming team took part in the ACM ICPC world cup final for the first time due to the preparatory training by experts and multiple winners of the competition from ITMO University.
Перейти к содержанию