Russian universities at the AULA international educational exhibition in Madrid

The 23th annual educational exhibition AULA (International Educational Opportunities Exhibition) took place in Madrid from the 4th to 8th of March. This year Russia was represented by universities participating in the Project 5-100 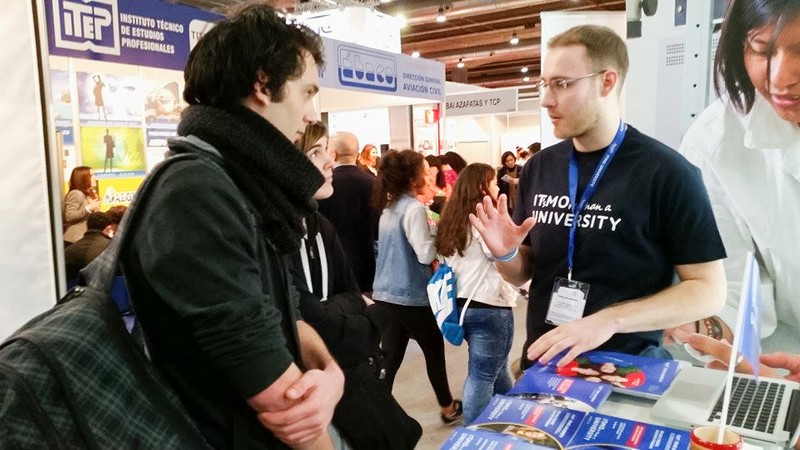 The AULA exhibition which is the largest education exhibition in Spain is held since 1992 under the auspices of the country's Ministry of Education.Every year it is visited by tens of thousands of students, their parents and teachers who want to learn more about education abroad.In parallel with the AULA-2015, these days there is a range of activities in the field of education: International Higher Education Fair exhibitions, International Education Material Fair and the Resources for education forum, where representatives of the educational community share their experience and discuss the problems of higher education.For five days one of the most modern and well-equipped exhibition centers in Europe, Feria de Madrid, became the center of attraction for universities and other educational organizations from around the world.
On average, several thousand universities are involved in AULA every year.In addition to the exposure part of the exhibition there are various workshops and seminars which help the school leavers to decide on their choice of further education and future job.Representatives of Russian universities have participated in the exhibition already, but the Project 5-100 has presented its booth for the first time.Apart from other participants of the project and exhibition, the University has cooperation agreements with four Spanish universities, among which are the Autonomous University of Barcelona, the Autonomous University of Madrid, the Charles III University of Madrid and the Pompeu Fabra University.As explained by Daria Kozlova, the head of the Institute for International Development and Partnership, the aim of the participation is not only the meeting with these partners and a new level of cooperation, but also the search for new targeted contacts.
The AULA exhibition gathers a lot of leading European universities every year. Now we give priority to the format of cooperation which comprises conducting short-term training programs on the basis of ITMO University. We invite university students to take part in summer schools, which are held in the spheres of IT-technologies, optics and photonics, the Russian language. We want to show the foreign students the level of education in ITMO University so that in the future they would want to participate in the long-term exchange programs. On the 7th of March students from Peking University are going to come to us, our programming champions will train them," Daria says.
In addition to foreign students, Sergey Melik-Bagdasarov, the Counselor of the Embassy of the Russian Federation in Spain, visited the participants of the Project 5-100 at the exhibition.
There is a very well seen constant interest to the booth of ITMO University. Pupils who are interested in our research areas, features of learning in the University are coming to the booth, as well as the representatives of foreign universities. They are interested in partnership opportunities, conditions of joint educational programs in the University," Dmitry Malkov, the public relations specialist says.
It is not the first time that ITMO University is taking part in the large educational activities on a par with the world's leading universities.In September last year, the university demonstrated its updated brand and educational opportunities on the XXVI International Conference of the European Association for International Education EAIE-2014 in Prague.