Parliamentarism in Russia was discussed at Mariinsky Palace

On the 23th of April, an international scientific-practical conference "Lessons of parliamentarism: historical experience and contemporary practice-2015" was held at the Mariinsky Palace Grand Hall. The event was organized by the Legislative Assembly and the Council of Rectors of St. Petersburg. 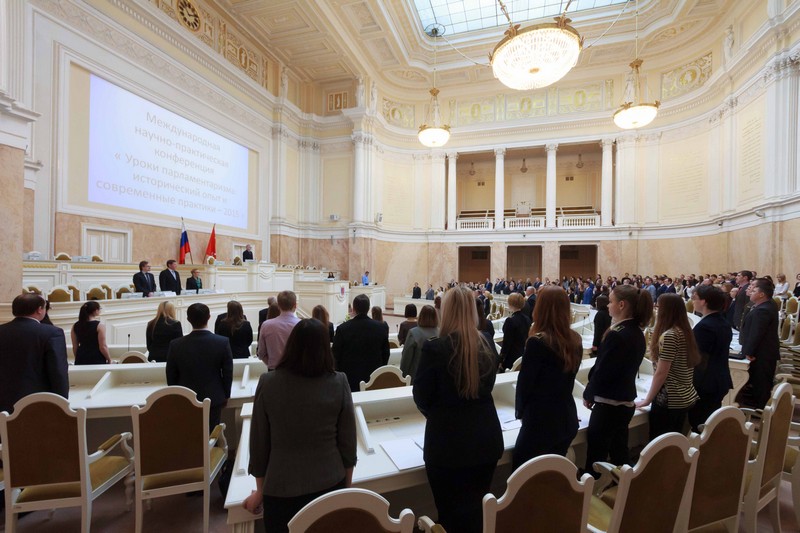 The idea of the conference emergence was explained at the plenary session by Vladimir Vasiliev, the ITMO University rector, the chairman of the Council of Rectors of St. Petersburg: "Event's format is quite unexpected: not only members of parliament, but also representatives of universities gathered in this room for the second time. Last year, I assumed that the conference would take place just once, but it aroused great interest. For students, in turn, it is helpful even to appear in the room where laws of our city are accepted, feel the atmosphere of the place, communicate with deputies in an informal atmosphere. "

The initiative to hold the conference came from Marina Shishkina, the deputy of the St. Petersburg Legislative Assembly, who was the main section moderator.

"I'm glad that a lot of people came to the conference. It means that the parliamentary system is a phenomenon, interesting not only for the current deputies, but also for other people. Someone of the speakers was nostalgic for Leningrad City Council, which was lively and democratic. People today lack the parliamentary culture," Marina Shishkina said.

Moreover, Alexander Konfisahor, an associate professor and doctoral student in political psychology at St. Petersburg State University, explained that politics is a work that needs professionals, but not just random people. The discussion moderator agreed with him and emphasized that parliamentarians in politics need to know more than their voters, otherwise, the deputy just would not be able to help. Furthermore, regional parliaments, which are now a special subculture, were discussed during the section. Marina Shishkina mentioned that region lawmakers feel the "human moment" more strongly.
The conference ended with a sightseeing tour of the Mariinsky Palace, where guests were given information on the history of the national parliamentarianism, which originated within its walls.