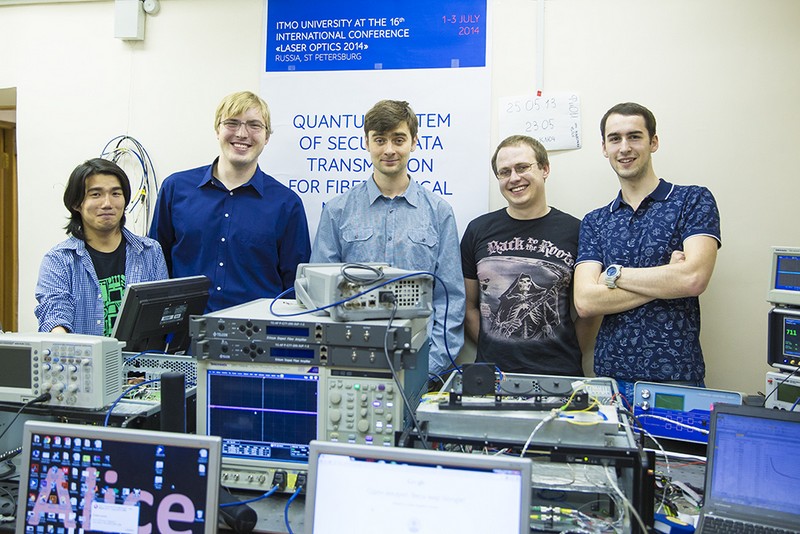 Each student worked with one of the scientific laboratories of the International Institute “Photonics and Optoinformatics” of ITMO University. They not only worked in teams but also carried out their own research that contributed to the overall work of the lab. Research focused on three areas: femtosecond optics and femtotechnology, terahertz medicine and quantum science.

Project Manager Dr. Mikhael Hodzinksy noted that the student experiments were carried out at the lab for the first time.


“It’s possible to say that two weeks they started from scratch and achieved tangible results,” he said. “The participants of the school were first year students from University of Rochester. Our student, Se Wha Lee, was able to apply basic science concepts that she’d already learnt to real research very quickly. In two weeks we taught them how to use Matlab, Origin, LaTex and other software. So along with carrying out experiments they also had a crash course in data analysis, programming and equipment handling. It was obvious that the students are very goal oriented and are excited about working science. We’re hoping that during their Masters work they’ll want to visit St. Petersburg and our lab again.”

Students of University of Rochester Guntis Rutins and Se Wha Lee talked about working at the labs:

Did you have any experience of working in a lab before the Photonics School at ITMO University?

Guntis Rutins: I’m a third-year Bachelor student and have lab experience but mostly it’s doing work that’s part of the curriculum. At ITMO University we did actual real research, which was a lot different. Theoretical studies that as part of the summer school were also very helpful.

Se Wha Lee: “At Rochester I’m a freshmen (first-year student) so my knowledge that was necessary for productive research was limited. Working in a lab at ITMO was a quite a challenge for me and I’m not sure how I would have handled it had it not been for our Russian colleagues who were very attentive, friendly and patient.

Is your research at ITMO connected to your scientific interests and specialty?

Guntis Rutins: At the Bachelor level we’re mostly getting the general groundwork without a scientific specialization. That will happen in the Master’s program. That’s part of the reason why an immersion into a narrow branch of science is such a great experience.

Are you going to apply the new skills?

Se Wha Lee: "Just the fact of having gone through this school will be a great line for my CV. Also, when I decide to join a scientific lab at my university, I will be able to rely on this experience and training. This will undoubtedly give me an advantage over other candidates and help me become a lab assistant.”

Guntis Rutnis: At our university we can’t just approach a professor and say “I want to do science.” You have to go through a selection process during which a professor that you’re in contact with will access your motivation and readiness for working in a lab.

What were your impressions of the city?

Se Wha Lee: St. Petersburg is an incredibly beautiful city. I enjoyed getting to know its architecture, some buildings are truly impressive. Other impressions: men in Russia are not used to shaking a woman’s hand and it took me a few days to get used to it. I was also impressed by how people treated each other on mass transport. I noticed several times what when seeing a senior person they’d offer them their seat. That’s cool.

Guntis Rutins: I was very impressed by how short the nights were. It got dark late and light just a few hours later. For me that was very unusual.

Did you get a chance to see a lot of sights?

Se Wha Lee: We had a packed schedule. For the first four days in St. Petersburg we had Russian classes and got up very early to fit everything in. For the most part we spent about 12 hours a day in the lab and would finish around eight or nine. Luckily when I was leaving the campus, it was still light and I could trick myself into thinking it wasn’t that late after all. Anyway, we went to Peterhoff, saw “Cinderella” ballet, visited Hermitage and the Russian Museum.

Guntis Rutins: Doing our two weeks here we hardly had any days off. The program of the summer school was very intense. We worked even on Saturdays. That’s fair because we mostly came for scientific knowledge.

What would you change in the program?

Se Wha Lee: I would suggest holding the school not in the beginning of June but in the middle of May. In the United States many students are looking for internships and work after the finals. And when they have to choose between a two-week summer school and a two-month program, they would choose the second. I would also add that the school would be a great fit for juniors and seniors, and judging from my experience can be challenge for freshmen.

Guntis Rutins: I’d like to spend another week in St. Petersburg. It would help spread out the work and enjoy sightseeing. But in general this was a very valuable experience and I will recommend the summer photonics schools to my friends.