ITMO University researchers visited RADIO- 2015 “Radio and Antenna Days of the Indian Ocean” conference. Ameenah Gurib-Fakim, president of the Republic of Mauritius, took part in the opening ceremony, where she met with Russian researchers and discussed radio engineering and radio electronics collaboration. 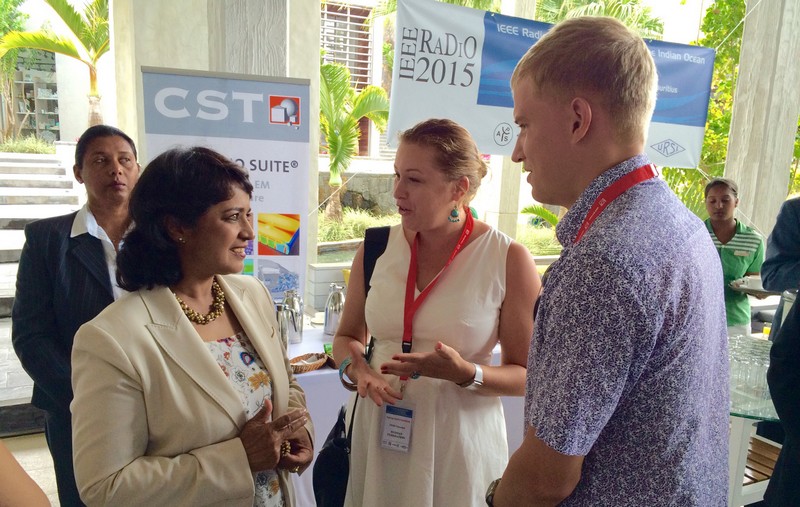 “Radio and Antenna Days of the Indian Ocean” (RADIO) is an international annual conference, which took place on September, 21-24. Every year “RADIO” brings together international researchers who present their papers related to fundamental and applied aspects of microwave and radio engineering, antenna systems and electromagnetic compatibility. Participants of “RADIO-2015” discussed electromagnetic radiation`s application in biomedicine, radio astronomy, nanotethnologies, and wireless communication systems.

Polina Kapitanova and Stanyslav Glybovskiy, researchers of the lab of Nano-Photonics and Metamaterials, represented ITMO University at the conference. Young researchers shared experimental development connected with applications of metamaterials in radio-frequency equipment such as wireless power transfer  and MRI systems.

Ms. Gurib-Fakim met with Russian researchers and discussed the impact that radio science has on everyday lives as well as importance of joint scientific and technological projects.  Ms. Gurib-Fakim took an interest in inventions of St. Petersburg scientists and noted the importance of technologies that were beneficial to society. Ameenah Gurib-Fakim is also a skilled researcher and a laureate of a variety of research prizes such as L’Oréal-UNESCO Award for Women in Science.

“It was such an honor for us to meet with Ms. Gurib-Fakim. Being a scientist she is also interested in research development. We had very fruitful conversation,” said Ms. Kapitanova.

This conference was organized by “Institute of Electrical and Electronics Engineers” (IEEE) three times. Pavel Belov, head of International Research Center for Nanophotonics ans Metamaterials of ITMO University, was a member of “RADIO” academic board.