ITMO University celebrated the 110th anniversary of its first graduation in St. Petersburg “SIBUR ARENA” on October, 10. Over 4,000 participants got to explore "ITMO City" with interactive exhibits, enjoy a 3D show and reconnect with their old friends. Vladimir Vasylyev, ITMO University`s rector, made an opening speech and congratulated the university together with Georgy Poltavchenko, governor of Saint Petersburg, and Vyacheslav Makarov, speaker of Legislative Assembly of Saint Petersburg. 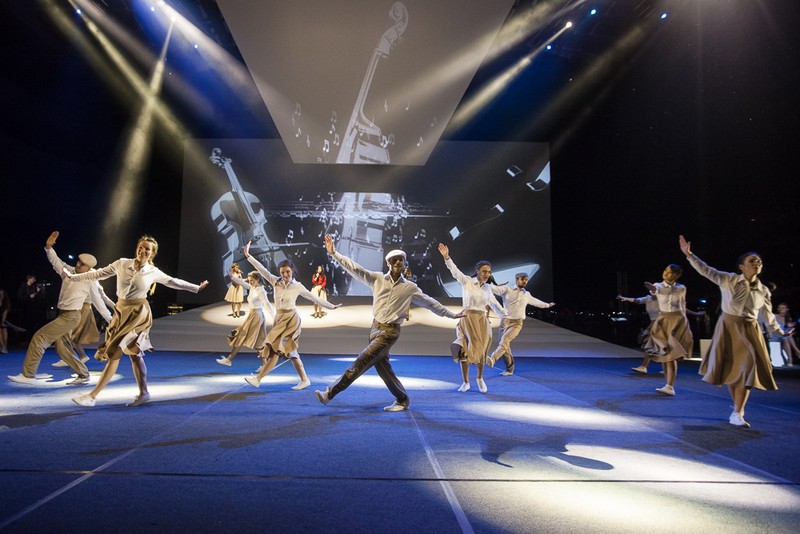 All evening “ITMO City`s” interactive zone was bustling with activity. Visitors could try out 3D printing and writing with a 3D pen under the watchful guidance of FabLab and Olymp lab staff. They could also put their arm around the hologram of the rector and get a few photos taken at the photobooth. FabLab showed off their new Facebook like counter that displayed Facebook love in real time.

One of the most popular areas was “Cafeteria” where the participants could sample cookies, marmalade and innovative ice-cream that students of Institute of Refrigeration and Biotechnology invented using liquid nitrogen. Then they could burn off calories shooting hoops in the “Sports hall” area. The career-minded could get face time with ITMO's partner companies at "Job Market.”

Alumni particularly active in student affairs enjoyed a presentation of ITMO University Student Council, which would celebrate 10th anniversary next year. Those who used to love camping with their classmates got to relive those evenings by the campfire at a "Yagodnoe" simulator complete with songs and glowing ambers but without the mosquitos.

And everyone could stock up on brand merchanise and get into school spirit at the store.

After visiting all areas of “ITMO City” students, staff and alumni took part in a grand celebration ceremony. Vladimir Vasylyev addressed all participants.

“We celebrate the 115th birthday of ITMO University. Moreover, 110 years have passed since the first graduation ceremony. We chose this date because today is 10th day of 10th month of 2015. This number is significant for us. I know that alumni who graduated at different times join us today. I hope that students, new comers, staff members who helped to organize this celebration are also here. ITMO University is an unconventional university. That is why we are looking for uncommon approaches and methods. It gives us an opportunity to be among higher education leaders,” said Mr. Vasylyev.

Georgy Poltavchenko awarded ITMO University rector with a diploma for “Contribution to Development of St. Petersburg and Russia.”

“Dear friends, I congratulate you with this anniversary. ITMO University is not only one of the best St. Petersburg universities, but also a brand of the city and even our country.  It is well known all over the world. Its graduates take part in all spheres of St. Petersburg`s life. We are proud of your achievements. Companies, organizations, manufacturing enterprises as well as administration of St. Petersburg are open for you. We need such specialists. It is true that future belongs to information technologies. It means that a great future is reserved for you,” noted Mr. Poltavchenko.

After the speeches, guests got to enjoy a 3D show titled "The Home Called ITMO” that touched on significal milestones throughout the university's history. The culmination of the show was live broadcast from the International Space Station where cosmonauts Mikhail Kornienko, Oleg Kononenko and Sergei Volkov congratulated the school with its anniversary.

“Working in space we use unique optical systems developed by Russian scientists. So we want to thank all of them as well as ITMO University`s professors and graduates who worked on such projects as “Mars-96,” “Vega,” and “Fobos,” said Russian spacemen.

From classic ballet to soundtracks from favorite movies to the final song that turned into a group chorus, the show was a treat for everyone.