A “like counter” is installed in the lobby of ITMO University's main building. Now Facebook love shines in real time. 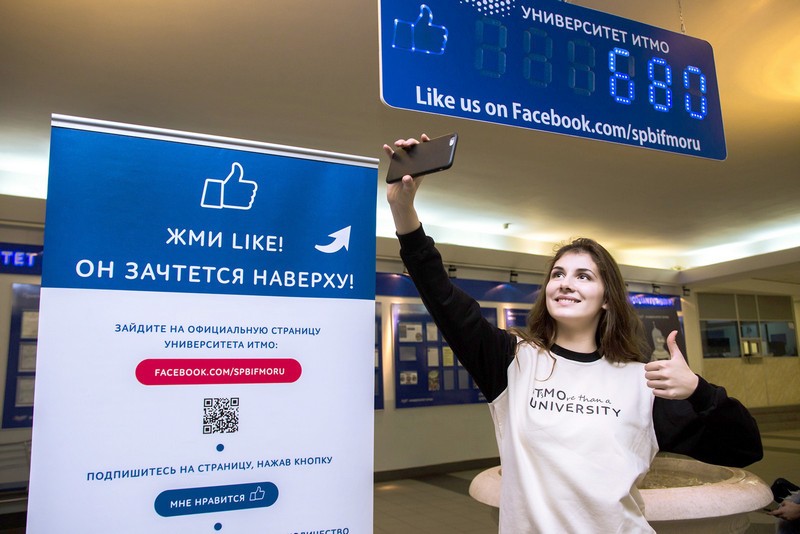 The “like counter” constructed by FabLab researchers shows total number of users that follow English and Russian  ITMO University Facebook profiles. Moreover, if someone clicks like button under news or pictures on these profiles a special "thumbs up" icon will light up. Thanks to a camera in front of the counter everybody can watch it online in real time

“We used acrylic glass as a base of this device. A frame has a special shape in order to draw visitor`s attention to the counter,” said Aleksey Schekoldin, head of FabLab of ITMO University Technopark. “To display numbers we also installed light-emitting diodes inside the device”.

An electronics section of the counter was also developed in FabLab: “Raspberry Pi” microcontrol unit and several circuit cards activate the device. An application providing server requests was developed by Ivan Korneev, student of the Chair of Computer Technology. Interacting with Facebook servers this program determines the number of followers and like clicks and send a signal to microcontrol units that switch diodes.

Artem Kudryavtsev, the head of Social Media Relations Office of ITMO University, told that an idea of the counter was inspired by French startup project “Smiirl”, which developed the same devices. However French counters were smaller and had a split-flap display while ITMO University researchers invented indicating technology.

“Thanks to Facebook we can inform our international partners and colleagues. We are also going to expand this project and install such counters connected with all official social networking services,” said Anna Veklich, Rector's Assistant on Public Relations.

Daria Kozlova, Vice Rector for International Relations, noted that “like” counter is an opportunity to become more recognizable in international community.

“Using extraordinary ways of promotion we prove that “IT`s MOre than a University”. We will use Like counter as a key element of   image-building events,” noted Mrs. Kozlova.