The delegation of Freiberg University of Mining and Technology visited ITMO University on February 4 to discuss a new Master`s program. Having presented several successful joint projects the universities planed to continue their research interaction. 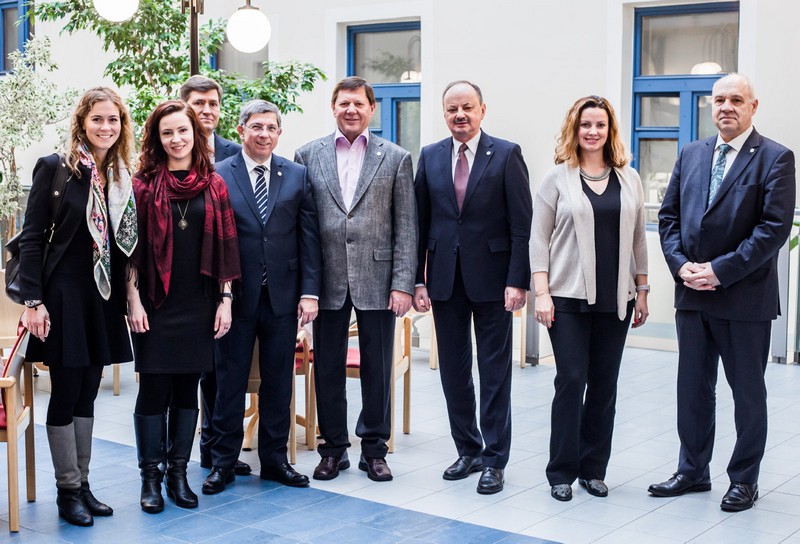 Freiberg University of Mining and Technology (TUBAF) is one of the oldest mining universities in the world. Despite the fact that its` core fields are mineralogy, geology,  metallurgy and power engineering the TUBAF also takes part in various projects connected with other areas. Thus Freiberg Mining Academy in alliance with ITMO University develops nanocarbon materials` research based on facilities of BESSY-II and European XFEL centers. The bilateral agreement between two universities resulted in initiating of Transnational Scientific and Education UNIFEL Center for Advanced Methods of Materials Research led by Alexey Romanov, head of Chair of Modern Functional Materials, and Sergei Molodtsov, TUBAF`s professor and European XFEL` principal. “Researchers of Freiberg Mining Academy are leaders in material analysis. For instance, indium and germanium were invented in the TUBAF. The research projects developed at ITMO University are also connected with modern materials applicable to upgraded processors, lasers and photonic systems. We develop theoretical models of materials` features and then test the results comparing them with experience-based data presented by German colleagues. These joint efforts aim at development of optical electronic systems,” said Mr. Romanov.

The delegation headed by Dr. Klaus-Dieter Barbknecht, rector of Freiberg Mining Academy, came to St. Petersburg in order to meet with ITMO University`s officials. Last year the partners decided to launch a new Master`s program. At this meeting they discussed candidates for the supervisor, extra partnering universities, and language training courses for newcomers and Master students.  Ekaterina Tulugurova, head of International Educational Programs Department, noted that the program would be launched next year.

“We are going to attract not only students of ITMO University and the TUBAF, but also young researchers from universities of Russia, Germany and other countries.  Following this Master`s program the students will receive new experience taking part in European XFEL project, which serves as a base of Russian-German scientific interaction. It is one of the most important cooperation research areas for both Russia and the European countries. I hope that the program will be upgraded by adding new options such as student exchanging,” mentioned Ms. Tulugurova.